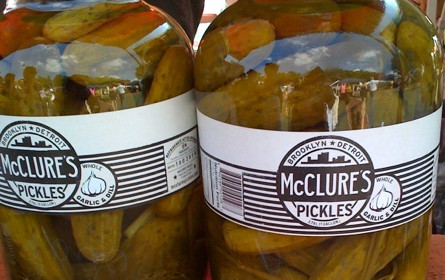 NEW YORK â€“ Eight months ago, Bob McClure, the co-owner of McClure's Pickles in Brooklyn -- purveyor of all kinds of preserved cucumbers in flavors ranging from chili-spiked to garlic dill -- decided to start a distribution cooperative.

His company used one delivery van to distribute the products of other local, smaller manufacturers for a rental fee, with the idea it would help the companies reach more retailers. The companies would upload their invoices to a website and distribute their products together in the hopes of forming a collective pool of clients.

But he said eventually the amount of products made the delivery process too expensive and he had to discontinue the distribution cooperative.

“There is a need for development on a larger scale complete with warehousing, staff, and marketing," McClure said.

Food distribution might not be exactly glamorous, but for many small companies it is a critical link between success and failure. Now the City Council is funding a study by the Pratt Center of Community Development that Speaker Christine Quinn says aims to find ways to “unlock the economic potential of our local food economy."

The study will look at local city food manufacturers â€“ a $5 billion industry that employs over 14,000 workers.

"This commercial sector has remained a bright spot throughout the recession and has established itself as a hotbed of economic activity in the city," Quinn said in a statement announcing funding for the study earlier this week.

She first announced the idea for the food distribution study in a speech before the Association for a Better New York last fall.

Adam Friedman, the director of the Pratt Center for Community Development, said there are "hundreds of food manufacturers scattered around the city, making it a complex network.”

Friedman said the study, which has already started and will involve talks with dozens of local food manufacturers, would look at how to “improve competitiveness within the business environment for local food companies in New York City and reduce the environmental impacts of vehicle emissions in traffic.”

He said there was a lot of redundant food trucks that go to grocery stores and that one main goal of the study is to find ways for local food manufacturers that deliver to the same groceries in Manhattan to “maximize their benefits."

He said the co-op McClure organized for fellow local food manufacturers is one example of that model.

Friedman said the study will also examine ways to exchange information between producers and stores.

“You can get a lot of insightful market information from the grocer, such as price points, competition, and suggestions," he said.

The study, scheduled to be completed by June 2013, will also look at how small companies looking to export their goods can get their products to new markets and gain access to trade shows.

A 2007 study titled “More Than a Link in the Food Chain” conducted for the mayor's office by the the Fiscal Policy Institute and the New York Industrial Retention Network (now a project of the Pratt Center) revealed that local food manufacturers export a total of 34 percent of sales or $1.6 billion to companies outside the city.

Daniel Sklaar, the owner of Fine and Raw Chocolate, said he started off distributing his confections on the subway, then later graduated from bicycle to truck. He also joined McClure's co-op when it was around, and also began shipping his products.

He said he would like to see the study focus on the challenges local food manufacturers have with overseas distributors.

“It’s very challenging. Essentially you have to deal with rigorous amounts of paperwork and logistics, shipping, and international brokerage," he said.