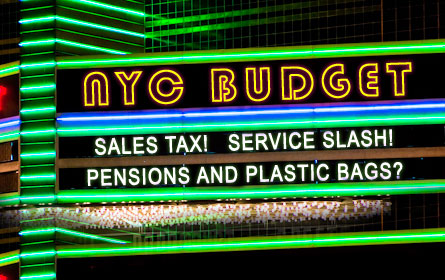 If Mayor Michael Bloomberg's fiscal year 2010 budget proposal were a Broadway show, the sales tax would be headlining. Not far down the marquee, you might see $3.4 billion worth of slashed services, a city work force reduction of more than 13,500 and a five-cent tax on plastic bags. At curtain call, the audience gets a new pension tier aimed at new hires.

But the set and the players seem strangely familiar. Little has changed in the mayor's executive budget for fiscal year 2010 since his preliminary budget in January. With the exception of the sales tax (a proposed increase the mayor would like to double from what he envisioned in January) and health benefits for unionized city employees (which won't be tackled until next year), the administration's proposal adds little new to this year's budget debate. In these tough economic times, Bloomberg is relying on the old standbys of tax hikes and service cuts to close a $4.8 billion gap.

(See if you can fix the city's fiscal woes. Play Balance.)

Fiscal year 2010 is no opening night. Most City Hall observers say it feels more like a revival. But now with an election six months away, how will the budget's critics -- from the City Council to Albany to unions to advocates -- react?

It Could Be Worse?

Act I: Enter stage left, Bloomberg dressed in a charcoal suit and red tie with a laser pointer in tow.

On Friday, the mayor released a $59.4 billion budget proposal for fiscal year 2010, which starts in July, slightly down from this year's $61.2 billion budget. At its core, the proposal relies on cuts to every city agency -- reductions that climb up to 29.5 percent in some cases, such as the Health and Hospitals Corp.

In total, the mayor is proposing to cut $3.4 billion in city spending. With every agency and department on the chopping block, Bloomberg said everyone has to make do with less.

Despite the cuts, the mayor has committed to no layoffs for teachers and uniformed police officers. To cut back, the Police Department will see 395 members of its civilian workforce laid off and a reduction of 125 traffic management enforcement agents, mostly through attrition. The department's controlled operating expenses, which do not include pension, debt service or health care costs, will be slashed by 10.9 percent.

The Department of Education will see a 13.3 percent reduction in controllable spending, mostly from discretionary funds allocated to school principals, according to the mayor's proposal. It will most likely require "personnel reductions," the proposal states.

In total, this plan would layoff 3,759 city workers.

This graphic shows the percentage reduction of controllable city spending department by department. Department figures include reductions in city spending as well as any revenue (such as increased fees) the departments are implementing to close budget gaps. We included the city’s largest layoff figures. Figures were provided by the mayor’s office.

With the economy floundering and Wall Street still suffering, Bloomberg said the city's revenues are down by $5 billion since 2008. This fiscal year, revenues from the city's real estate transaction tax fell by 47.1 percent, while economically sensitive tax revenues on the whole, from the sales tax to the personal income tax, have decreased 14.1 percent.

Though federal stimulus funding, including $1 billion that would go toward Medicaid, has propped up the city somewhat, it is not enough to cover the revenue losses of the last year.

Much of what the mayor proposed will need approval from Albany. For example, the mayor has called for increasing the city sales tax by 0.5 percent to 8.875 percent (in January he proposed an increase of .25 percent). He wants to eliminate the sales tax exemption on clothing sales below $110 and implement a five-cent tax on plastic bags. These measures could raise $1.05 billion in revenue, if the State Legislature approves them all.

This fiscal plan also relies on $400 million worth of concessions from the city's unions, including the creation of a new pension tier, which would lower retirement benefits for new hires. The pension tier too would need Albany's approval.

Even with all of these actions, the mayor warned, the city still faces a $4.6 billion budget gap in fiscal year 2011.

The Other Side of City Hall

Act II: Enter the City Council. All 51 members grimaced, primarily because of the sales tax.

Calling an increase in the sales tax "regressive," City Council Speaker Christine Quinn, a usual Bloomberg ally, has set the stage for a sales tax showdown between the two sides of City Hall. Most City Council members do not support an increase in the sales tax. Earlier this year, Quinn had proposed increasing the city's personal income tax on residents making more than $300,000. Because the state implemented a similar proposal, she has said the council will explore other revenue options. For now, it appears, the sales tax will not be one of them.

"I continue to believe that increasing sales tax is a regressive way to generate revenue because it places an unfair burden on those who have the least," said Quinn in a prepared statement. "The idea of eliminating the tax exemption on clothing only compounds that burden."

Finance Chairman David Weprin agreed on Friday and said that he was not ready to sign onto the proposal, even though he understood how tough times are. Also at issue for the council, said Weprin, are agency reductions. The council is concerned over cuts to fire engine companies and the amount of layoffs at city agencies.

Specifically, members of the council took issue with the mayor's plan to reduce the number of firefighters at 64 engine companies by one so that four individuals would staff each engine. The move would not close any firehouses nor would it layoff any firefighters. City officials said about 140 other engine companies already have the same policy. This and other cuts would reduce the department's controllable spending by 10.2 percent.

In addition, critics said that by laying off workers and cutting human services, the city would hurt those who need help the most.

"Once again, he's balancing the budget on the backs of poor people," said Councilmember Charles Barron, a perennial Bloomberg critic. "If you want to increase economic activity, you don't increase the sales tax."

As in most budget years, the council is expected to focus on cuts to social services and libraries. Weprin said this budget would do away with six-day service, which the council has fought to protect for the last year.

Act III: Advocates take the stage, and they aren't happy.

To them, these cuts are just an encore presentation of those that the city approved last year. Another round -- particularly from the human services sector -- has left many reeling.

So much so that they are taking to the airwaves. On Friday, the Coalition for the Homeless released an ad airing on NY1, which calls the mayor's new budget "ruthless." According to the coalition, the mayor's plan would close two drop-in centers for the homeless, Peter's Place in Chelsea and the John Heuss House in Lower Manhattan. Drop-in centers elsewhere could also see a reduction in operating hours from 24 hours a day to 13 hours per day, under the mayor's proposal, the coalition said.

"While the federal stimulus money provides vital funding to restore cuts to homeless prevention, the mayor's budget closes drop-in centers and contains cuts to family and adult shelter providers that will harm homeless New Yorkers," said Mary Brosnahan, the Coalition for the Homeless' executive director, in a prepared statement. "It's sad that at a time when we are seeing record family homelessness, New York City can find funding for gold plated stadiums but not for these vital services."

Elsewhere, advocates have said the budget would get rid of thousands of after-school slots and slash senior centers. More than 10,000 slots have been cut from a city after-school program, said Nancy Wackstein, the executive director of United Neighborhood Houses of New York.

"After school is something that supports working parents and gives kids opportunities," said Wackstein. "This will be a very, very serious impact on the community."

City officials said the city would not close any senior centers, but would reduce funding to them, possibly threatening some programs. The city also plans on saving money by cutting the time adolescents spend in foster care and scaling back youth summer programs. The vast majority of the $3.4 billion worth of agency cuts were announced in January.

Some federal stimulus money, advocates say, has helped save cuts to the city's meals on wheels program. But, the cuts that remain, they say, are severe.

Unions Get a Break?

Curtain call: The city's labor force marches on stage. Some are relieved, but others balk.

A crucial element of the mayor's plan in January was to require that unions contribute 10 percent of their health insurance premiums, which could have raised about $357 million (most currently contribute nothing). On Friday, the mayor announced he was not confident that the city's unions and the administration could come to an agreement in time for this budget cycle. In response, he said he would delay any change until fiscal year 2011 -- conveniently after this year's mayoral election.

Some saw the move as political.

"It's not a surprise he doesn't want to shake any cages in an election year," said Doug Muzzio, a professor at Baruch College.

Despite abandoning the health care benefits, the mayor still is relying on compromises from the city's labor unions, including the creation of the new pension tier and other health care reductions, in order to close the budget gaps. Some unions don't think the proposal is palatable.

"What remained unsaid is that the pension improvements the mayor wants to jettison were in fact negotiated by city workers many times in lieu of salaries," said United Federation of Teachers President Randi Weingarten in a prepared statement. "For working and middle class families, pensions are a very important part of retirement security."

Weingarten said her union would be willing to consider retirement incentives and savings from their health care benefits. Other unions, including the city's largest municipal workers group, District Council 37, released statements in opposition to the mayor's plan.

According to some reviews, this budget production could get a lot worse.

About $1.5 billion of the mayor's plan to close the budget gap relies heavily on Albany. This year -- and in plenty of years past -- the State Legislature has failed to act on a plethora of issues (see the recent debacleover the Metropolitan Transportation Authority bailout).

Relying on upstate to solve the city's fiscal woes may not be the strongest strategy, say critics. "I want to see a real plan," said Citizens Budget Commission President Carol Kellermann. The mayor's proposal is "grim," she said, but probably does not go far enough. "I think things may be more serious than this," she said.

In an election year, the mayor's options may be limited -- heeding the call of re-election rather than ruffling feathers. If Albany doesn't approve these measures, then there may be little else for the mayor to turn to.

"Who is he cutting?" asked Muzzio. "Are you hurting a powerful voting constituent? In a sense you cut on the backs of the weak because they don't vote."

And who knows in this economic climate whether anyone can get a standing ovation.