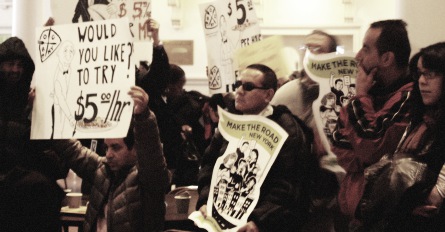 NEW YORK — Earlier this week, at the Church of the Holy Apostles in Chelsea, about 50 people waited in line  with cafeteria trays to have an early Thanksgiving lunch consisting of an apple, hot sandwich and cider.

As they came to the end of the line, they were asked to sign a card appealing to New York State Senators to pass legislation to raise the minimum wage by $1.25 to $8.25.

It is unclear whether politicians will be listening to the message as they head into the holiday weekend.

Minimum wage was supposed to be on the agenda for a special session of the state Legislature this winter and it was a popular talking point across the state during this month’s elections.

But many lawmakers are now focused on recovery from Hurricane Sandy and prospects for a special session are  growing slimmer by the hour. Control of the State Senate is also in chaos and the popular governor, who could push lawmakers into a deal, has waffled on whether a hike in the minimum wage is politically feasible at this time.

In spite of the dimming hopes for minimum wage, activists and spiritual leaders who gathered Monday at the Church of the Holy Apostles, home of the largest emergency soup kitchen in New York City, were undeterred. They had chosen Thanksgiving Week to time the launch of their statewide campaign to call on legislators to pass minimum wage legislation, bringing together activists, spiritual leaders and unemployed New Yorkers.

Mark Dunlea, executive director of Hunger Action, which helped organized Monday’s event at the Manhattan church,  said the hurricane was no excuse for putting off a special session or a minimum wage hike.

“We should have a special session and fill a gymnasium in Queens,” Dunlea said, referring to one of the hardest-hit regions in the city. “Get all the legislators down there, have them pass the minimum wage hike and everyone can help out with Occupy Sandy and see what really is going on.”

Sen. Joe Addabbo, who represents some of those hard-hit parts of Queens, said he would like to go back to Albany to do “the people’s work” — including passing legislation to increase the minimum wage.

“The governor can force us to go there, but he can’t force us to do work and that is unfortunate,” he said. “I thought we would be back in Albany and addressing important legislation. The time frame on the minimum wage is flexible. If we had to wait to January and the Democrats are in charge we will pass it then, if it has to wait til January and the Republicans are in the majority we will have to be a loud voice for it. But I really thought we would be back in December to work on this.”

In front of the soup kitchen’s altar, religious leaders, community advocates and unemployed residents gathered around a roundtable, passing a microphone to amplify the message.

The Rev. Raymond Rivera, president of the Latino Pastoral Action Center in Brooklyn, said it would be absurd to increase legislator’s wages while the minimum wage remains at $7.25. “Before you raise your own salaries, first deal with minimum wages,” he said, referring to pay raises for legislators that was also expected to be discussed at a winter special session.

But some business groups and legislators say hiking the minimum wage would kill jobs in the state.

Ken Pokalsky, of the Business Council of New York, said his group thinks a wage hike could cost jobs.

“We estimate the minimum wage hike that  has been talked about would cost about $2,900 per job. Our point is: Don't create jobs by increasing cost of labor. If you increase the cost of something, whether it is labor or gasoline, people are going to buy less of it,” he said.

Pokalsky pointed to a 2008 study by Cornell professor Richard Burkhauser that estimated a minimum wage increase in New York would cost 16,000 jobs, and that only 20 percent of the benefits achieved by a hike would go to poor households. “The money comes from somewhere,” Pokalsky said. “Maybe you increase prices, maybe you have fewer jobs at a higher wage, maybe less investment elsewhere or maybe you are making no money.”

A recent study by the office of state Sen. Jeff Klein disputed that notion, finding that a hike would increase wages for over one million workers, generate $600 million in new consumer spending and translate to over 5,000 new full-time jobs.

Business For a Fair Minimum Wage, which counts Costco and the Greater New York Chamber of Commerce among its members, also touts research that says raising the minimum wage does not cause job loss.

Dunlea, meanwhile, has his attention focused on Cuomo, since the governor declared a minimum wage hike was politically dead this summer after the Assembly passed Speaker Sheldon Silver’s bill to increase the minimum wage. The Senate did not take up the measure.

Cuomo has immense political clout and high approval ratings from voters, but even if the governor came out in full support of a hike he would need to get the State Senate to pass the legislation and it isn’t quite clear at the moment who will control the chamber come January.

Cuomo supported a number of Republican Senators but his endorsements were not enough to protect their majority after Democrats picked up at least three seats. Now recounts and backroom deals will decide whether Democrats or Republicans control the chamber.

Senate Democrats have made raising the minimum wage part of their general platform — Mike Gianaris, head of the Senate Democratic Campaign Committee, has touted his conference’s support for a wage hike all year, while Senate Republicans have generally opposed the hike.

“Whether this is addressed in a special session or in January, I believe our candidates won with this across the state,” said Democratic state Sen. Gustavo Rivera, of the Bronx. “But we have to think about the recovery of  the state, so I defer to the governor and the people who were hurt by the storm about when it is done. But I believe this is the  reason why we need to be in the majority. It is clear we have a mandate. We got more votes than Republicans across the state and we  won talking on these issues.”

Senate Majority Leader Dean Skelos called a minimum wage  hike a “jobs killer” and said that a hike would hurt small businesses. Meanwhile, news reports indicate that the Independent Democrats have made a hike in the minimum wage part of their platform and will only back a a Majority Leader who intends to bring the measure to a vote. The four legislators are being courted by Republicans  and Democrats.

But the political wrangling means very little to those gathered at the Church of Holy Apostles. For some, making any amount of cash is a challenge.

Willard Grant, 30, is from Jamaica, Queens, and has been unemployed for several years and is a regular at the Church of the Holy Apostles soup kitchen. Grant has been living in a Port Washington shelter for six months. “I’m not proud. It’s sad, shameful, and embarrassing but I’m taking things one step at a time,” he said.

He has been moving from shelter to shelter because he doesn’t like being on the streets.

Grant says he lost many friends and family members when he began staying at the shelter but explains he does not like asking people for things or relying on others for money.

Two and a half years ago, he lost his job as a stockboy lifting boxes into Jack’s 99 cent store for minimum wage and needed to work other off-the-book jobs because he said his salary was not enough to pay rent.

Now Grant says he rides his bicycle throughout all five boroughs doing athletic tricks and entertaining moves to keep others in shape. “Sometimes people give me money, but I don’t always like to accept,” he said.

Monday’s event to launch the statewide call for an increase in the minimum wage ended with a prayer from a religious leader asking to “turn the heart of our state legislators” and “hear God’s cries for social and economic justice.”

Photo of activists at Church of Holy Apostles by Bridget Woznica.