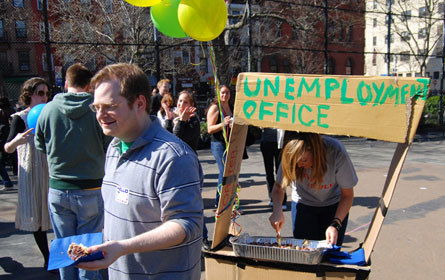 This story was done through a partnership between The Huffington Post's Eyes and Ears citizen journalism program and Gotham Gazette.

Joshua Deutch Dylan is a pre-bust transplant. A New Yorker for about 15 months, Dylan is already planning -- rather morosely -- his exit.

Dylan, who moved to Brooklyn from Philadelphia for a job as a legal technology consultant, was laid off six weeks ago. Now, he and his wife are struggling to get by on $430 a week -- courtesy of the New York State Department of Labor.

Their rent for a two-bedroom apartment in Bay Ridge is $2,300.

Their Volkswagen payments have been deferred just two months.

They are thinking about moving in with Dylan's parentsâ€¦ in New Jersey.

"We were doing pretty well for ourselves," said Dylan. Now, he adds, "Everything got sacrificed."

Dylan isn't alone. He is one of thousands of New Yorkers who lost their jobs in May, bringing the city’s unemployment rate up to 9 percent. (It was 8 percent the month before.) Now, approximately 361,000 New Yorkers are grappling with similar dilemmas, wondering how they will make rent, shell out for their Metro Card, and generally afford to stay in the country's most expensive city.

For this article, the Gotham Gazette collected stories about New Yorkers living on unemployment through the Huffington Post's Eyes and Ears citizen journalism program. (Read more about the initiative.)

Some say the State Legislature isn't helping. New York State's maximum unemployment benefit rate is $405 weekly. It's boosted temporarily to $430 thanks to the federal stimulus package, but it still pales in comparison to our neighbors. New Jersey gives $584. Massachusetts hands out $628. Pennsylvania's maximum is $558.

North Dakota pays a dollar more a week than New York does -- and you can bet the rent in Sioux County doesn't rival SoHo.

At one point this legislative session an increase seemed palatable. But now that the State Senate is sputtering and the Assembly may not return until January, most New Yorkers who are sans employment will have to find more creative ways to make ends meet.

A Day in the Life of the Unemployed

Janet Raiffa made more than $200,000 a year as head of recruiting for Orrick, Herrington, and Sutcliffe -- one of the largest law firms in Midtown. A mid-career professional in her 40s, Raiffa owns a two-bedroom apartment in Park Slope, which she refinanced in March, bringing her monthly payments to $3,000.

That same week, she was laid off, and her six-figure salary morphed into $430 a week -- before taxes. 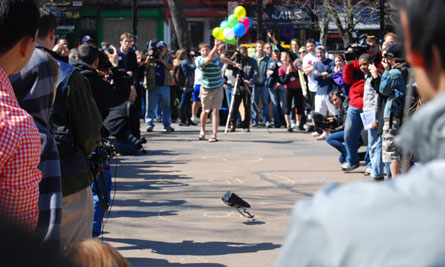 Fortunate for Raiffa, she has substantial savings and can bide her time looking for future employment. So, she bird-sits for $25 an hour. She gets cash to collect signatures for politicians petitioning for this fall's election, and she writes a blog for the 405 Club -- an unemployment network whose namesake is a tribute to the state’s weekly stipends. Raiffa has even gotten paid to go to the movies and check out the upcoming trailers.

"I haven't started babysitting again, but I am actively considering it," she said with a chuckle.

Raiffa takes it well. But other New Yorkers are finding their situation harder to accept. According to the National Employment Law Project, New York's unemployment benefits only replace 27 percent of an average weekly income.

That income still has to cover the laundry, groceries and the other tabs of living in the Big Apple. According to the Bureau of Labor Statistics, items here can be about 90 percent more expensive than in Chicago. A can of tuna may cost $1.60 on the Upper East Side, according to the Council for Community and Economic Research, but it will cost 94 cents in the Hollywood Hills and 81 cents in Motor City. The cost of a quart of whole milk averages $2.22 nationwide. In TriBeCa it goes for $2.64, according to the council.

The city, according to some estimates, may have the highest utility costs in the country. Water rates are climbing, and the subway fare is slated to go up another 25 cents on Sunday.

The costs, for Jeremy Hoekstra, add up.

“Fast food is a special occasion,” he quips.

Nowadays even a roundtrip subway fare is a questionable expense â€“ which is taking a serious toll on the former human resources administrator’s social life.

“The most horrible thing about it at first was I was friends with my coworkers. â€¦ Everyone at work were my best friends,” said Hoekstra, his Texas accent barely noticeable. “The feeling of loneliness sets in immediately.”

For now, like Raiffa, Hoekstra manages to get by. On the unemployment rolls for about six months, the 29-year-old has already sent out more than 200 resumes. He has had six interviews. Hoekstra, like thousands of others, is about to surpass his 26th week of unemployment benefits.

In better times, 26 weeks would be the cutoff. Lucky for Hoekstra, Gov. David Paterson signed another extension of benefits for 13 weeks last month, which is funded by the federal economic stimulus package. With that, some New Yorkers could receive unemployment benefits for a maximum of 72 weeks.

For some New Yorkers, those benefits are set to expire in August, said Leo Rosales of the state Department of Labor. Currently, Congress is not considering another extension, according to the office of Rep. Jerrold Nadler.

“We want to get the point across that these benefits are a safety net,” said Rosales. “It’s not a salary. It’s not an income. It’s temporary support to get them through these tough times, and there is an end date coming.”

So far, the state has borrowed about $1.3 billion from the federal government to cover those unemployment checks, which add up to $100 million weekly. It expects to borrow about $2 billion by year’s end.

But any extension doesn’t solve the real problem, say advocates. A bill introduced in the Assembly and the State Senate would have increased benefits incrementally for the next three years, going up to $475 weekly in July, and $50 every year thereafter until 2012. In future years the benefit would be set at half the average weekly wage. The bill was not taken up by the Assembly before they departed Albany last week, and its fate in the Senate seems dismal, considering the current stalemate.

For now, the unemployed have to make do with what they can: food pantries, free events, the public library (described as a “godsend” by one unemployed New Yorker). Some have even turned to food stamps -- though to get them you have to bring in less than $1,127 a month, which will exclude anyone who takes home the maximum weekly benefit.

Others just rely on generosity of others.

Speaking from his Midtown home this week, Tom Adcock, a New York Law Journal reporter turned unemployed novelist, lamented that his 62 years have made him virtually unemployable. But, he adds, he’ll get by.

"I can't afford to join friends in restaurants," Adcock said. “Tonight I’m entertaining at home. Hopefully, my friends will not come empty handed.”