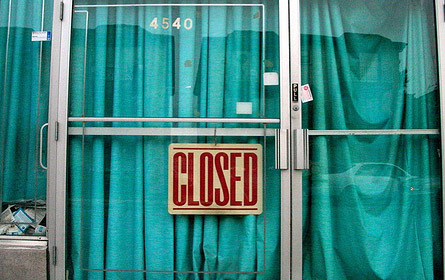 Federal Reserve Chairman Ben Bernanke says the recession is "very likely over at this point," although he does say that "it's still going to feel like a very weak economy for some time" because unemployment will remain high.

Grossly understating serious crises is part of the job description for the fed chairman, and Bernanke has certainly fulfilled his role here. The banking crisis may seem like it's over (for banking executives who still have their jobs, anyway), and gross domestic product may technically increase in the third quarter (in large part because of the Obama stimulus package), but the financial crisis tore through the American economy like a category 5 hurricane, and it will take more than a few more months to clear out the wreckage and for millions of people re-build to their livelihoods.

Americans will be reeling from the effects of the "Great Recession" for some time. That name is apt since the current crisis is, by far, the longest and the steepest economic downturn since the 1930s. Seven million jobs lost nationally, 15 million people officially unemployed, millions losing their homes and millions losing billions in retirement savings.

In New York, a record 875,000 people are unemployed statewide, 50,000 New Yorkers lost their homes to mortgage foreclosure last year, and there have been 50,000 personal bankruptcies in the 12 months through June. Here in New York City, the official unemployment rate jumped to 10.3 percent in August, more than twice the level in the early months of 2008. It's time to take a closer look at how bad the unemployment situation really is and what it will take to get the economy back on a track to sustainable prosperity.

The Great Recession is largely the consequence of poorly regulated financial markets that went on a spree of excessive debt and risk-taking, destructive lending practices, and the use of ill-advised exotic financial instruments. It was preceded by an expansion dominated by unsustainable and dangerous bubbles in housing and the financial markets. Too many Americans borrowed more than they could afford as they tried to maintain their standard of living while their wages did not keep up with rising costs,.

In short, for the past decade, we've had a bubble-prone economy and stagnant wages for most workers where too much of our growth came from either speculation or borrowing.

It's hard to tell from the recent behavior of New York's financial giants that a year ago they were on their knees with their hands out waiting to accept the-sky-is-the-limit taxpayer bailouts. Executives of the big banks have opposed serious financial regulatory reform, rushed to resume giving themselves enormous bonus and compensation packages, and picked up where they left off in managing financial markets solely to pad their own bottom lines regardless of the impact on other businesses or the American people. As Dean Baker -- one of the few economists who was worried by the housing bubble as it inflated -- recently noted, they haven't even stopped to utter so much as a "thank you" to their benefactors. 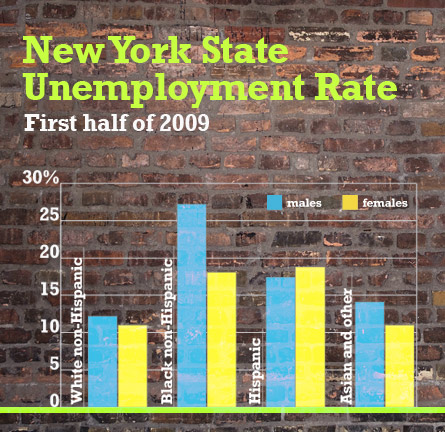 All of these rates are averaged over six months to make sure that the numbers are not one-month statistical flukes, and state, not city, data was used because it provides a larger sample. Given the recent up-tick in the city's unemployment rate, it is very likely that the real unemployment rates for black and Hispanic New York City workers are now 20 percent or higher.

Given the severity of the financial meltdown, a lot of attention has focused on job losses in finance. Certainly, there have been significant job cutbacks on Wall Street and in some other parts of the finance sector. Over the past year, employment has declined by 36,000 in the finance and insurance sector.

The greatest number of lost jobs in New Y has come from the manufacturing sector, with nearly 45,000 jobs lost over the past year. The administrative services sector has lost 32,500 jobs, retail trade 32,000, construction 23,000, professional services 22,000, wholesale trade 21,000, and information 9,000. aAll those other sectors combined have lost more than five times as many jobs as finance.

The decline in finance employment could end up being a lot less than was predicted nine or ten months ago in the immediate aftermath of the September 2008 financial market meltdown.

For many on Wall Street, bonuses running into the millions of dollars are not a thing of the past. In the city's commercial banking sector, unemployment is unchanged from a year ago, despite historically unprecedented turmoil in the market turmoil and the loss of tens of thousands of jobs elsewhere in the local economy (and millions around the country). Credit the extraordinary U.S. Treasury and Federal Deposit Insurance Corp. bailout measures, billions in taxpayer funds and limitless ultra-low interest loans courtesy of the Federal Reserve.

That's good news on the one hand; particularly in New York where spending by financial workers supports many jobs in other parts of the local economy.

Policy-makers, though, need to focus on how to restore the massive number of jobs lost throughout the economy. As often happens, innocent bystanders far from the source of the economic cataclysm are bearing the brunt of the devastation.

We need to recognize and deal with the pervasive economic insecurity of the vast majority of people. From stagnant real wages, to vanishing retirement savings, to foreclosed homes, to eroding health insurance coverage and skyrocketing health care costs, the economic challenge goes much deeper than just getting GDP growth into positive territory. The biggest challenge in putting the economy on a sustainable growth path is to recreate a wage-driven economy. What we've had is a finance bubble-driven economy.

In his recent speech on Wall Street, President Barack Obama admonished finance executives: "They (American taxpayers) shouldered the burden of the bailout, and they are still bearing the burden of the fallout -- in lost jobs and lost homes and lost opportunities. It is neither right nor responsible after you've recovered with the help of your government to shirk your obligation to the goal of wider recovery, a more stable system, and a more broadly shared prosperity."

The president went on to urge the financiers to help families modify their mortgages, more readily lend to small business owners, help communities and community development institutions, and "of course, to embrace serious financial reform"

The president's rhetoric is right on the mark.

Easing the mortgage foreclosure problem and getting banks to start lending are essential steps in moving the economy toward recovery. But, with sky-high unemployment and many debt-burdened American families reluctant to spend, another round of federal stimulus probably will be needed to help get us out of the deep hole the economy's in. And to get us on course for sustainable growth, we need policies to lift wages.