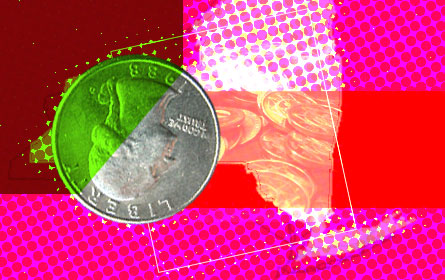 Gov. David Paterson fancies himself a financial doomsayer -- the man with the intestinal fortitude to stand up and shout the bad news. "The economy stinks and we have to cut the budget!"

Paterson blames his historically low approval ratings on the economy and the "tough choices" he has had to make to keep New York out of devastating financial straits -- along the lines of what California is suffering through. New York has yet to issue IOUs to its debtors as California has done, and Paterson has trumpeted that fact -- even taunting his potential opponents, daring them to get off their "deck chairs" and join him in the "ocean" with the sharks. But while Paterson has repeatedly sounded the alarm, he has not yet presented any kind of concrete plan to close the state's multibillion spending gap.

The state faces a mounting budget deficit but accounts of its size vary. Early estimates pegged the gap around $2.1 billion, but because income tax revenue has been lower than anticipated, Paterson has said the gap could reach $3 billion or more.

Earlier this summer Paterson promised to introduce a budget plan in the fall. In a July report, his Division of the Budget said: "To address this issue, Gov. David A. Paterson today announced that he will work with Lt. Gov. Richard Ravitch to develop an Economic and Fiscal Recovery Plan that will eliminate the current-year budget deficit and improve the state’s long-term fiscal health. The governor’s plan will be released in September." September is now officially over.

As summer wore on, Paterson spoke of having a special legislative session in the fall to address the deficit, but legislators countered that they wanted to see a plan before returning to Albany. Paterson also readied what seemed to be his financial super weapon: Ravitch, whom Paterson asked to review the state's finances. Paterson continued to push for the legislature to return to address the deficit but to no avail.

Meeting of the Minds

During that meeting last week, Paterson spoke again of his desire to make real cuts to spending rather than using the state's rainy day fund or raising taxes. If such cuts are not made, he said, "We would face the peril of being unable to meet our obligations, having our credit rating reduced, and getting ourselves into serious economic trouble."

Rather than returning for a special session the attendees agreed that staffers from Paterson's office and the legislature will meet to formulate a plan. Beyond that it seemed the attendees didn't find much common ground -- even on the size of the deficit. Skelos reportedly said it was only $1.6 billion. The Democratic leader, Sampson, responded to Paterson's $3 billion claim by saying his conference "doesn't believe in government by guess work. We need real numbers to provide real solutions." Silver and Kolb indicated they agreed with Paterson's projections.

This may be where Ravitch comes in. At the leaders meeting the new lieutenant governor said little except to suggest leaders look for common ground before looking for solutions. ""If we start off, hopefully with a common view of the numbers that we have to address, then we can talk about solutions in the context of that agreement, rather than fighting about solutions because we disagree with what the underlying numbers are," he said.

Critics like E.J. McMahon, director of the Empire Center for New York Policy, say that Paterson, despite his flagging poll numbers, needs to lead -- he has to present a plan and shepherd it through the legislature while taking the heat for tough cuts.

"You have to lay something on them," said McMahon. "You have to push for it and have to give them cover. You have to say it was hard but it had to be done."

McMahon said that having legislative and executive staffs negotiate over the size of the deficit and solutions to cut it is simply futile. "Legislative staffs don't work that way. They are reactionary; they don't initiate," he said.

Sen. Liz Krueger agreed that the governor should present a plan for the legislature to consider. "That’s why I advised my conference leader not to move to a date for a special session until we have a plan," Krueger said.

Who to Blame for the Delay?

Krueger said that criticizing the legislature for holding up a deficit reduction plan is simply "not a rational objection."

The legislature actually has a limited amount of input into the budget. The New York State constitution requires executive budgeting. In other words, the governor is responsible for presenting a budget plan after consulting with the appropriate departments. The legislature then can then strike things from the budget or reduce them but it cannot alter the budget in other ways.

Krueger pointed to the 2004 Court of Appeals decision Silver Vs. Pataki, which resulted in a ruling that the legislature had overstepped its bounds in a number of instances.

This does not mean the legislature has no say. During the extremely secretive budget negotiations last year, the legislature was seen as having won the budget battle with Paterson. Many of the large cuts to education and health care that the governor had sought were restored. To avoid making the large cuts that Paterson threatened, the budget imposed a tax on the rich and a number of newly implemented fees and surcharges, and used federal stimulus money.

McMahon, whose organization advocates reducing spending on labor benefits, education and health care, said that Paterson can't expect the legislature to make the tough cuts needed to actually reduce spending. "They don't know how to say no to anyone," he said.

Comptroller Tom DiNapoli bolstered McMahon's argument with his recently released Financial Condition Report for the 2008-2009 year. DiNapoli's report showed that the cumulative budget deficit could expand to $38 billion by the 2012-2013 fiscal year if current spending and income trends continue. The report finds that spending has increased 21 percent over the past four years and could go up another 22 percent by the 2012-2013 fiscal years.

"The state must look to the spending side of the ledger, rather than raising taxes and issuing large amounts of debt to pay for things it cannot afford,” DiNapoli said in the report. “New York needs a strong dose of fiscal discipline, which has been lacking for far too long. The State must make difficult choices today to fix New York’s persistent budget troubles.”

As McMahon points out, the legislature never wants to make spending cuts, especially in areas like education and health care, because of the cuts can incur the wrath o unions and the Working Families Party.

Some legislators are delaying making cuts because they hope a new round of federal stimulus money could save them from making further reductions. "They've been propped up by stimulus," McMahon said. However, so far, there is no new stimulus plan and, McMahon said, "You'd be hard pressed to find anyone in Washington who thinks that" there will be.

Krueger said the state still is finding that certain money has been allocated to New York through the stimulus plan, and those funds help. "I would like to see the stimulus continued," she said, "but it's too early to tell." Ravitch warned that the state could face "cataclysmic impact" if the stimulus is not extended past 2010.

In any event, Krueger said, real cuts must be made -- and quickly. "We need to make sure the savings is immediate. We can't make cuts that we find would take six months for savings to start," she said.

McMahon, who is a strong opponent of the income tax increases in this year's budget, said he fully expects labor groups and the Working Families Party to push for another tax increase rather than making cuts in the budget. "I would bet on it," he said.

Krueger and Sampson, who both supported the income tax increase, have publically stated they do not support closing the budget gap with increased taxes or fees.

In the end, some say Paterson might desperately want to take the lead on the budget. He may very well want to make tough cuts and take a stand for fiscal responsibility, but with an approval rating of 17 percent the hard reality may just be that Paterson doesn't have the political leverage to push the legislature to accept any cuts. His only hope may be to negotiate with the legislature and hope its members understand the gravity of New York's financial situation.

"The more Paterson says we can't wait while he does not offer a plan the more otherworldly this gets," said McMahon.