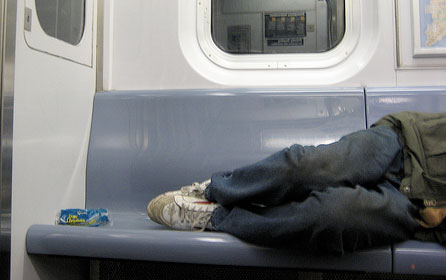 The Mayor’s Management Report for fiscal year 2009 is a 236-page jumble of data that tells us a lot about social conditions and agency activities in the city. But an analysis of data on two priority departments -â€“ education and homeless services â€“- shows how limited the report is in determining actual management performance. In fact, contrary to the requirement set out in the City Charter, the Mayor's Management Report released Sept. 29 -- 12 days after the due date set out in the charter -- says very little about management.

But with both agencies the design of the report makes it difficult, if not impossible, to determine success or failure. Indicators are changed constantly; few trace performance over long periods of time. Some numbers are self-serving; other more useful indicators are simply ignored.

What little management review the report provides is either cryptic or opaque. The result is not so much a management report as a fact book. The fact that the book is designed, produced and advertised by those whose accountability the Mayor's Management Report is meant to document limits its readability and credibility.

The 2009 management report is packed with good news about a school system now under direct mayoral control. In fact, the section of the mayoral press release that reviews the eight years of the Bloomberg administration said that 27 of 27 public education indicators show a "positive or stable trend." In human services, by way of contrast, it's 22 of 34.

The 2009 Mayor's Management Report adds a new indicator that uses state, not city, data. Under this method, the graduation rate rose from 46.5 percent in school year 2004-05 (no data available able for 2000-01) to 60.7 percent in 2007-08. The difference stems from the fact that the state doesn’t count graduation-equivalent diplomas or special education diplomas in measuring graduation rates.

A more amazing highlight is that the number of students in grades three through eight meeting or exceeding standards in English Language Arts rose from 39.0 percent in the 2000-01 school year to 68.8 percent in 2008-09; in math the rate rose from 34.0 to 81.8 percent in the same period.

The press greeted this year's report cards more as a joke than a triumph: A Times reporter commented, "Suddenly, New York City looks like Lake Wobegon, where all the children are above average." This may explain why neither the mayor’s Mayor's Management Report press release nor the report itself includes those new school grades.

The school budget for the 2008-09 school year was $17.7 billion according to the report, over 50 percent more than in 2000-01. The reduction in class size, however, is quite modest as measured by the nine indicators in the press release show changes in class size in grades kindergarten through eight.

This mix of modest-to-amazing progress is tempered by a number of critics who have questioned the department’s test results. More than a year ago, a team of New York Daily News reporters raised serious questions about the sudden explosion in New York State reading and math scores, including those from New York City scores. Robert Tobias, an NYU professor and a former top test official for the city Board of Education, suggested, "The test is probably easier than in the past."

More recently, the Times in September reported that seventh graders who correctly answered only 44 percent of math questions got passing grades. On some tests, a student could randomly guess and still stand a good chance of receiving a passing grade.

NYU research professor Diane Ravitch has pointed out that Mayor Michael Bloomberg's claims for dramatic improvements in student achievement have not been verified by any independent source. She noted that on the federal National Assessment of Educational Progress, New York City "showed almost no academic improvement between 2003, when the mayor’s reforms were introduced, and 2007."

The only indicators in the Mayor's Management Report with any direct relevance to management in the Department of Education are the numbers of years of teaching and principal experience. The percent of teachers with at least five years experience has remained unchanged at 64.4 percent over the past four years, and the percent of principals with more than three years experience in 2009 (53.5 percent) is almost exactly (53.7 percent) what it was three years ago.

The report makes no effort to examine the effect of major mayoral initiatives in education, including: charter schools, small high schools and the centralization of administration. Nor is there any mention of the more than $3 billion of contracts that the department manages -- in spite of recent criticisms by the state and city comptrollers.

The Bloomberg administration in 2002 moved contract information from the Mayor's Management Report into an annual report issued by the Mayor's Office of Contract Services that has extensive data but even less exposition than the management report.

It is equally hard to get useful management information about the Department of Homeless Services in the Mayor's Management Report. Unlike the education department, which provides mostly direct services, homeless services is essentially a contract agency. More than 77 percent of the agency’s $865 million budget in 2009 went to189 privately run shelters under contract with the city. The city itself runs 11 more. The almost complete privatization of homeless services has been one of the major changes in city government over the past 15 years.

But the management report indicators do not include any management information about that new city/private relationship. The eighth-year review in the mayor’s press release on the management report acknowledges many more families are in the shelter system today than eight years ago: The average number of families in shelters per day rose from 5,563 in 2001 to 9,244 in 2009, almost a two thirds increase.

The number of adults in shelters, on average per day, has dropped slightly, from 7,187 in 2001 to 6,526, or by 9 percent. However, in the mayor’s second term, the number of single adults, adult families, and families with children entering the shelter services system have all increased. Some 18,480 single adults entered the system in 2009 (up by 7 percent), along with 1,278 adult families (up by 27 percent), and 12,959 families with children (up 61 percent).

Because of shifts in indicators (breaking "families" into two categories -- for instance, those with children and those without) over the past years, it is hard to find many more eight-year indicators. One indicator that was dropped during those years is the number of children in the shelter system.

The Coalition for the Homeless provides that figure and other useful social indicators missing in the management report. In November 2008 15,884 children were living in shelters -- 35 percent more than the 11,732 children sheltered in April 2006, the lowest number in any one month over the past eight years. Altogether, 36,600 men, women, and children were in shelters last November.

The coalition points out that 109,000 different homeless adults and children turned to the city’s shelter system in the previous year. It also notes that thousands more live in public places.

The management report minimizes the problem and says that the number living in public spaces has actually dropped from 4,395 in 2005 to 2,328 in 2009, or nearly by a half. The unanticipated increase in families and adults coming into the shelter system has forced the department to dramatically increase its placements in permanent housing. And the numbers are impressive. The number of families moved to permanent housing increased by from 3,349 families in 2001 to 9,244 in 2009. The number of adult placements rose from 5,532 to 9,107.

In the face of the increasing number of families entering the shelter system, the Department of Homeless Services has focused on preventive services. Three indicators look at the percent of single adults and families with and without children receiving such services who then do not enter the shelter system. The success rates in 2009 in each category are very high: 95.8 percent, 98.6 percent, and 91.3 percent respectively. However, the report does not provide either the total number of people served or any sense of who managed the services and at what cost.

In fact, neither the education nor homeless services section tries to make any link between expenditures and results. The Coalition for the Homeless says that sheltering a homeless family costs $36,000 a year, and a homeless individual, $23,000. Some such figures in the management report might help develop new policy. For instance, the coalition suggests that the alternative of rental assistance with support services for a family costs as little as $8,900 per year.

The fact book that the Bloomberg administration has created over seven years is full of information about social conditions and bureaucratic actions. But the Mayor's Management Report is meant to be more than that -- a measure of mayoral accountability. On that score, the current version no longer serves that purpose. That could explain its lack of coverage in the mainstream press.

The next charter revision commission (or the City Council) should find a more independent, comprehensive accountability mechanism that would complement or replace the Mayor's Management Report.