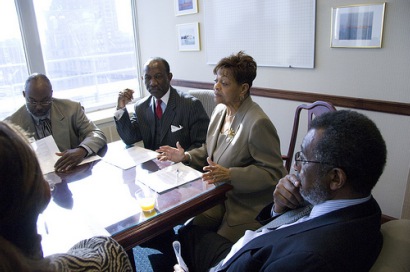 NEW YORK — Londel Davis' Harlem-based company has contracts to service fire extinguishers with some of the city's largest agencies, including the Department of Education.

But in spite of his success, Davis, who is black, says it's far more common for him and other minority business owners to get rejected when they bid for city contracts. And he says he doesn't really know why that is.

"It might have been our bid was too low," he said. "We might not have had a piece of a document."

The City Council approved a bill yesterday that would revise Local Law 129, passed in 2005, which was supposed to increase opportunities for minority and women-owned businesses to get contracts from the city. Among other enhancements, the new bill would add a greater level of accountability and eliminate a $1 million contract cap.

Local Law 129 had set targets for city agencies to contract minority and women-owned businesses for certain sectors, including construction, architectural and engineering, as well as services and goods.

But the law had been criticized for failing to do its job because of its lack of enforcement and effectiveness. There were also complaints that, because of the $1 million cap, only 15 percent of the billions of dollars worth of city contracts had been subject to the law.

An analysis of the program under Local Law 129 by the mayor's Office of Contract Services this year found that "disparities still exist" between the number of minority and women-owned business enterprises and "the extent to which they are performing city contracting work."

Minority and women-owned business enterprises had about 3.1 percent of the share of eligible city contracts for most of 2012, according to data on the city Comptroller-run site M/WBE Report Card NYC.

In announcing yesterday that the Council would pass Intro 911, the update to Local Law 129, Speaker Christine Quinn said in remarks to the press: "It really became clear, crystal clear, that we needed to do more to ensure that [minority and women-owned business enterprises] got their fair share in the city procurement process."

Michael Bloomberg praised the decision by the Council, strongly suggesting he would sign it into law. "These measures are an important part of diversifying our economy," he said.

Not everyone has been enthusiastic about Intro 911. Some Hispanic business groups were disappointed that it lowers procurement goals for Hispanic-owned construction companies from 9 percent to 4 percent, the Village Voice has reported.

"We're very disappointed with this decision," Frank Garcia, chairman of the New York State Coalition of Hispanic Chambers of Commerce, told the Voice. "We thought that they would at least negotiate with us to give us a higher percentage."

City officials have emphasized that the goals are aspirational, not a quota. The participation goal for blacks in the construction sector was also decreased from 12.63 percent to 8 percent in the new bill.

Besides updating the participation goals, Intro 911 makes a number of revisions and enhancements to Local Law 129, among them the elimination of the $1 million cap and a provision establishing an accountability program, M/WBEStat, modeled loosely after the New York Police Department's method of analyzing crime statistics.

M/WBEStat would require agencies to report their progress toward participation goals to a high-ranking city official.

Davis, who started American Fire Control in 2007 and says his company services 15,000 to 25,000 extinguishers a week, said he was keenly interested in the accountability measure that has been added to the local law through Intro 911 because it adds a level of enforcement that didn't exist before.

He said this could help make the process of bidding for city contracts more fair. "We would all like equal opportunity like everyone else," he said.