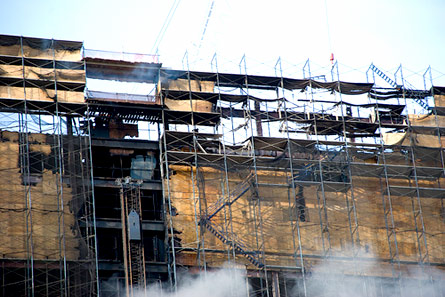 August 18 was a tragic reminder of the dangers associated with rebuilding our community six years after September 11, 2001. Two firefighters, Robert Beddia and Joe Graffagnino, needlessly died putting out a fire at 130 Liberty Street at a building that had long sparked controversy.

The History of a Troubled Site

When Community Board 1 urged the adoption of an emergency and community notification plan in October 2005, the Lower Manhattan Development Corporation told the board that residents should "call 911."

Unsatisfied with this clearly problematic answer, Chairperson Julie Menin wrote to then President Stefan Pryor of the Lower Manhattan Development Corporation regarding the need to expeditiously implement a codified community notification plan with phone trees. We proposed a myriad of ideas, including email blasts, building captains and two-way hand-held radios. Unfortunately, the letter received no response.

On April 18, 2006, Community Board 1 unanimously passed a resolution expressing our serious concerns about the safety record of Bovis Lend Lease’s subcontractor, John Galt Corporation. Specifically, the board questioned the poor safety record of John Galt and one of its affiliates.

In addition, Community Board 1 had pulled out of a Lower Manhattan Development Corporation sponsored “open house” on October 24, 2005 when the previous corporation's administration under Governor George Pataki would not let the community ask questions publicly.

The Actions Since The Fire

In light of the most recent tragedy at Ground Zero, we once again met with state and local leaders to discuss the need for a notification and an emergency plan.

Three days following the fire, Community Board 1 members met with Assembly Speaker Sheldon Silver, the Lower Manhattan Development Corporation, the Lower Manhattan Construction Command Center and other elected officials. At that meeting, we discussed the need for a notification and emergency plan to be in place and our concern with Bovis Lend Lease and their subcontractor John Galt, as we had done numerous times in the past.

More than 100 downtown community members attended, serving as a true testament to the dedication and concern downtown residents have about our community. The meeting not only gave the downtown community an opportunity to hear directly from the agencies involved but also resulted in many productive initial steps.

First, we urged that John Galt [which has since been fired] be removed from the job, given the numerous Occupational Safety Health Administration violations and buildings department complaints against it. (Although Bovis Lend Lease and John Galt were specifically invited, they failed to appear much to the consternation of the community). [Bovis has since agreed to meet with Community Board 1 and other elected officials.]

Second, at this meeting Edward Skyler, the deputy mayor for administration, and Lower Manhattan Development Corporation Chairman Avi Schick committed to meet with Community Board 1 immediately to devise a community notification plan.

Third, we voiced our strong concerns that the Deutsche Bank building be immediately resealed without any delay.

Fourth, fire inspection teams will be evaluating the fire-fighting systems inside two other buildings that will be shortly decontaminated and deconstructed/rehabilitated -- Fiterman Hall at the Borough of Manhattan Community College and 130 Cedar Street, respectively.

Where We Go From Here

Although we all want the 130 Liberty Street building to be taken down, we have requested that it be done in a manner that is safe for both the workers, first responders and the people who live and work nearby. The next steps include:

1. Secure the fire-damaged, World Trade Center-contaminated building so that debris will not fall out and injure someone. [Two firefighters were injuredlast Thursday at the site when a John Galt worker lost control of a forklift and it toppled from the building].

2. Determine why the fire occurred and put in place a plan so that it will never happen again. Such a plan should mandate that the water main that supplies water to the building and various floors would be functioning during the remainder of this difficult project.

3. Develop a contingency plan for various emergencies â€“ including fighting a fire â€“ and make sure that as work proceeds in this building the response team is given the floor plans as they change.

4. Create an effective communication plan from city agencies to neighborhood residents and businesses â€“ consider text messaging, a phone tree, reverse 911, televised announcements and e-mail blasts in real time. Such communications should include whether residents/workers should evacuate or stay in their homes or at work, whether they need emergency breathing apparatus and if a building is in danger of collapse.

5. Determine whether the fire re-contaminated the previously decontaminated area, and if so, require such area to be re-cleaned and re-inspected prior to demolition.

6. Review the impact of water damage from putting out the fire so that mold will not be an issue in the remaining hot days of summer.

7. Hire a responsible subcontractor to replace John Galt -- one that, as required by the Procurement Policy Board Rules of the City of New York, is capable "in all respects to perform the contract requirements fully" and has "the business integrity to justify the award of public tax dollars."

8. Require vigilant enforcement of city building, construction, safety, and fire codes and regulations --including no smoking on the construction site.

9. Test residential and work areas in the immediate area and, if necessary, clean them.

It is imperative to take the lessons learned from the 130 Liberty Street tragedy and make sure that they are implemented going forward at that building and at Fiterman Hall and 130 Cedar Street as well.

Unfortunately, our community has already been the target of two terrorist attacks, and if any lesson has been learned, it is that we must prevent a senseless tragedy like this from ever happening again and ensure that the community is protected.

Julie Menin and Catherine McVay Hughes are chairperson and vice-chair of Community Board 1, which includes Ground Zero and the surrounding area.