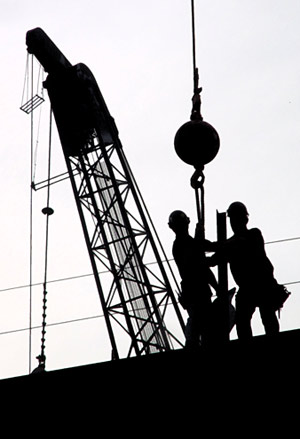 Not to long ago it seemed immigration would play a key role in this year's presidential campaign. But the hot-button issue has faded into the background since the economy emerged to trump everything else.

The economy also dominates news in much of the immigrant press as it does in mainstream media. Immigrants will feel the pain spreading throughout society, Larry Tung reports, but the suffering will fall particularly hard on some people who are not citizens or who work in construction or have low-levels jobs in service industries.

This month's Citizen looks at the recession's effects on various immigrant communities and workers. We also present some last-minute stories on the presidential campaign, as well as articles on a court ruling on restaurant delivery workers, Hindu-Muslim marriages, the fate of an East Harlem market and more from the Spanish, Chinese, Russian and Polish language press, via our partner Voices that Must Be Heard.

Polish Workers Fear Job Losses Super Express
The troubled economy has taken a heavy toll on construction jobs, creating less work for many Polish New Yorkers. There are fewer jobs in the building trades, and those that remain offer fewer hours or lower pay.

Campaign Offers Little Discussion of Immigration Caribbean Life
Because the third presidential debate focused on domestic issues and took place on Long Island, where immigration has been a controversial topic, many observers thought the candidates would finally talk about immigration. They did not. Advocates discuss why.

Churches Walk a Fine Line on the Election Carib News
Many ministers with West Indian congregations support Barack Obama for president -- but they can't come out and say so.

Court Decision on Pay Alarms Restaurant Owners World Journal
Chinese restaurant owners reacted with shock and dismay to a court's decision that Manhattan's Saigon Grill restaurant chain must pay 36 Chinese deliverymen a total of $4.6 million in back wages and damages.

What Union Membership Means to New York Latinos El Diario/La Prensa
Some 300,000 Latinos in New York belong to labor unions. A study investigates what unions mean for these workers.

Some in Greenpoint Oppose Bike Lane Nowy Dziennik/Polish Daily News
Thousands of cyclists in Brooklyn are cheering the prospect of a 1.5 mile greenway that would go from Greenpoint to Sunset Park, but some community residents say the area already has enough bike lanes.

Bangladeshi Community Sees Rise in Hindu-Muslim Marriages Weekly Thikana
Interfaith marriages were once a rarity in the Bangladeshi community, but in this country, where sexes and religions mix freely, they have become increasingly common.