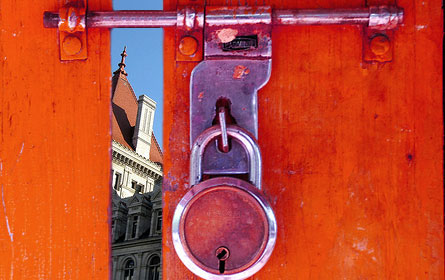 Last week, at Gov. David Paterson's order, the state paid legislators thousands of dollars to hold a special session to cut the state budget. For two days rank and file members griped about wanting to return to their districts, while leaders negotiated without reaching a deal. On Tuesday, they passed two bills on unrelated issues, packed up and went home.

Paterson, however, still held out hope. He told a small group of reporters that after months of talk about cutting the budget, negotiations had finally gotten serious. Legislators have promised to return today (Nov. 16) to finally pass a deficit reduction plan. What shape that plan might take, though, remains very much in doubt.

Five Men on the Phone

With most members back home, negotiations in Albany continued behind closed doors.

On Thursday, during a call open to the press, Paterson and legislative leaders gave the public a peek behind the curtain, and what they saw wasn't pretty.

"We're talking to each of you separately," Paterson said to the leaders. "When we were meeting together, everybody was kind of hesitant to make the first cut, thinking they’d get blamed for it," he said. The point that leaders can't manage to work together was driven home as Senate Minority Leader Dean Skelos laced into Assembly Speaker Sheldon Silver.

"What cuts in spending does he support?" Skelos demanded. "Again, my question is, what real cuts are being supported by the speaker? And frankly we have the right to know this as we negotiate."

Silver was evasive. "Senator, I don't believe that the secretary of state swore you in as a district attorney or a prosecutor," he responded before Paterson broke up the exchange.

Paterson defended holding such compartmentalized negotiating sessions on the grounds that special interest groups' opposition to proposed cuts has scared legislative leaders from taking a public stand. He insisted that a deal to cut the deficit is about "three quarters" complete. He also admitted that he was becoming less committed to specific cuts, including those he proposed earlier this year, than to somehow reducing the state's huge gap.

"I am less and less ideological about deficit reduction," Paterson said. "We just have to do it."

So, for example, Paterson indicated his office was reviewing the possibility of refinancing the state's tobacco bonds to generate revenues. Senate Conference Leader John Sampson had pushed the idea weeks earlier, only to have Paterson tell him the idea was dead on arrival.

The state sold tobacco bonds to receive cash for a 1998 lawsuit with cigarette companies. The Senate has proposedrefinancing the bonds since tobacco bonds have been a popular form of investment this year. Doing so, they say, could produce up to $500 million. Paterson had earlier questioned that estimate, saying he thought it might only produce $25 million. Other states such as Wisconsin have refinanced their tobacco bonds to raise cash.

Where Do They Stand?

Exactly which leader stands for what cuts remains unclear.

Assemblyman Jose Peralta of Queens said Paterson's plan will disproportionally affect his predominantly low-income district. "The package the governor put out is unacceptable to my district because there will be huge cuts in service, especially to health care and education," he said. "I am really against the governor's version; we need to find revenue enhancers." He did not specifically any measures he had in mind.

But Peralta said he and his Assembly colleagues are not as diametrically opposed to the governor's plan as the Senate Democrats appear to be. "I think the Senate does the opposite of what the governor is doing, perhaps for political reasons, but at the end of the day we will all sit down and realize we have a problem. We will run out of cash and we are not crying wolf. Even the most progressive of us realize that services will be cut," Peralta said.

Sen. Bill Perkins agreed. "No one says this is all nonsense. The legislature just has a different perspective than the governor. Our system of government is not designed for us to go in front of the governor and just sign off."

Although Perkins expressed fears about what Paterson's cuts might do to services in his Harlem district, he gave Paterson credit for the way he has handled the deficit problem and said he might still be in control of the situation.

"David has been here a long time, he was a legislator for years, so he knows the legislature better than most governors. From our point of view he knows us better than we know ourselves," Perkins said.

So if legislators get their way and see the harshest cuts removed from the budget, how will the state patch its deficit hole? Senate Democrats have proposed a number of one-time ways to raise cash. They would raise $30 million by reducing the state's reliance on contractors, $500 million by refinancing tobacco bonds, and sweep cash from different state authorities into the state budget. Some of the proposed sweeps include $200 million from the Port Authority, $160 million from the New York State Health Insurance Plan and $40 million from the Workers Compensation disability fund.

They have also proposed increasing the Video Lottery Terminal parlor hours, a move they estimate will raise $39 million.

Senate leaders have also indicated that they agree with millions of dollars in cuts to state agencies that Paterson has proposed.

Just as this year's budget was negotiated in private and served up as a package with other legislation (such as reform of the Rockefeller drug laws), this deficit reduction package will likely will be negotiated and delivered in a similar manner.

"As a taxpayer I want them to fix the budget however they do it," said Blair Horner of the New York Public Interest Research Group. But he said if he had a "magic wand," the governor would have put his proposal forward earlier in the year to allow the legislature to counter with formal proposals and then work out the differences in conference committees. Instead, now the governor and legislature have little time to prevent the state from running out of cash, and, despite some public hearings, generally are negotiating in secret.

With the budget cutting process happening in closed-door negotiations, other legislative issues, including same-sex marriage and perhaps authority reform, may be getting mixed up in the deal.

Paterson demanded that the Senate take up a vote on legalizing same-sex marriage during the special session last week. Senate Democrats needed some Republican votes to pass the measure, but Republicans who had indicated they might lend their support were leery about voting for gay marriage without having completed a budget deal.

There has been talk around the capitol that Republican members are looking to trade votes on gay marriage for gains in budget negotiations.

Liz Benjamin reported on Friday that getting Republican votes for gay marriage "depends on what a [budget] deal looks like." Republicans are said to be looking for real cuts to the budget rather than just revenue enhancers. So the future of gay marriage in New York State may hinge on exactly how Assembly and Senate Democrats go about cutting the budget.

"It is much better to deal with one issue at a time," said Horner, "But it's been a historical fact that issues get wrapped up in one big deal. We call it the 'big ugly.'"

Republicans and fiscally conservative groups like the Empire Center for New York State Policy insist that real cuts need to be made to ensure that the state's finances do not collapse. Next year legislators will face a deficit estimated to be around $7 billion. It is also is an election year so legislators will likely be even more reluctant to make real cuts then.

A number of Democratic legislators say they believe the economy is on the way up and the state will soon find itself in better financial waters. "The Dow is indicative of our future, and the Dow is improving," Peralta said.

He said that he has faith that Silver has a firm grasp of the state's economic situation. "Shelly's staff was months ahead warning us about the economy. So you have to give it to him. I have faith that Shelly knows how to handle this," Peralta said.

Representatives from Paterson's office and the comptroller's office say that it is too soon to rely on an economic upturn to save the state.

With little hope of Wall Street bouncing back to the rescue, Paterson has continued to insist that he sees no way to fill the state's $3.2 billion budget gap without serious cuts to education and health care. "I don't see how health care and education cuts could not be part of the plan, because they're 55 percent of the budget," Paterson said.

Paterson has called for special session for today and Tuesday. Legislators say they hope there will be a deal but will not make any promises.

"If there is a deal, will I vote for it?" asked Peralta rhetorically. "It depends on what's in it."