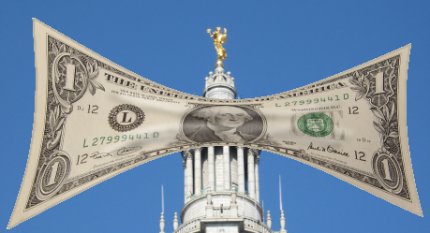 While the exact predictions vary, almost everyone agrees the palmy days of budget surpluses and bulging city coffers are coming to an end. Facing declining revenues, Mayor Michael Bloomberg has said the city needs to trim $1.5 billion from its budget over the next two years. As part of this, he instituted mid-year cuts in the city schools, prompting protests from some students and parents.

The news from Albany could be even grimmer. With 20 percent of the state's tax revenues coming from Wall Street, cutbacks seem inevitable. Already Governor Eliot Spitzer has called for scaling back increases in state aid to city schools. He has proposed some new spending initiatives, but many experts say his budget projections are far too rosy.

It is against this backdrop that the city's 2009 municipal elections are beginning to take shape. Five people - three City Council members, a member of the State Assembly and a borough president - have already announced their intention to run for city comptroller. Whoever wins this election - and succeeds William Thompson, who is term limited (and almost certain to run for mayor) will pay a key role in plotting New York's fiscal future. The city's chief financial officer, the comptroller invests its employee pensions funds, audits city agencies and makes recommendations on city programs and spending.

Gotham Gazette asked the five declared candidates for comptroller to offer their views on what policies New York City should adapt to confront the new fiscal reality.

(Note: Other politicians are considered likely to enter the race. We limited ourselves, however, only to official announced candidates.)