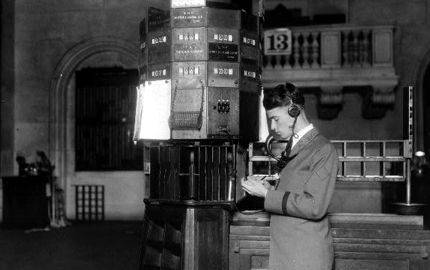 A telephone operator at the New York Stock Exchange, 1928. from the Library of Congress

It makes sense. The news that insurance losses from sub-prime mortgages exceed the losses stemming from Hurricane Katrina gives us an appropriate name for the mess we find ourselves in: an economic Katrina. We always believed that our government would protect us from such a disaster, but boy, were we wrong.

Heeding the call of the current Business Week, "Waking up to the Recession," let's rub the sleep out of our eyes and count the ways today's economy is not the one we thought we had. For this task, the economist in us will need all 10 of our fingers.

George Bush's friend "Brownie" (former Federal Emergency Management Agency chief Michael Brown) must have been in charge of the Federal Reserve. Under chairman Alan Greenspan, our nation's "non-political" guardian of the financial system stood by while banks and other lenders jettisoned any sense of prudence and "irrational exuberance" overtook the housing market. The Federal Reserve acted as though it believed that deregulation meant no regulation. Its officials watched in awe while Wall Street bankers developed ever-exotic financial instruments - ABSs, CDOs, CLOs, CDSs and who knows what else - allowing financiers to trade risks back and forth for more fees. These investments built a sub-prime pyramid on a foundation of ever-rising housing prices.

Other "innovative" forms of money-changing proliferated as long as the pyramid went on pyramiding and banks were willing to lend to super-leveraged hedge fund speculators. Whatever we might have expected of "regulators" like the Bush administration's Securities and Exchange Commission, we had thought that the Federal Reserve itself would do financial fire prevention and not just financial fire fighting.

New Yorkers used to cheer every year that holiday bonuses on Wall Street broke the old record. The conventional wisdom had it that more spending by bankers would slosh around the local economy, and city and state treasuries would be flush with tax receipts to pay for schools, the subway and public hospitals. Now, though, we have learned that big bonus payouts can mean the economy is about to go off a cliff because bankers and brokers do not get those bonuses for helping the American economy create good jobs, new companies or new products. Instead, they rake in those bonuses for finding new ways to generate fees and feed unsustainable speculation.

3. The "You're On Your Own" economy does not apply to giant banks.

In his book, "All Together Now, Common Sense for a Fair Economy," economist Jared Bernstein described how in the YOYO economy, you're on your own to sink or swim. When you fall down or get knocked down, don't expect government to help you get back on your feet. This left millions of middle class workers who lost manufacturing jobs, their health insurance and pensions to fend for themselves. But now we see that if a giant bank (think Bear Stearns) falls on hard times (after its ultra-high stake bets went bad), the government rolls out the plushest safety net you could imagine. It spares no expense -- and does not even ask the bankers who made those bad wagers to return their multi-million dollar emoluments.

4. Credit card debt is no substitute for broad-based wage gains.

Consumer spending drives the U.S. economy, accounting for over two thirds of Gross Domestic Product (the national economic yardstick). Used to be, the economy grew and workers' wages grew, allowing families to put food on the table and a roof over their heads, and still have some money left over to save for vacation, college or retirement. For most workers, wages are no higher today after adjusting for inflation than they were in 2000. To maintain consumption, American families have resorted to trillions of dollars of home equity debt and credit card borrowing. It didn't feel like that would be sustainable for long, and it wasn't.

A low unemployment rate once meant that most people had jobs, and if you lost yours, you could find another within a reasonable period of time. That is no longer the case. Now, it means that many people have simply given up. In New York State, for example, enough adult men, particularly black men, dropped out of the labor force in this decade to account for about a percentage point decline in the unemployment rate. They dropped out because the prospects of getting a decent job were almost nil. Also, more of those officially unemployed have been out of work for longer than six months than at the start of previous recessions.

6. Sub-prime lending did not give us record home ownership.

In recent years, economic Panglossians touted what they thought was record home ownership, citing it as proof that a rising tide lifts all boats. Instead, we have had a Tsunami of sub-prime lending. It has created a situation where the equity that American homeowners have in their houses is the lowest since records began being kept in the 1940s, With tens of thousands of mortgage foreclosures already underway or on the way, let's check the homeownership rate in New York City in two or three years.

7. Government spending, it turns out, is pretty useful.

Under the last four presidents, "government spending" usually has been treated like some kind of Evil Empire to oppose or at least rail against. Even the one Democrat among them, Bill Clinton, abandoned his campaign's "Invest in People" agenda that called for expanding infrastructure and other "putting people first" government spending to concentrate on reducing the deficit.

So what happens when the economy suddenly turns south? Politicians embrace a big boost in federal spending to cushion the downturn. This year probably will see another round or two of federal stimulus spending because there's no quick economic rebound in sight. It seems we need government spending after all. And if we had a more thoughtful system of government-funded investment in our physical and social infrastructure , complete with safety nets for people and not just giant banks, our economy wouldn't be so vulnerable to a Wall Street meltdown in the first place.

8: A college education might not get you a good job after all.

"Get a college education, get ahead." That's so "20th century." Now, we know that for most kids who are not from wealthy families, the only thing a college education definitely will get you is a mountain of student loan debt. The global economy is sending millions of white-collar jobs overseas. The Labor Department projects that, even 10 years from now, two thirds of the jobs in our economy will not require a four-year college degree. Since 2002, the real median wage for New York workers with a bachelor's degree or higher fell by 6 percent. Getting a college education is still a good idea, but somebody needs to think about how we get more good jobs in this economy. The challenge is how can policy makers use a combination of carrots and sticks to get businesses to create more demanding and better paying jobs.

9. Having succeeded in keeping wages down, the White House is doing all it can to push prices up.

The Bush administration would not let the 200,000 new employees at the post-9/11 Transportation Security Agency join a union, and it tried to scuttle even minimal labor standards in the Gulf Coast reconstruction effort.

At the same time, though, the administration has made a number of moves sending prices, particularly energy prices, ever higher. It turned over federal energy policy to the oil companies and blocked better fuel efficiency standards. The Iraq war has helped keep the oil-rich Mideast unsettled and oil supplies down, both ingredients for $110 a barrel oil. Its efforts to promote biofuels, like ethanol, have helped push grain prices to record levels. Thanks to this, we have much higher energy and food prices to go along with the recession.

Many Americans have wondered whether importing a lot more than we export really is a good thing if it means that American workers lose their jobs and, as a result, communities across the country lose their people. Nonetheless, as major leaders in both political parties touted the benefits of "free trade," many other Americans thought this was the necessary price to pay for a global economy.

Now more people are beginning to question the free trade faith. Not only did the U.S. lose 3 million manufacturing jobs from 1998 to 2003, but we didn't get any of them back in the recovery from 2003 to 2007 (in fact, we lost almost another million during that "recovery" period). That never happened before.

People see that the sky-high prices they pay at the gas station are going to finance the world's tallest buildings and world-class museums in tiny undemocratic, oil-exporting Mideast kingdoms. People worry about the safety of toys they buy for their kids, the food they feed their pets and the medicine they take themselves. At the same time, the country spends so much more on things we import than the rest of the world spends on U.S. exports that mountains of U.S. dollars are piling up in China and oil-exporting countries. So when Wall Street banks needed fresh infusions of capital to stay afloat, the only places to which they could turn was countries from which we buy our imported oil and manufactured goods. It's no wonder more and more Americans are asking to see (not to mention share in) the benefits from the global economy.

The Wall Street recession (a.k.a. this economic Katrina) may really be a "teaching moment," as they say. It does seem like the economy we thought we had doesn't exist, or at least doesn't exist anymore. At least we should know that when bonuses start to shoot up again on Wall Street, it's time to start worrying.

By the way, it's unofficially official now: The economy is in recession. Not only do 71 percent of the economic forecasters in the Wall Street Journal's survey say that, but economist Martin Feldstein declared it a recession last week. He is one of the handful of members (and the most publicly prominent) of the group at the non-governmental National Bureau of Economic Research that officially makes that call, when they get around to it.