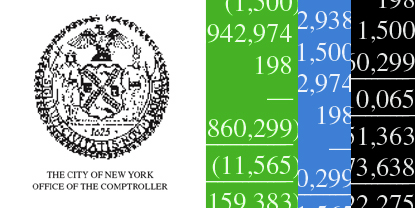 One of the first official responses to the New York City Council's use of phantom non-profit organizations in its budget process came from City Comptroller Bill Thompson. He sent a letter to Council Speaker Christine Quinn outlining a number of actions he will take. They included his own review of council discretionary funds and an independent audit of the council's discretionary fund budget process.

His stated aim: to "strengthen budget transparency and help restore trust and confidence to our city's residents." Others might see a political motive at work as well since both Quinn and Thompson are likely candidates for mayor in 2009.

The dubious budget process at the council had apparently gone on for some years, so it is natural to wonder why the comptroller's office -- or other city offices, including the mayor's -- failed to notice the problems first reported in New York Post and under investigation by the U.S. attorney. The scandal, then, is not simply embarrassing for the council, but raises fundamental questions about how well fiscal and managerial oversight works in this city.

What the Comptroller Does

The city comptroller's audit role is clear enough and his work is readily accessible on his Web site. His office provides two key summaries of its auditing work, a city-charter mandated yearly report, which gives an overview of audits during the previous fiscal year, and a convenient listing of all audits during the most recent calendar year.

There were 69 audits in calendar 2007 alone, and they reveal any number of financial and managerial problems: in mayoral agencies, at the City Council and in for-profit and non-profit agencies that receive funding or other assistance from the city. But a review, over time, of some of the issues raised by these audits makes it clear that while the comptroller's findings may identify problems, they do not necessarily solve them.

The annual report, in particular, shows how many audited public and private agencies apparently minimize or simply ignore the audit findings. The New York Yankees, for instance, have made a habit over more than 10 years of ignoring audits and repeatedly trying (unsuccessfully, thanks to the audits) to shortchange the city on their rent payments.

Interestingly, a September 2007 comptroller audit of City Council budget procedures anticipated some of the problems now generating such a furor. The audit of the City Council's $14.3 million other-than-personal service (OTPS), or non-personnel, expenditures, for instance, shows that the council "did not comply with the City Charter, [contracting] rules, comptroller directives..., and its own purchasing procedures when making OTPS purchases."

The council paid approximately $1.67 million for printing, almost all of which went to only five vendors. The charter and contract rules state that any purchases over $5,000 must be competitively bid, but the council broke up its purchases from the five vendors into units under the $5,000 threshold to circumvent the bidding rules. In a separate finding, the speaker's own Central Office violated its rules as well as city contracting rules in not obtaining bids on its own expenditures.

The bulk of the comptroller's audits are focused mayoral agencies, through which most of the city's $60 billion budget flows. One of Thompson's most sweeping findings during his tenure covers several mayoral agencies (including parks, economic development, and Information Technology and Telecommunications) that manage franchise, concession, license, and lease agreements granted to private organizations. A recent summary audit notes, "Between January 1, 2002 [as Thompson took office] and June 30, 2006, the Audit Bureaus have completed 41 audits of [such] entities....These audits resulted in the assessment of [$23.8 million] in additional revenue due the city."

One of Thompson's first audits, released on May 30, 2002, went further back and reviewed the city's agreement with the New York Yankees, overseen by the parks department. During the four years, 1997 through 2000, the Yankees paid $18.8 million in rent to the city, but because they overstated rental credits (they can deduct these valid maintenance costs from the rent due the city) and underreported revenues, the Yankees owed the city $367,000.

Years later, the Yankees were still overstating their rent credits: over $1 million in 2002, and approximately $400,000 in each of calendar years 2004 and 2006. Invalid claims for credit for certain labor expenses showed up three times in 2007/2008 quarterly audits, even though they were specifically prohibited by the parks department in 1996. (From 1997 to 2000, the Yankees went so far as to not count as revenues -- although they already had the money -- "rain-check" tickets that were never redeemed when games were canceled and rescheduled.)

Overall, from fiscal years 2002 through 2007 the comptroller has conducted 578 audits and special reports that have generated a total of $211 million in actual and potential revenues and savings.

A review of recent audits of other mayoral agencies shows some of the difficulties in getting agency managers to resolve identified problems. The audits also serve as a useful complement to the mayor's own management reports, which tend to focus more on lists of performance indicators than discussions of management issues.

For instance, the comptroller issued a report last summer on the Department of Youth and Community Development's monitoring of one of the council's favorite programs, the Beacon Centers, an after-school program. The June 2007 audit found that the agency "is not adequately providing oversight and monitoring of Beacon Program contractors." The program represented 13.5 percent of the youth department's approximately $307 million operating budget.

The problems at the department included weaknesses in program record-keeping, including measuring outcomes. The audit notes that in 2003, the department contracted with an outside vendor to "design an agency-wide outcome measurement and tracking program," but the contractor failed to perform and the contract was canceled. At the end of the auditing period, in 2006, the agency still had not adopted a system.

Auditors and Department of Education

The auditors' work is not without drama. Tussles with Department of Education staff provide an unusually vivid example of how difficult auditing can be. For instance, a June 2007, 54-page

audit of special education management found that the department "is not monitoring, tracking or documenting the provision of [special education] services in an effective manner, as shown by documentation that is incomplete, inaccurate or lacking altogether."

In all audits, the subject has the opportunity to respond to the initial findings. Education officials objected both to the auditors' methodology and their findings. For their part, the auditors said, "We strongly disagree with DOE officials' arguments about our methodology, which appear to be self serving and correspondingly misleading."

Auditors' prose tends to be dry and technical, but the education department's response apparently touched a nerve, because the audit report goes on: "DOE's methodology is a transparent attempt to reinvent this audit in terms that obscure DOE's inability to monitor and track the provision of services through a reliable and consistent system of documentation."

It continues: "It appears that DOE paid no attention to the numerous and various items of correspondence detailing our requests and communicating our audit results. We can only conclude that our expectation of DOE's good faith at the outset of the audit was misplaced."

A more recent audit of the department's operations, a March 2008 follow-up audit of expenditures within its Regional Operations Center for Regions 6 and 7, was less contested, but illustrates that even a follow-up doesn't resolve problems. The basic issues involved following rules on contracting and purchasing. The follow-up audit looked at how well seven recommendations in a May 2005 audit were carried out in fiscal year 2006.

The new audit determined that three recommendations were implemented, but that the other four were only partially implemented. Moreover, the audit identified three new issues, including the centers not following rules on certification of purchase deliveries. Then, further complicating resolution of the original issues, the audit notes that the regional offices were dismantled in July 2007, and oversight was transferred to another office.

The follow-up audit acknowledged the department had implemented two of three recommendations but also noted that "major weaknesses still exist in DHS inventory-management process. Moreover, the inventory management procedures do not fully address Department of Investigation inventory standards." In addition, the audit found several new problems in the implementation of a software package purchased in 2002 to automate the computer inventory process, including a failure to use the system "to its fullest capacity."

How Better to Monitor the Money

The comptroller's audit function is invaluable in preserving the city's fiscal integrity, but even a short review of recent audits makes it clear that more oversight of the city's budget process is needed. A case could certainly be made for expanding the comptroller's auditing staff. But the mayor and council could also do much more.

A case could also be made for a charter review of the roles played by all the actors in the budget process. In a city with such a powerful mayor, the most important countervailing institution on fiscal integrity -- the comptroller -- has limited powers. The audits demonstrate that the comptroller works in a political as much as a fiscal world. Mayoral agencies and council offices are not always cooperative. Audit findings do not necessarily bring about change. Friction exists between the auditors and the agencies they review.

City Councilmember David Yassky, who hopes to replace the term-limited Thompson in 2010, in fact, said in an April 29

New York Post op-ed on the council funds scandal that he had "often felt there is an unspoken bargain between Mayor Bloomberg and the council: We get complete discretion to allocate some $100 million worth of 'earmarks'; in return, the rest of the mayor's $59 billion budget sails through without significant changes."