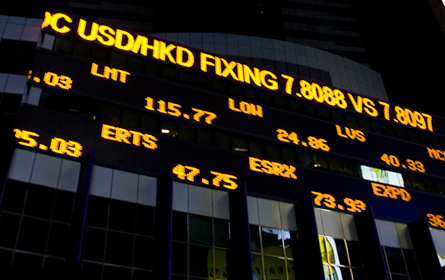 Photo (cc) Samuel Huron
Wall Street gains are a chief reason for the surprise increase in this year's tax revenues.

Mayor Michael Bloomberg’s November modification of the city’s four-year financial plan -- very quietly released without a mayoral press release on Nov. 16 -- and his concurrent directive to agency heads demanding big budget cuts offer many surprises. Some, like the modification’s acknowledgment of a sudden spurt in tax revenues and its list of federal economic stimulus monies pouring into the city, are even pleasant.

The mayor’s demand for $1.75 billion in budget cuts, however, is puzzling given the positive revenue news and a reduction in next year’s budget deficit. Another surprise is the modification’s retreat into budget opaqueness, contradicting the Bloomberg administration claims to transparency in governance. Lastly, perhaps less of a surprise, the modification’s does not offer any consideration of revenue options to meet next year’s $4.1 billion deficit.

The good news is that tax revenues in this fiscal year, less than five months after the budget's adoption in June, are nearly $800 million higher than anticipated, with the additional money coming equally from increases in personal and business income taxes. Even when offset by some lower revenues in projected real estate transactions ($74 million less) and unexpected bad news on the expense side of the budget -- someone misjudged the number of police officers who would retire, costing the city $120 million in anticipated savings -- the city suddenly has a mid-year $539 million surplus.

That surplus would seem to offer a good cushion for getting through this fiscal year without further cuts. But that’s not the plan at the mayor’s Office of Management and Budget. The modification takes the $539 million and, rather than using it as a reserve fund for the rest of this fiscal year, uses it as a prepayment of future debt service.

As the rather upbeat budget modification was being released, stories in the New York Post, the Daily News and Times reported that the mayor, in a memo to agency heads, had demanded further budget cuts, both for the current fiscal year and for fiscal 2011.The Post explained that the mayor is asking for $1.75 billion in agency cuts over the next 18 months. The $1.75 billion is in addition to a cumulative $3.2 billion in cuts that have been implemented in six earlier modifications.

The dailies all saw the demand for cuts as a blunt threat to the city workforce to make concessions or expect layoffs. The Post quoted Deputy Mayor Ed Skyler, "So whether it’s attrition or layoffs, some sort of personnel savings is going to be necessary in order to close the $5 billion deficit." (Skyler’s comment ignored the fact that the modification reduces the deficit for 2011 to $4.1 billion).

The Times reported a few days later that mayoral aides "have quietly encouraged such job cuts through an internal budget maneuver" that, as Doug Turetsky, of the Independent Budget Office put it, "incentivizes layoffs." It gives agencies more credit toward meeting their budget-cut targets if they lay off workers rather than, say, cutting supplies or contracts.

The mayor’s financial plan for 2011 had included a projected $557 million savings from future concessions by the city unions -- $357 million from having city workers pay 10 percent of their health insurance premium and $200 million from pension cutbacks. The state financial control board called this goal "a risk" in its July report on the adopted budget. Cuts in the city workforce could help make up for the mayor's likely failure to meet the goal.

The Times article noted that an administration that "prides itself on transparency" did not disclose this budget-cutting maneuver to the public or to the unions affected by it. What is more disturbing, however, is that the format of the modification itself is a major retreat from the level of disclosure in last year’s November modification. The 423-page conglomeration of facts includes not a single sentence about what any of it means.

Last November's modification had a 55-page summary that included a two-page overview, an economic update, material on financial-market volatility and a list of possible revenue options to meet future deficits. This November's modification, in spite of continuing distress about economic and fiscal conditions nationally and locally, and a $4.1 billion deficit for 2011, has none of these features.

Among the unanswered questions: Why such an increase in personal and business income taxes? One assumes it has something to do with record Wall Street profits and bonuses that many have predicted. But all we have here is the $402 million increase in personal income taxes and $407 million in business income taxes. How likely are these increases in tax revenues to continue this year and for the following three years of the financial plan?

The document does not offer any discussion of alternatives to the agency cuts proposed in the directive to the agencies. Last year, for instance, the November modification offered two options. One, across-the-board increases in the personal income tax rates, was dropped later in the year. The other, various minor sales tax increases, were abandoned in the face of the huge 0.5 percent hike in the city sales tax rate included in June’s adopted budget.

One useful -- if again, unexamined -- part of the November modification is a section on how the New York City government distributes the federal economic stimulus monies. The one big budget relief program is $850 million of new federal Medicaid funding, which replaces $850 million of city funding. In 2011, though, the Medicaid budget relief will drop to $295 million.

In addition, the federal plan puts $1.4 billion of new federal money into the fiscal 2010 expense budget. This money must be used for specific services defined by the federal government and so does not provide budget relief. The biggest part, $1.04 billion, goes to education, funding: 14,190 pedagogical positions that otherwise would need city and/or state money. Similar education funding, $1.03 billion, is set for fiscal 2011.

The city also gets $1.05 billion of capital funding for the Department of Education through school tax credit bonds in 2010 and an additional $995 million spread over three years, 2011 to 2013. Another $269 million of capital funding goes in 2010 to the departments of environmental protection and transportation for a variety of construction projects. Here, as in other sections, there is no analysis of the data, but presumably these billions of federal dollars have a significant impact on the city’s economy.

Earlier in November, the Daily News reported that Bloomberg, when asked if he would keep his promise not to raise taxes through the 2011 fiscal year, "more or less stuck to his campaign pledge ... but left himself some wiggle room by reiterating that a lot depends on how Albany decides to address its own budget woes." He also called the November modification a "minor mod," and said that he would offer more specifics about resolving the 2011 deficit in his January 2010 preliminary budget.

It seems odd that a modification that fails to examine a major (positive) shift in tax revenues at a time of deficit worries would be characterized as a "minor mod." The disconnect between the improved revenue news and demands for $1.75 billion in agency cuts over the next 18 months would appear to be worthy of discussion.

Perhaps the City Council can initiate such a debate, since it must approve the modification. Last year the council held several hearings on the modification because of controversy over property tax rate increases and homeowner rebates.

The other question the council might raise is why the mayor and Office of Management and Budget continue to make major changes in mid-year. As recently as the end of fiscal year 2008, the city had a surplus of $6.5 billion. Yet since January 2008 there have been seven modifications featuring mostly across-the-board agency cuts. Mid-year expense cuts, in particular, are disruptive to agencies â€“ to non-profit contract agencies as well as, if not more than, city agencies -- and individuals. Why can’t we have a budget that is stable for at least 12 months?