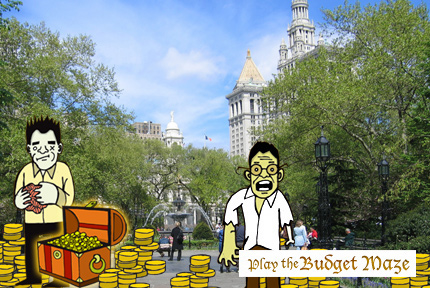 For two weeks, advocates and organizations have flocked to City Hall's steps to make their final pleas for funding. Instead of debating what new initiatives or programs to fund, some officials in this time of morose economic predictions are simply trying to hold on to what they have.

Tough times call for tough choices, said several city commissioners this week. Not every program or nonprofit will see the same funding in 2009 as in 2008 (If you want to learn how to get a hold of city funding, try our new game: The Budget Maze).

"This wasn't a good year for new needs funding," said Department of Parks and Recreation Commissioner Adrian Benepe at a budget hearing on Thursday. "For every dollar we spend, there is probably $5 you could spend on additional projects."

Some experts, though, say this pessimism remains unwarranted. Last week, the city's Independent Budget Office came out with an analysis of the mayor's executive budget, which was more upbeat than predictions elsewhere.

Its conclusion: The fiscal picture is brighter than expected, at least in the near future. While the office recognizes budget deficits loom for 2011 and 2012, the city could come out of the next two years relatively unscathed.

Given that analysis, some groups may argue for spending increases, especially in education, or immunity from cuts for particular departments. Others warn that the city should tread carefully, given Wall Street's volatility and the approaching threat of job losses.

Earlier this month, Mayor Michael Bloomberg revealed a plan for fiscal year 2009 that halted increases in city spending and cut about $1.3 billion. He called the economic forecasts "scary" and urged New Yorkers to pray for Wall Street's speedy recovery.

Now, the Independent Budget Office sees a slightly different economic forecast. Though its report predicts job losses at nearly 60,000 over the next year, it also sees $1.2 billion more in tax revenue than the administration's predictions for 2010 and a $4.6 billion budget surplus by this fiscal year's end.

This outlook may not be entirely optimistic when compared to recent years, but it is slightly more upbeat than the mayor's projections earlier this spring. "The mayor needs to be appropriately cautious, but with the benefit of a few more weeks of information, we put out projections that we think are as accurate as we can be," said Doug Turetsky of the Independent Budget Office.

The Independent Budget Office also came out with rosier revenue projections than the mayor's office following the release of the preliminary budget earlier this year. In its executive budget, the administration revised earlier predictions, increasing those revenue projections.

Caution is still key to some officials and watchdogs. As befits his reputation for "prudence," Bloomberg often releases gloomier than expected economic predictions that tend to brighten as the fiscal year moves forward. Whether a political tactic -- as some observers claim -- or an economic one, it can keep city spending tighter.

"The mayor's job is to be more conservative," said Councilmember David Weprin, who heads the Finance Committee. "The Office of Management and Budget is often very conservative with the hope that things get better. I don't think that's unusual."

The Process Moves On

Whether the administration's projection is overly pessimistic is not the only item up for debate. While the city's education funding has monopolized the spotlight (see related story) other areas of city funding have drawn the attention of some officials and advocates.

Weprin is particularly disappointed at the administration's failure to streamline funding for some City Council priorities, like education, the Administration for Children's Services, sanitation pickup in the outer boroughs and libraries. During good times, he added, the administration and the council had an agreement to end the budget dance -- a process where the mayor cuts funding with the expectation that the council will restore it. Now it seems that agreement is over.

"Frankly, it's a little disturbing, because these baseline items are not huge items in the overall budget," said Weprin. "We're back to the budget dance."

During a hearing on the Metropolitan Transportation Authority's capital budget, officials said the economic climate was forcing the authority to reevaluate its priorities, from subway station upgrades to major projects like the Second Avenue Subway, according to a press release from Councilmember John Liu.

Council members also have questioned the impact of program cuts, inlcuding those within the parks department, which is facing a decrease of $17.2 million from fiscal year 2008. That budget also did not restore the council's playground associates initiative, which funds full-time employees to oversee the city's playgrounds. Advocates and council members questioned whether this cut would threaten quality, maintenance and safety at the city's public parks.

"The city's parks, once the most celebrated and unprecedented public works program in the nation, have become dumping grounds and havens for drug use, prostitution, the homeless and criminal activity," said Geoffrey Croft, the president of NYC Park Advocates, in a prepared statement at Thursday's hearing. "Their maintenance and safety have plummeted under the weight of crippling budget cuts."

Despite recent cuts, said Benepe, the department's capital budget has doubled in the last five years.

The administration and the City Council have until the end of June to approve a budget agreement -- a proposal that now reaches toward $60 billion. That's 35 days and counting.