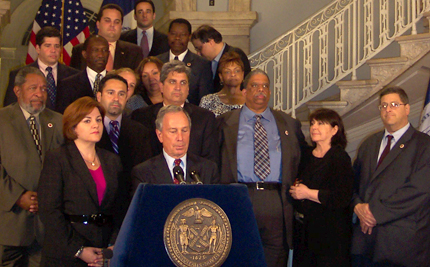 "We got screwed," said one advocate.

"We lost a lot of money," said another.

Those were not uncommon sentiments on the steps of City Hall Thursday night moments before Mayor Michael Bloomberg and Council Speaker Christine Quinn announced they had brokered a budget deal. As the sun descended four days before the beginning of the next fiscal year, some groups seemed to think their fiscal futures also were setting since the administration and City Council slashed funding for youth programs, senior centers and other services in an attempt to provide money for the city's classrooms.

"This is a question of setting priorities," said Bloomberg, who appeared particularly morose. "You can't say, 'All of the above.'"

Even though the City Council approved the budget late Sunday night, some advocates and council members continued to disagree with those priorities.

Many recognize the city faces tougher times. (Last week the Dow Jones reached historic lows for the month of June). But others argue a higher than expected surplus could have been stretched out to save community services. City officials, some advocates say, used overly pessimistic projections to cut programs prematurely. Others argue community services and programs should have been given priority over a $400 tax rebate and 7 percent property tax reduction.

An hour before midnight on Sunday -- the day before the June 30 deadline -- the City Council approved a $59.1 billion budget for fiscal year 2009 by a vote of 49 to 1 with Councilmember Charles Barron dissenting. The budget keeps spending virtually flat compared to fiscal year 2008.

It retains the $400 property tax rebate and 7 percent property tax reduction from the last year's budget. The council restored about $400 million to city agencies that the administration planned on cutting, officials said. Council members had initially hoped to restore approximately $700 million.

The city restored cuts to the Department of Education with $129 million from the City Council's discretionary funding. The budget added $18 million to the New York City Housing Authority -- about half the amount some had called for to stave off closing senior centers.

The budget also includes six-day library service, which was funded for the first time last year and put on the chopping block earlier during budget negotiations.

Overall spending increased 1.6 percent, which is below the rate of inflation. The City Council added 39 percent less to the final budget than it added in fiscal year 2008, and its own discretionary spending -- which has had its fair share of scrutiny and scandal lately -- was cut by 8 percent, said Quinn.

It was also, council members said, one of the most difficult budget negotiations in recent memory, including stops and starts, impasses and frustration. “I would rather have three root canals,” said Councilmember John Liu last week regarding the negotiations.

Even though the budget was approved before the deadline of June 30, negotiations between the administration and the City Council sputtered partly because of disagreement on how much money there was to spend.

"The mayor's job is to be more conservative," Councilmember David Weprin, chair of the council's Finance Committee, said early in the negotiation process. "The Office of Management and Budget is often very conservative with the hope that things get better. I don't think that's unusual."

On Sunday, Quinn said revenue forecasts are never a perfect science, and there was not a definitive explanation for why the council's revenue estimates were always higher than the mayor's.

Those estimates fueled the debate at City Hall. Council members pointed to them, arguing the city could afford to spend more on senior services, education and youth programs this year -- slashing services is not necessary yet, they argued.

The mayor, however, remained skeptical, which led to the cuts, some council members said.

"It went not to fat, not to muscle, but to bone," said Councilmember Lewis Fidler of the budget. Fidler stood with the mayor and speaker for Thursday evening's budget announcement, but he said he did so to show support for the speaker. He also voted for the budget on Sunday. "We were boxed in because the mayor was intransigent about spending $25 to $50 million of money that was there."

Filder, who suggested the city look at raising the hotel tax to boost revenue, continued to voice frustration over revenue projections up until the council's vote on Sunday, saying the administration intentionally kept estimates low to keep fiscal control out of the council's hands.

In a prepared statement, Councilmember Bill de Blasio voiced similar concerns over revenue projections: "I am disappointed that with a $4.5 billion surplus, the mayor forced the council to cut funding for essential services, including homeless prevention, legal and mental health services, and workforce development. In addition, the New York City Housing Authority, which is in dire financial straights, will be forced to shut senior centers and youth programs across the city. The mayor should not have put the city in this situation, and these cuts will be deeply felt for years to come."

For its part, the administration insists it is important to be prudent in these uncertain times. As a result, it put $2 billion aside for early debt payments in fiscal year 2010 and $350 million to pay expenses in fiscal year 2011. At the budget announcement, when asked why the city would not restore cuts in human services other than education, Bloomberg said the days of increased spending are over.

Quinn agreed. "We would have liked to have everything remain exactly as it was last year," she said. "That’s just not the reality of where we are financially for next yearâ€¦ As much good news there is in this budget, there is some bad news for some people," she added.

The good news will be heard in the city's classrooms. When the mayor and speaker said cuts would be kept out of science labs and English rooms, they got a round of applause.

For months, education advocates have blasted the administration for cutting more than $400 million from the Department of Education. They urged the city to "Keep the Promise" to children and fully fund the city's schools. Appeal letters filled mailboxes, and protests became a regularity on City Hall's steps.

Several members had committed to voting against the budget if cuts to classrooms had not been restored, including de Blasio and the chairman of the Education Committee, Robert Jackson. Both voted for the budget on Sunday night, saying classrooms had been saved from the administration's ax.

The New York City Public Housing Authority did not do as well. Advocates and council members had been pulling for a restoration to keep the authority, mired in deficit, from closing its community centers and senior centers. While $18 million was appropriated in the budget, about half of the centers still will have to close, said the council's Minority Leader Jimmy Oddo.

The authority has 147 senior centers and 136 community centers. Advocates wanted $30 million to keep them all open.

Most council members emphasized on Sunday that it was the administration, not the City Council, that had proposed to cut spending (though they approved those cuts almost unanimously).

"The advocates and the public should recognize who cut and who restored," said Councilmember Inez Dickens of Manhattan.

As opening statements were read at the council's Finance Committee meeting on Sunday, opposition to the slashed city funding was clear. A handful of advocates, who were escorted out by council security, chastised the committee for cutting funding for HIV and AIDS services.

They held up signs reading, "Say no to the City Council attack on people with AIDS." This is likely to be the first of what could be many protests over the city's spending cuts.

Other programs also will feel pain. City officials said about 2,000 summer jobs for youth will be lost, and the Department of Youth and Community Development will see an approximately 20 percent cut in its Beacon program, which puts community centers in public schools.

"This has been one of the most devastating budgets for community services that will have an impact on youth, immigrants and senior services in every community," said Susan Stamler, the policy and advocacy director of United Neighborhood Houses.

Funding for a council initiative to provide English language services and legal services to immigrants was slashed in half, said advocates, and infant mortality programs lost more than $1 million in funding. These cuts raised serious concern over how services will be affected across the city, said Jennifer March-Joly, the executive director of the Citizens Committee for Children.

March-Joly was one of a number of advocates who would have liked to see the administration and the council rescind its 7 percent property tax cut and $400 rebate to cover community services.

"The City Council and the mayor need to really focus on whether that should be done sooner rather than later," said March-Joly. "I think the magnitude of the things they can't restore will make it really difficult for the families that cant afford to go without."

Tough fiscal times, advocates said, are when these services are needed most. Given the cuts to senior and youth services, Councilmember Helen Foster questioned whether the council was too quick to pick education and classroom cuts as its priority.

"There are a lot of organizations and communities that are going to feel the pain of this budget," said Foster. "It would have been nice to spread it out more evenly," she added, referring to the council's support of different services.

While arguing families need the property tax cut and rebate to make it through the fiscal crises, Bloomberg did not rule out revisiting them in the future.

"When the adjustment appears not to be correct, better or worse, we have the ability to get together and change our plans," said Bloomberg. "We'll try to address it before we get into crisis mode."

There is no city regulation that prohibits the council or the mayor from raising property taxes or revising the budget later in the year -- if it comes down to that.

Some members hope the city will revisit the tax rebate as well as an increase to the hotel tax sooner rather then later. Councilmember Letitia James was the last member to offer general comments Sunday night, and she said just that.

"This surely falls on the shoulders of the richest man of the city of New York -- Mayor Michael Bloomberg," said James. Following that statement, there was a brief, practically melancholy, moment of silence in a normally buzzing chamber, roll call was called and the council approved the budget. Â