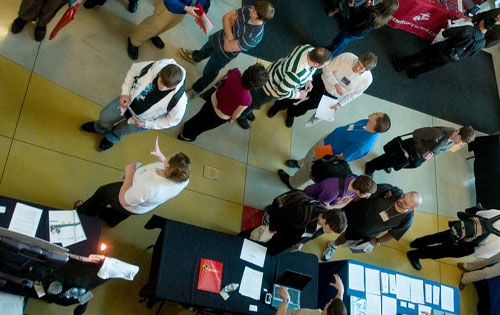 Photo from Eastern Washington U
Hopeful visitors at a university career fair. Graduates are facing the longest economic downturn since the Great Depression.

This month marks the second anniversary of the onset of the Great Recession -- the steepest and longest downturn since the Great Depression of the 1930s. Although the recession started later in New York City -- August 2008 was the peak employment month here -- the number of city residents unemployed has doubled since early last year to over 400,000, and the local unemployment rate in November was 10 percent (it declined from 10.3 percent in October only because 12,500 people dropped out of the labor force.)

Wall Street profits and bonuses may be recovering, thanks to the unprecedented financial bailout, but the local job market is about as comforting as a Lower East Side cold water flat in the dead of an 1890s winter. Job losses have hit hardest in the city’s minority and low-, moderate-, and middle-income neighborhoods. Long-term unemployment -- reflecting jobless spells lasting more than six months -- is even higher in New York City than the record-high national figure. Foreclosures and personal and business bankruptcies are all rising as the prospects for an economic rebound recede further into the distance.

The dire condition of the local unemployment crisis is repeated around the country. Nationally, 27 million Americans are unemployed, underemployed, discouraged or otherwise only marginally attached to the labor force. Fourteen states have double digit unemployment.

At the beginning of this year, great hope was placed in a big and bold federal stimulus program. The recovery act -- formally known as the American Recovery and Reinvestment Act -- succeeded in pulling the teetering economy back from the brink, but the headwinds were too fierce to keep the national unemployment rate from moving into double digits for the first time since the early 1980s. Technically, economic growth resumed in the second half of this year, but most economists fear that underlying conditions will prevent the act's stimulus from translating into a sustainable recovery.

To a degree never seen in the post-World War II era, the housing market remains paralyzed by the foreclosure epidemic, and households burdened by debt and worried about the bleak job outlook are holding back consumer spending. As long as consumer spending remains anemic, businesses won't hire back workers, not to mention invest in expansion. It now seems that while the recovery act was the right medicine for the ailing economy, the dosage was not sufficient to provide the cure.

The purpose of federal stimulus is to inject spending into the economy -- whether through state and local governments, brick and mortar infrastructure projects, or aid or tax cuts to individuals -- when the economy lacks necessary spending impulses of its own. To do that, the deficit must rise. Otherwise, overall spending remains too shallow for a self-reinforcing cycle of spending and job growth to get into gear.

As the recession begins its third year, Washington is again turning attention to measures to curtail job losses and boost job growth. Before adjourning for the holidays, the House of Representatives approved legislation that reprised three elements of the recovery act: state fiscal relief, aid to the unemployed, and infrastructure. Each of these three areas would receive roughly $50 billion.

State Fiscal Relief: Because the downturn was more severe than anticipated at the beginning of the year, many states, like New York, found themselves with mid-year budget problems when tax collections faltered. The Center on Budget and Policy Priorities reports that we are seeing the steepest decline in state tax receipts on record . Collections from New York’s personal income tax â€“ the state’s largest tax source â€“ are projected to fall by nearly 15 percent in 2009, before factoring in a temporary surcharge. Next year, combined state budget gaps are expected to exceed $180 billion. Economists at Goldman Sachs have projected that state government budget cuts and tax increases would reduce national economic growth by about two-thirds of a percent from mid-2009 through mid-2010.

Since it now appears that much of the recovery act's state fiscal relief will run out before state tax collections recover, there is concern that without further relief states will have to cut spending further, creating an even greater drag on any potential recovery. The new House measure provides $23.5 billion to continue a temporary increase in the federal share of Medicaid expenses, $23 billion to retain 250,000 teachers and repair school buildings, $1.2 billion to pay for 5,500 police officers, and $1.8 billion for fire fighters, AmeriCorps workers, summer youth jobs, and College Work Study jobs. Because New York's share of the recovery act's state fiscal relief was roughly 10 percent, the Empire State could receive $4 billion to $5 billion in new federal aid should the House bill become law. 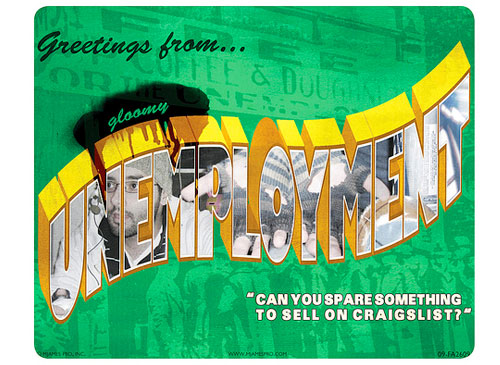 Aid to the Unemployed: Since state unemployment benefits run out after 26 weeks, the federal government usually steps in during severe downturns to pay for benefits when workers remain jobless for more than six months. To further extend federally funded long-term benefits and to continue for another six months providing health care subsidies for the jobless, the House package would provide $53.3 billion. New York received about 6.7 percent of similar aid under the recovery act, suggesting that the new authorization would provide about $3.5 billion to unemployed New Yorkers.

Infrastructure Spending: Construction has been one of the hardest hit sectors during the downturn, and there is interest in Washington in providing additional aid for government infrastructure that increases long-term productive capacity. Of the $37 billion in transportation and infrastructure funding in the House bill that would be allocated to states by formula, preliminary information indicates New York State could receive $1.2 billion for transit, $1.1 billion for highways and bridges, and $108 million for sewer treatment projects.

Senate action is not expected until January, most likely following final action on health care reform. In addition to the areas covered in the House legislation, January might see consideration of two White House proposals, a tax credit aimed at creating jobs in small businesses and additional funding to promote job creation by making buildings more energy efficient.

In Washington, opposition to more jobs funding usually comes with an unmistakable partisan fervor. Opponents often argue that jobs funding will increase the federal deficit to unsustainable levels. Critics of more job recovery spending talk as if the recovery bill and President Barack Obama's budget policies are the main reason for the looming federal budget deficits. In fact, tax cuts enacted under President George W. Bush, the wars in Afghanistan and Iraq, and the economic downturn account for 85 percent of the federal deficit over the coming decade.

Obama appears to be undeterred. At the White House Jobs Summit in early December, he said: "The single most important thing we could do right now for deficit reduction is to spark strong economic growth, which means that people who've got jobs are paying taxes and businesses that are making profits are paying taxes."

Any additional funding for jobs is complicated by some public misunderstanding of the recovery act's impact. Critics have made the disingenuous argument that jobs retained by spending under the act don’t count. And in general, while it is impossible to specifically track the number of jobs created by the billions of dollars that has gone to individuals in the form of unemployment compensation, food assistance or tax cuts, simple logic suggests that such spending has helped businesses retain or hire additional workers. Most such assistance provided by the recovery act has gone to low- and moderate-income individuals and households that are very likely to spend every dollar they receive.

The Center on Budget and Policy Priorities has estimated that seven of the law's programs providing tax cuts to moderate- and middle-income families or direct assistance to the unemployed, food stamp recipients or the elderly and the disabled, will keep 6 million Americans from falling into poverty in 2009 and will reduce the severity of poverty for 33 million others . The American Recovery and Reinvestment Act will keep 258,000 New York City residents out of poverty this year and will help an additional 161,000 New York State residents outside of the city stay above the poverty line.

Gov. David Paterson's office estimates that over $31 billion will come to New York residents as a direct result of the act's spending. This estimate does not include the individual or business tax cuts that comprised over a third of the overall $787 billion package.

New York City and the nation face an immense job creation challenge. Nationally, to bring the unemployment rate back to pre-recession levels and allowing for population growth, we need to add 580,000 jobs each and every month over the next two years. We have yet to see a single month with any net job growth at all over the past two years. In the absence of further federal action to spark job growth, millions of Americans will be consigned to misery for years to come.