Why is the mayor smiling?

Every year since he took office in 2002, Mayor Michael Bloomberg has faced a budget deficit, and responded by cutting libraries, closing firehouses, and raising taxes. Now the city is expecting to end this fiscal year (on June 30) with a $3.3 billion surplus - one of the largest surpluses in city history, even bigger than the ones Giuliani had during the dot-com boom years.

"We have a reason to have a grin on our face," said Bloomberg.

Should the average New Yorker be smiling?

It depends. Using the budget surplus of $3.3 billion from this year, Mayor Bloomberg is trying to give nearly everyone in the city something to be happy about in his proposed budget, called the Executive Budget, for fiscal year 2006, which begins on July 1, 2005. No mayor has ever tried to spend so much surplus money in a single year, according to Elizabeth Lynam of the Citizens Budget Commission.

The mayor and the City Council must agree on the details of this budget by June 30.

What is he proposing?

The mayor is proposing $500 million worth of tax cuts. He will ask the State Legislature in Albany to cut the sales tax on clothing and shoes under $110 from 8 to 4 percent. Bloomberg is also giving a $400 rebate to those who own a home, co-op, or condo, just as he did last year.

In contrast to previous years, when he proposed cutting senior citizen programs, the mayor wants to spend $17 million more on senior centers and meal delivery programs. Instead of threatening to close zoos, as he did in the past, he is proposing money to renovate them.

Why does the city have a surplus when a few years ago it had a $6 billion deficit?

The economy has improved and tax revenues are higher than expected.

The city's economy has recovered from the downturn that occurred after the terrorist attacks of September 11, 2001. Wall Street profits, which account for about a third of the city's tax revenue, brought in twice as much to the city's coffers in 2005 as in 2002.

The real estate market is strong, and the city charges a transaction tax every time a property is sold or refinanced.

And the increases in the personal income tax, sales tax, and property tax that Mayor Bloomberg instituted in 2002 and 2003 have also generated a large windfall of money.

Two groups -- fiscal watchdogs and city workers -- are not happy.

Many budget experts argue that the mayor is thinking more about the election in November than about future deficits.

"Taking a $3.3 billion surplus and spending it all next year is pretty short-sighted," said Charles Brecher of the Citizens Budget Commission. "To have a surplus of that size and not use a penny of it to pay off debt... it's a spending spree."

By next year, all of the surplus will be gone.

Teachers, police officers, firefighters, and other city workers - who are all seeking new contracts and raises - say the mayor is leaving them out of the budget.

"Their priorities are out of whack," said Randi Weingarten of the United Federation of Teachers. "This is the largest surplus ever. Yet, there is not a single penny for teachers, police officers, firefighters or other municipal workers."

To the unions, the mayor replied, "We don't have the money."

Why does the mayor say he doesn't have the money for unions?

The unions representing teachers, firefighters, and police rejected the mayor's offer as inadequate to keep and attract employees when they can earn so much more in the surrounding suburbs.

Rather than using the surplus for larger pay raises, Bloomberg plans to give some of the money back to taxpayers.

The mayor wants to repeal the city's sales tax on clothing, which will cost $256 million a year. The property tax rebate costs $230 million a year. And the personal income tax surcharge for individuals earning more than $100,000 - which generates about $600 million a year for the city - is set to expire.

Even though the mayor isn't giving city workers raises, the city's labor costs are rising by 20 percent.

Pension costs are the fastest growing share of the budget. According to the mayor's office, pension and fringe benefit costs rise five percent each year; by the year 2008, the city will pay $10 billion a year in pensions or about 20 percent of the annual budget. The state, not the city, controls pensions.

Other costs are rising as well.

Unlike most other cities in the nation, New York City is required to pay a portion of the state's Medicaid costs.

Where does the mayor get these budget numbers?

Projecting future revenues and expenses is not an exact science. The city uses a variety of economic models to try to predict what will happen, but politics also come into play.

The City Council complains that the mayor purposely underestimates tax revenue, because the mayor doesn't want the city's budget situation to look too rosy, or the state and federal government will be less likely to send aid.

The budget is also negotiated and modified throughout the fiscal year, which begins July 1.

In the fall, city agencies, after consulting with community boards, submit their budget requests. In January, the mayor releases what is called the Preliminary Budget, which shows how much the city expects to spend and projects how much tax revenue will come in each month. The community boards, borough presidents, and the City Council all make recommendations.

In the spring, the mayor presents a revised budget, called the Executive Budget. The mayor then negotiates the details with the City Council, a frequently contentious and theatrical process.

Both sides must reach an agreement for a balanced budget by June 30. 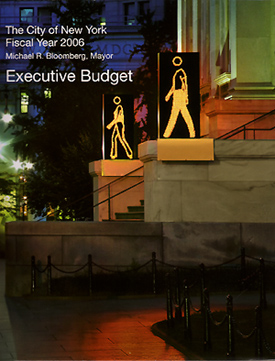 How will the next mayor deal with the future deficits?

Mayor Bloomberg's "good news" budget was difficult for his political opponents to criticize, but they all said they would do something differently if elected in November.

C. Virginia Fields did not issue an official response to the mayor's budget, but she has said, if elected, she would give city workers raises.

Anthony Weiner said he would institute a tax on people making more than $500,000 a year.

Fernando Ferrer criticized the mayor for allowing lawmakers in Albany to postpone action on the Campaign for Fiscal Equity lawsuit, which requires an increase in funding for education. He has called for a tax on Wall Street to help fund education.

City Council Speaker Gifford Miller took credit for the decrease in the sales tax, which the City Council has proposed in previous years. He believes that the personal income tax surcharge on people who make more than $500,000 a year should continue.

Bloomberg wouldn't even try to explain how the next mayor -- whether it is himself or someone else -- should address the future deficits.

"I do not have a good answer for you on how we are going to come up with an extra $4.5 billion," he said.