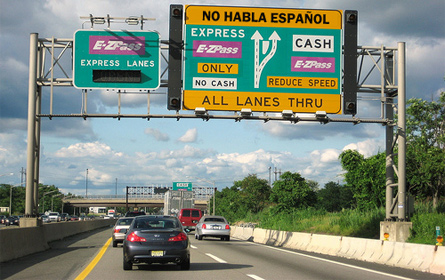 Last month, colleagues began telling Maria Rizera -- one of 16 Spanish-speaking workers at the Staten Island E-ZPass call center -- that, unless she began taking calls in English only, her job was going to get a lot tougher. To protest what they see as wage discrimination, Rizera's coworkers were walking away from the Spanish language line.

"People just kept quitting the Spanish queue, and I stuck on until, all of a sudden, I was the last one at the call center taking these calls," Rizera said. "And I looked at my paycheck that week, and said, 'I can’t keep doing this.'" So Rizera quit speaking Spanish on the job, and people seeking help from the call center can receive it only in English.

This reduction in service is the result not of a budget cut but of a dispute between 292 employees at the recently unionized call center, and the private company that operates the center, Texas based Affiliated Computer Systems, which merged with Xerox last month. In May, the call center workers voted to join a union. Within 24 hours of the vote, Affiliated Computer Services â€“- which handles all administrative aspects of the E-ZPass system under contract to public transportation agencies -- announced employees would no longer receive hourly wages. Instead they would be paid a piece rate, based on the number of calls they handled. After the pay-per-call system went into effect in August, paychecks of Spanish speaking workers quickly slid below that of their coworkers because Spanish calls take longer to complete.

Since August, union,CWA Local 1102, a branch of Communication Workers of America, says it has been pleading for the company to come to the bargaining table to settle this and other matters in a formal contract. But Affiliated Computer Services/Xerox refuses to recognize the union, an action CWA calls illegal.

Last week, all 14 workers in one of the call center's most pro-union sections, the tags department, were fired. The firing came only days after seven tag department employees stood up from their desks for 60 seconds while working to demonstrate their wish for the managers to recognize the call center’s union.

With allies in city and state government, Communications Workers are currently waging a campaign to encourage the Metropolitan Transportation Authority, Port Authority of New York and New Jersey, and the New York State Thruway Authority to drop their contracts with Xerox/ACS, a corporation the union says has gone "rogue."

For two centuries, per-unit pay has been an explosive subject between labor and management. Employers say it rationally ties pay to performance. Workers say the system degrades work quality and leads to confusing and inequitable pay systems.

So go the arguments on Staten Island today.

Under what management calls the ABC (Activity Based Compensation) system, a series of new stipulations affect weekly pay. These include the number of calls made, at 87 cents per completed call; call quality, based on management's listening in on random calls; and monitoring electronically how promptly the workers clock in and out of work.

"Our primary focus here is our customers -- customer experience is paramount," said Kevin Lightfoot, a spokesperson for ACS. "The new system gives our agents the capability of answering questions quickly and efficiently."

Lightfoot added that three quarters of the workers at the Staten Island call center now make more money than they did before the piece rate system.

The union disputes this number and accuses the system of leaving workers in the dark on how wages are determined, and causing the discrimination against Spanish-speaking workers and customers.

"For a year or so there was a lot of talk about the ABC system. Everyone was pretty scared for their wages," said Isaac Colinares, who has been working at the call center since 2007. "Then the management put it in place, and our pay became very inconsistent. My paychecks go up and down weekly. There are too many variables involved, so no one knows what's going on and the management can't explain it to anyone. It's a mess."

"Now if I clock in two minutes late, or take my lunch break five minutes late because a customer call took longer to complete, they deduct from my paycheck," said Rizera. "I don’t think that’s really fair."

Then there is the Spanish language problem. Because the E-ZPass website is exclusively in English, many Spanish-speaking calls require translating the website into Spanish. These calls occupy over twice as much time as calls in English, making working the line a burden that several workers described as being financially untenable.

ACS does pay Spanish-speaking call center workers $25 every two weeks in compensation. Rizera said this additional pay did not come close to adjusting for the estimated weekly hundred-plus dollar deficiency in her paycheck that made her ultimately quit the line.

"Because ACS will not bargain with the union, the 16 Spanish-speaking workers have taken it upon themselves to improve their situation," said Tim Dubnau, the Communications Workers' organizer for District 1. "This is the definition of a labor dispute."

According to Lightfoot, ACS was not aware that workers were quitting the Spanish queue until the union's recent press conference on the issue.

"We have not heard any reports of Spanish-speaking callers having been denied help,” Lightfoot said. "Now we’re working with the government agencies to look at how to solve the problem."

Lightfoot added that, of all the customers E-ZPass deals with, 0.15 percent are Spanish-speaking.

"Regardless of their work, absolutely no one is getting paid less than $12.50 an hour," Lightfoot said, referring to the current "parachute period," which sets a floor for wages while management and workers get used to the ABC system.

Although ACS insists that it will not lower the $12.50 wage floor, workers are worried.

In 2005, ACS purchased a call center in Auburn, Wash. Soon after, the company instituted its ABC system and workers filed a complaint, claiming that, under the piece rate system "the plaintiffs have suffered lost wages and economic loss."

In a public statement released by CWA, Mary Sump, one of the plaintiffs in the Washington suit against ACS, said, "ABC meant minimum wage for me. There were also so many issues with my pay after ABC, and I could never get a straight answer from the company. About half or more of my coworkers were forced to quit because of the loss of wages under ABC."

Lightfoot said he has no knowledge of wages dropping or of employee discontent at the Washington State call center.

Linda Parsons, executive director of Utah Jobs With Justice, said that she knows of at least several customer service representatives making minimum wage at another Affiliated Computer piece-rate based call center, this one in Salt Lake City, Utah. Parsons added that 50 percent of workers at the call center make no more than a dollar over minimum wage, and called the conditions at the Utah call center "close to that of a sweatshop."

Workers at the non-unionized Salt Lake City call center refused to speak on record for fear of being fired.

Struggle for a Contract

Union organizers see the Spanish-line issue and last week's firing of the tag department workers as the most recent phases of a complicated effort to create an effective union at E-ZPass. During the union drive last year, the National Labor Relations Board filed complaints against Xerox/Affiliated Computer Systems for alleged intimidation of union supporters, and the unlawful firing of a union supporter. The Communications Workers claim also that overtime pay was taken away from a union-supporting department, and that the company intentionally disseminated misinformation to affect the outcome of the union election.

Affiliated Computer denies that it meddled in the election.

Lightfoot said that last week's firings simply represent part of an effort to make the call center more efficient by replacing the department’s human labor with a computerized system. "We automate. We make our systems more efficient," Lightfoot said. "That's just what we do."

Although the National Labor Relations Board has officially recognized the Staten Island call center's union, the company refuses to bargain, arguing that all E-ZPass workers in New York State should have been included in the vote. Xerox/ACS has taken this appeal to the National Labor Relations Board in Washington. To the union's consternation, Xerox/ACS says it will not come to the bargaining table as long as the appeal awaits its hearing -- a decision no one expects will come soon.

With only two of its five members currently serving -- a Democrat and a Republican, who generate mostly one-to-one deadlocks -- the National Labor Relations Board is debilitated. A two-year impasse over appointments has created an enormous backlog of labor disputes. There is no telling how long Affiliated Computer's appeal could wait for a verdict.

Arguing that the case has no legal foundation, the Communication Workers accuse the company of obstructionism in exploiting the currently non-functioning National Labor Relations Board as a pretext to defy labor laws.

The union now believes its last option is to convince the New York agencies to drop their contracts with the firm.

"The laws are not being enforced, so now we need the authorities to step in and resolve the situation," said Pete Sikora, director of special projects for CWA District 1. "This is as close as you can get to legal certainty without a verdict."

The city’s contract with Xerox/ACS does allow the city "suspend, postpone, abandon or terminate the contract at any time and for any reason,” as long as the private contractor is given 45 days notice." The contract, which is identical for all the different agencies involved with ACS/Xerox, does not, however, specify in what languages other than English E-ZPass must provide services.

None of the agencies involved seem poised for action. "The situation is between ACS and the call center,” said Joyce Mulvaney, spokeswoman for MTA Bridge and Tunnel. "There’s litigation pending so it’s not something we’re commenting on."

Pressure on the Company

"The MTA and Port Authority did not appear to even notice when their contractor for E-ZPass cut Spanish language service entirely," said Peralta in an email. "We need a legislative guarantee of good customer service for all New Yorkers."

Other elected officials have pledged their support to the Staten Island workers and expressed frustration at what they see as privatization run amok.

"It is a disgrace that a private company is exploiting a public franchise with no regard for a large segment of the population," said Queens City Councilmember Julissa Ferreras" in an email. "It is a shame and a scandal that the MTA, the Port Authority and the Thruway Authority have not brought pressure to bear on Xerox/ACS to negotiate with its workers, pay them fairly, and restore service to Spanish speakers."

"Xerox/ACS must immediately reverse its illegal firings and improve customer service at E-ZPass," said Savino. "Xerox/ACS's dismal record of treatment of their employees is compounded by their current pay-per-call scheme, which forces workers to rush through calls, causing customer service quality to suffer."

Xerox/ACS says that it is trying to place the 14 tag department workers in other departments, but there are no guarantees.

For now, although the call center's union remains very active, bargaining still takes place only between Xerox/ACS management and its individual employees. The high unemployment rate raises cost of job-loss, and call center workers feel the lack of bargaining power.

"I'm not sure what to expect next, but I'll go with the flow," said Colinares. "I don't think I really have a choice in the matter."