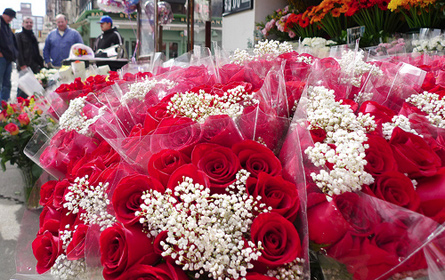 Is everything coming up rosy for the city's finances?
Photo (cc) 2010 pixonomy

Given the gloomy budget and economy forecasts of a year or even several months ago, New York City has emerged in remarkably good shape, according to the New York City Independent Budget Office's Analysis of the Mayor's Preliminary Budget for 2011. In sharp contrast to alarming stories of huge current and future deficits in New York, New Jersey and many other states across the nation, the budget office's New York City story offers much good news.

That includes a budget surplus of nearly $3 billion for the current fiscal year, a city recession much milder than expected and milder than the last two recessions, a solid preliminary budget for 2011, and long-term budget prospects that are much more optimistic than the mayor's. Little gloom, no doom.

The city's fiscal condition is the result of some good luck -- especially a lot of federal aid and an unexpectedly quick Wall Street turnaround. It can also be attributed to a succession of major budget actions by the Bloomberg administration: agency budget cuts that began in April 2007 and have been repeated in every financial plan since, and increasingly regressive tax policies.

The report places the fiscal good news in a larger social, economic, and political context that helps identify the budget’s winners and losers.

The recession did not get as bad here as many had feared it would. The Independent Budget Office acknowledges that it, like the mayor's Office of Management and Budget and other fiscal monitors, was way off in forecasting the depth of the recession in the city. The city indeed lost a lot of jobs -- 172,900, with an unemployment rate that jumped from less than 5 percent to 10.4 percent in January -- but far fewer than the 254,500 lost jobs the Independent Budget Office projected a year ago.

Fewer job losses mean less lost revenue. At the same time, the federal bailout of the nation's financial institutions played a key role in boosting revenue. The surprise was how quickly Wall Street firms reported profits -- $61.4 billion in 2009 -- which almost totally erased their $62.7 billion in losses over the previous year and a half. Those profits translate into higher business and personal income taxes for the city and account for much of the nearly $3 billion surplus for the current fiscal year ending June 30.

The surplus also came from the city's use of $600 million in reserves and accounting adjustments that a conservative Office of Management and Budget typically sets up each year and nearly $500 million of new agency cuts in the last half of this fiscal year. This fiscal year -- as in the past several years -- surpluses form the previous year also played a role. Without the use of these surpluses, expenditures would be $2.7 billion higher than revenues this fiscal year and $2.8 billion higher next fiscal year, according to the Independent Budget Office.

The repeated use of $3 billion or more of surpluses in one fiscal year to prepay the next year's expenditures has given the mayor unusual flexibility in budget balancing. It has become a kind of rolling "rainy day fund" that once raised eyebrows among fiscal monitors and the City Council for its expansion of mayoral budget powers, but now seems generally accepted.

The economic and fiscal news is so good, in fact, that fears that the surpluses will finally end because of the recession seem unwarranted. Although the Independent Budget Office currently projects a surplus in 2011 of just over $100 million, it also foresees future budget deficits that are extraordinarily small when compared to the mayor's -- and its own -- forecasts in recent years.

The reason for the big difference is that the Independent Budget Office forecasts what it calls "moderate" economic growth in contrast to the mayor's budget office's forecast of a "slower and weaker recovery." As a result, the Independent Budget's Office's forecasts of tax revenues are $2.0 billion higher than the mayor's for 2013 and $2.9 billion higher for 2014.

The bailout and clever accounting alone do not account for the changed fiscal picture. Budget cuts also played a role.

The New York State Financial Control Board in its November staff report projected that the cuts to agencies from all the financial plans since January 2008 would total over $3.4 billion lost in 2011 alone. Those cuts, along with the unanticipated new revenues, have stabilized the city's fiscal condition for the near term -- and possibly for much longer -- but the impact of the cuts is not generally known. The Independent Budget Office report offers some clues.

The Department of Education, for instance, has lost a projected $546 million since June 2009's adopted budget, according to the Independent Budget Office. Of this, $261 million came out of classroom funding. If the mayor’s proposal to give teachers only a 2 percent raise -- versus an anticipated 4 percent -- does not fly, the city could lose an estimated 2,500 teacher positions. (State budget cuts could also create large reductions.) An unexpected increase of 14,000 students in the schools this year has further strained the education budget.

The news in education, though, is comparatively positive. Education spending increases by $1.1 billion, from $18.2 billion to $19.3 billion, over the next four years. (Budget "cuts" in practice often mean simply a reduction in the size of previously projected growth.) In almost all other agencies expenditures actually fall over the next four years.

Senior and youth employment services are likely to see big cuts, primarily because of cuts in federal and state aid. The Independent Budget Office reports that the Department for the Aging sees a worst-case scenario of closing 100 senior centers, a third of the city's 301 centers. Youth employment this summer could drop by 35,000, or 67 percent.

Police (an average 0.8 percent cut per year) and fire departments (1.9 percent ) have similar cuts over four years, although the mayor has ruled out the layoffs of any police officers. Sanitation is the exception to the cutting, because of the cost of exporting waste to landfills outside of the city, which increases an average of 2.9 percent each year.

The mayor has two modest, reasonable tax increases in his preliminary budget: extending the mortgage recording tax to coop loans (technically not mortgages because they cover shares in a building) and extending the city sales tax to fuel sold to airlines. Together the two would raise an estimated $211 million in 2011.

There are no changes in the major taxes. But the mayor has hiked taxes to increase revenues in the past, and the Independent Budget Office traces the impact of earlier changes. For example, the city sales tax rate increase last year (from 4.0 to 4.5 percent) raises an estimated $468 million in 2010. The canceling of the 7 percent property tax rate cut (in effect in fiscal 2008 and half of fiscal 2009), added $1.3 billion to 2010’s property tax revenues.

It is interesting to note that the property tax rate cut (plus a homeowner rebate of $400) was in place at the same time that budget cuts in education and all other agencies -- totaling $3.4 billion in 2011 -- began. And the Independent Budget Office reminds us that the two thirds of city residents who are renters got no break. These same people, because on average they make less than homeowners, also were more burdened by the sales tax increase.

Along with its review of the numbers, the Independent Budget Office report also makes brief allusion to some management issues in the Department of Education. The law renewing mayoral control of schools in 2009 gave the office, along with the city comptroller, new powers to monitor the department's opaque financial systems.

The challenge facing the IBO in its new role is clear in its several-page analysis of the department's policies and practices. For example the IBO cites "another reorganization of how schools receive operational and administrative support through its central bureaucracy, the effects of which have not yet been fully accounted for in the operating budget." That sounds like the department at this late stage of the budget process either does not know what the effects of the change are or hasn't made them clear to the budget office, a key monitor.

The IBO seems to acknowledge its challenge in another example: "Another change that will affect DOE's overall budget next year is yet another reorganization of the department’s back office support for schools." The report goes on to explain (what the recent Preliminary Mayor’s Management Report ignores) the three re-organizations that have taken place.

Briefly, the 32 community school districts inherited by the Bloomberg administration were first collapsed into 10 regional centers. Then the centers were disbanded and transformed into Integrated Service Centers. Now the department has created Children First Networks, an outgrowth of an effort called the Empowerment Zone, which gave 500 schools more independence from the central office and evolved support networks within the zone.

All of this has budget implications. It will, for example include the elimination of 80 administrative positions, the disbanding of several support organizations, and closing of the Integrated Service Centers. But assessing those impacts will be difficult since the Independent Budget Office has little or no public information from the department about rationales or ultimate impacts or these changes.

On to the Adopted Budget

As the mayor prepares to release the executive budget and continues negotiations with the City Council, the Independent Budget Office's analysis is a useful background paper for all those interested in a reasonable adopted budget. It suggests that economic and fiscal conditions are much more positive than the mayor has acknowledged.

It suggests, on one hand, that much of what the mayor has done to reach this point of fiscal stability is admirable. Raising the property tax rate 18.5 percent in 2003 after a decade of a frozen rate is probably the most important.

But much is also disturbing. The impact of service cuts, narrowly targeted tax cuts, and regressive tax increases have received far too little attention. The city's wealthiest households continue to pay at a lower personal income tax rate than they did in earlier recessions.

One reading of the report is that there is enough cushion in the current economy and fiscal condition to redress some of the recent inequities, to be more creative and certainly to be less punishing. Even if big cuts in state aid to the city -- ignored in the preliminary budget itself -- materialize, there is arguably enough good news in recent fiscal developments to minimize any further cuts in essential city services.