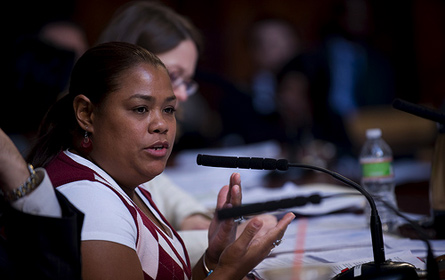 The city’s annual January to June budget process, mandated by the City Charter requires the mayor and City Council to do two things to foster a public debate. The mayor must provide useful information about his proposed budget to the council and public, and the council has to make an initial response to the mayor’s proposal.

On both scores, the process we have seen so far this year fails. With less than five weeks to go before the budget deadline, we have seen steep, unexamined budget cuts, little public debate and no City Council alternative. Yet the fate of some 11,000 public-sector jobs and an unknown number of service programs, from libraries to health care to summer youth jobs, remain up in the air.

The mayor’s May executive budget adds only a few wrinkles to the tough January preliminary budget that proposed $1.2 billion in agency cuts and a modest $219 million tax revenue extending the mortgage recording tax to co-ops and the city sales tax to airline fuel. The budget cuts now are up to $1.3 billion, and the tax plan has been abandoned.

The executive budget anticipated some $223 million more in tax revenues for this fiscal year than had been projected in January. It also calls for a draw-down of $213 million from labor-reserve money, dollars set aside in anticipation of future -- and costlier -- labor settlements, and the cashing in of $400 million in unneeded reserve funds this year. But these additional monies do not go toward softening the proposed cuts. Instead they will build this year’s budget surplus, to $3.3 billion.

The 2011 plan hinges on two big uncertainties. First, it is balanced on assumed further labor actions: another drawdown of labor-reserve money ($268 million, meaning no raises absent labor concessions) and nearly $557 million in labor givebacks on health benefits and pensions.

The other is the state budget. The mayor claims -- although Gov. David Paterson's budget director disagrees -- that there will be a $1.25 billion shortfall in state aid to the city, including a $493 million cut in education aid. The state put the shortfall at closer to $700 million. But in making his cuts, Bloomberg uses the $1.25 billion figure.

As a result, the executive budget says that, overall, nearly 11,000 city jobs would be cut, including 6,414 teachers and other staff in the Department of Education.

The city council’s April response to the mayor’s January preliminary budget does not offer an alternative to the mayor's plan: no alternative cuts, no new revenues. It does make the point that the proposed cuts are unequally distributed.

Its "Key Areas of Concern" section is brief and narrowly defined, focusing only on public safety issues, particularly the January proposal to drop nearly 900 police officers from the city’s headcount. The recent Times Square attempted bombing led the mayor to quickly cancel that cut.

The City Council currently is holding hearings on the proposed cuts. But for the most part, there has been little serious engagement between the members and city agency executives who appeared before them. The education committee report in the April response for example, lists some 52 questions asked of the school chancellor, but not a single reply by the chancellor.

The council seems hard-pressed to get basic information from agencies they oversee. In the response, the economic development committee, for instance, had to ask the department of business services to provide a list of 13 community-based organizations that have received federal stimulus funding, how much each has received, and how many job placements have been made.

The Impact of the Cuts

The council hearings do, however, offer some hint of the impact of recent and proposed agency cuts. The problem the council faces, as its response points out, is that the mayor's preliminary budget, does not itself provide "as required â€¦ a detailed and meaningful analysis of the consequences of budget decisions."

In the report, the council's Committee on General Welfare offered the most detailed picture of budget-cutting impacts. It suggests that although the mayor has claimed an "across-the-board" approach to cuts -- a strategy the council objects to -- the actual impacts of cuts are far from equal. For instance, in the Administration for Children's Services, the number of slots for family treatment/rehabilitation services would be cut by over 9 percent and those for general preventive services by 30 percent. A $3 million teenage abuse prevention program is simply eliminated.

A Human Resources Administration food and nutrition program for people with HIV/AIDS is funded at only 50 percent of its current level. Homemaker services to families with preventive services will get 80 fewer hours of help per year.

In the response, the committee also raised a rare question about city contracting, specifically an Human Respurces proposal to save $7 million by "restructuring" employment services, including contracting out English-As-Second-Language services currently provided by city workers.

The effect of cuts to contracted agencies is an unexamined part of the executive budget. About 15 percent of the city’s $63 billion budget next year will be spent on over 17,000 city contracts with not-for-profit and for-profit organizations and firms. Yet the 238-page mayor's message in the executive budget devotes only one page to the $9.5 billion contract budget for 2011. Contract reductions presumably will mean a substantial, if unknown, number of private-sector layoffs, in addition to the proposed 11,000 cuts in the public workforce.

The health committee identified a number of disproportionate cuts. Two HIV contracts at the Health and Hospitals Corp. are cut, one by 12 percent and another by 26 percent. Nurse coverage in all elementary schools â€“ private and public â€“ with fewer than 300 students is eliminated (saving $3.1 million).

The Committee on Youth Services notes that with state and federal funding eliminated this year only 18,000 youth can be provided summer jobs, although last year over 149,000 applied.

The cuts to libraries, as reported to the committee on cultural affairs are extraordinary. In Brooklyn 30 percent of the library staff would be laid off, in the New York library, which covers Manhattan, the Bronx and Staten Island, 27 percent. The New York library would be open only 28 hours a week -- a 48 percent cut in hours -- and the Queens library open only 25.

Libraries are a favorite area for mayoral cuts that are subsequently restored by the council, but these cuts are much more severe than those in years past.

Then there are the cuts directly on poor households. As illustrated in testimony before the housing authority committee, the New York City Housing Authorityacknowledges it has two options to deal with a $45 million gap in funds the Section 8 housing voucher program. It could lower Section 8 subsidies for 30,000 tenants, in effect raising their rent in effect, and saving $20 million, or terminate 10,000 tenants’ Section 8 vouchers, saving $45 million.

At least one committee, however, was witness to good news. The executive director of the Conflicts of Interest Board, while asking the committee on standards and ethics for a $400,000 budget restoration for the board, said that the increased numbers of council inquiries to his office in recent years "has resulted in this being the most ethical Council during his long tenure at the COIB."

With sketchy information from the Bloomberg administration on budget impacts and no willingness on the part of the mayor to propose or debate alternative budget options, the budget process has become an administrative exercise. The council’s formal response to this -- especially its lack of an alternative plan -- does not give much hope for any challenge to the strategy.

What the public is left with late in the budget process is an administration apparently fixed on getting as many concessions from city labor as it can: labor reserves used to help balance this year's and subsequent budgets, $557 million in annual health and pension givebacks, and the threat of no raises in future contracts without equivalent productivity savings. In education, the administration also want to change provisions, long fought for by the union that require the most junior teachers be the first to be laid off.

This may well be a bluff. Some skeptics think the administration is pushing for some of its cuts -- particularly the slashing of thousands of teaching positions -- as a tactic to pressure Albany for more aid. There may be more surprises, as often happens in the last few days of the budget process, including more revenues to be found in new projections, sudden new savings or more federal aid. The Independent Budget Office, for example, projects substantially more tax revenues in the future than the mayor does.

The council’s lack of urgency in its response may reflect such anticipation and thus signal that it expects to get its usual modest restorations in the adopted budget.

From 2005 to 2009, surpluses averaged $5.7 billion a year, peaking at $8 billion in 2008. The table notes a $3.3 billion surplus for this year, but no surplus at all in 2011 and a $3.8 billion deficit in 2012. In other words, if the intent in each year has been not so much to balance that year’s budget, but to maximize each year’s budget surplus, then the administration has a long way to go in the next 12 months to meet anything like its recent surplus targets.

Without some good-news surprises, then, the city may soon face a ninth and a tenth notch in what the mayor lightly calls his "eight different belt tightenings over the last three years."