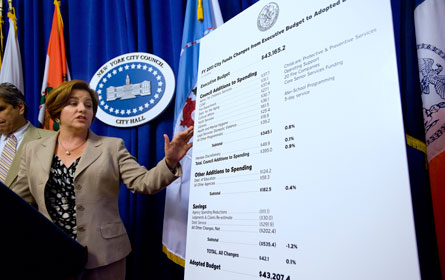 Libraries won't shutter, public pools will remain open for swelter-saving dips all summer long, and fire companies are off the chopping block.

By a vote of 48 to 1, the City Council approved a $63.1 billion budget Tuesday that was less doom and gloom than what many New Yorkers initially anticipated. Instead of shuttering 50 senior centers, council officials say their plan will likely keep half open.

At least seven of 16 daycare centers slated for closure under the Administration for Children's Services will remain open all year. The public advocate's office -- shredded by multiple rounds of budget cuts in previous years -- will get another $600,000.

"This is a responsible, recession based budget," said Council Speaker Christine Quinn. "We had a couple of goals. We wanted to pass a budget that didn’t raise taxes, that didn't expand borrowing, that protected core services."

All that was accomplished, Quinn said.

Nonetheless, some advocates say the neediest New Yorkers will bear the burden of these cuts. The effects of that, they claim, will reverberate for years.

Another Round of Cuts

An assistance program connecting vulnerable or immigrant New Yorkers to health care didn't make it into the budget. The 10-year-old $2 million program was eliminated.

"We don't understand why we were cut," said Palenschat. "It was super, super shortsighted."

The health care assistance program wasn't the only one that didn't survive. Advocates said after school programs were cut in half. Day care programs for seniors have been crippled. Adult literacy programs were also hit.

"The little haircuts that are often talked about are real cuts and critical services for communities," said Susan Stamler, the director of policy and advocacy for United Neighborhood Houses. "This is not a good budget, and I think we need to look long and hard at how we find the additional revenue needed to build and support services for our communities."

In the end, Quinn said, the council couldn't preserve everything. But she said the programs it did save are core services, like $37.4 million to go toward keeping 202 caseworkers at the Administration for Children's Services. Quinn said those caseworkers were added after the death of Nixzmary Brown in 2006.

The council steered $61.5 million to libraries, which will prevent the closure of branches but bring service down from six days a week to five. The council also provided money for mental health services at 12 homeless facilities and $36 million to keep 20 fire companies open.

The mayor initially threatened the city's fiscal plan could eliminate up to 11,000 city workers. Yesterday, Quinn said the council did not have an estimate for how much the city's work force would shrink. Officials said it would be far less than originally anticipated.

All in all, the council added about $397 million to the mayor's executive budget proposal. The fiscal year 2011 budget, which takes effect Thursday, rolls over $3.6 billion in surplus from fiscal year 2010.

For more on who got what in the council's discretionary funds, go here.

While the budget does not raise taxes, the council did approve several increases in fees, including an increase in the elevator inspection fee, a monthly probation fee for those who have been convicted of driving under the influence and another set of fees for those seeking custody of children in family court.

During the vote on the council chamber yesterday, members cheered on colleagues and celebrated the end of the budget season. For some, that struck a nerve.

"While you're clapping and celebrating some New Yorkers are going to be crying," said Councilmember Charles Barron, the lone vote opposing the budget. "This was not a budget of necessity, this was a budget of choice," he added, arguing the council should have taken money from the city's health care trust fund to cover the cuts.

Council members who voted in favor of the budget opposed taking money from the fund, contending the city could need it for even grimmer times.

"Am I totally satisfied with this budget?" asked Councilmember Robert Jackson, the chairman of the Education Committee. "No. Could we possibly have done more? Yes."

But ultimately, he concluded: "Could we have done worse than we have done? Absolutely yes."