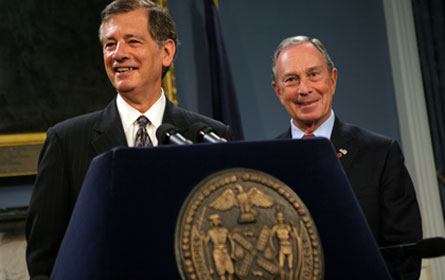 Two recent reports on Bloomberg administration management issues -- one from the administration itself -- offer an intriguing alternative to the widely held view of a business-like machine. Instead, the reports describe surprisingly scattershot styles of management over the past eight and a half years.

One of the reports Maximizing Efficiency in NYC Government: A Plan to Consolidate and Modernize Back-Office Operations, by the mayor's own Office of Operations, reveals an administration with a blind eye to inefficiencies in many agencies. The other by the Center for New York City Affairs -- Managing by the Numbers: Empowerment and Accountability in New York City’s Schools -- finds that the city's largest bureaucracy, the Department of Education, is apparently unable to establish a stable management structure for the city schools.

The city report is an astonishing self-critique of city management eight and a half years into the Bloomberg administration. Rather than a centralized, top-down structure that maximizes efficiencies and accountability, the report finds inefficient, decentralized structures in several agencies. The report has attracted criticism for proposing that some city services be privatized, but it also proposes an array of other "efficiencies" that it says will save $500 million over the next four years and $500 million a year thereafter.

The report on schools is a comprehensive study of Bloomberg and Schools Chancellor Joel Klein's reform efforts in the $18.6 billion Department of Education. Here a centralized, business model does seem to have been in full flower, but the department has been unable to settle on a bureaucratic structure: There have been three major shifts in less than eight years. Throughout them all, though, the department has focused so narrowly on one policy goal -- higher test scores -- that it proved blind to skepticism from teachers, parents and academic experts.

The Office of Operations' report is the first from the new, deputy mayor for operations, Stephen Goldsmith, who was mayor of Indianapolis from 1992 to 2000, where he gained a national reputation for management reforms, particularly in saving money from agency efficiencies and privatizing city services. He also has been a professor at Harvard's Kennedy School of Government, chief domestic adviser to President George W. Bush in the 2000 campaign and a former chair of the conservative Manhattan Institute's Center for Civic Innovation.

The report is remarkable for its blunt assessments. Such candor is a refreshing sign from the office that produces Mayor’s Management Reports twice a year, reports that have been short on assessments, goals and performance measures.

Goldsmith says his "concrete plan" will "turn ideas into efficiencies and save money in creative and previously unexamined ways."

For example, in information technology, the report found that "the city currently operates in a large and fragmented ... environment, consisting of more than 80 data centers that support approximately 3,000 applications in more than 50 different locations." Consolidating and modernizing this infrastructure would save nearly $60 million over the next four years, according to the Office of Operations.

The city collected over $40 billion last year in taxes, fines, rents and other revenue. Yet the report says the city could save $25 million to $35 million by consolidating collection operations and could increase collections by $100 million with stronger enforcement.

Human resources management in the city is "highly decentralized, which has precluded a coordinated, citywide [human resources] strategy." In fiscal year 2010, for instance, the city spent $410 million and had one human resources employee for every 38 workers, compared, the report said, to an average 95:1 ratio in organizations "similar to the city" Centralizing several hundred agency-specific human resources offices, Goldsmith's office believes, would save more than $100 million over the next four years.

The city's management of its office space and real estate is filled with inefficiencies, the Office of Operation concluded. No single agency is responsible for citywide real estate planning as project management is split between agencies and the Department of Citywide Administrative Services. Some 11 percent of city workstations are vacant.

The municipal government manages over 26,000 vehicles and other mobile equipment, at a cost of $667 million a year. Major costs include $283 million a year for maintenance, $250 million for procurement and $120 million for fuel. Nine agencies oversee 125 in-house vehicle maintenance shops, with more than 1,700 staff and over 300 vendor contracts for parts and maintenance services. Eight city agencies manage over 400 fueling locations.

Selling 700 non-emergency vehicles over the last year and a half has saved the city $20 million in one-time spending. Overall, downsizing, consolidating and privatizing services could save up to $71 million over four years, the report says.

If the key management question raised by the Goldsmith report is how the Bloomberg administration missed chances to save $500 million a year in the operations of several relatively small back-office agencies, one big question raised by the Center for New York City Affairs report is how so many management resources in an $18.6 billion agency could be devoted to, as its title aptly puts it, "managing the numbers."

The numbers here mean the scores on standardized tests and the scores for schools themselves, the School Progress scores, which form the basis for the so-called school report cards. In terms of management style, the most interesting finding is that through the three re-organizations of school management, the aim has increasingly been to centralize the system around those numbers.

The first re-organization, from 2003 to 2007, the report notes, dismantled the 32 community school districts that had been in place since the decentralization movement of the 1970s and in its place created 10 administrative regions. That centralized the administration of schools but reduced community and parent access.

The second re-organization, from 2007 to 2010, did away with the regions and placed much more responsibility and accountability on the 1,588 school principals. They were given more authority over budgets, hiring and curriculum, but, as the report says, "In exchange, principals must demonstrate steady and marked improvement in student performance as measured by statistical data, such as standardized tests and graduation rates."

The second re-organization also offered principals management help: They could choose among 11 School-Support Organizations -- specialized Department of Education offices, universities and non-profit organizations, which offered expert advice on teacher development, budget options, curriculum, etc. Operations, such as food, transportation and supplies, were to be handled by borough-wide Integrated Service Centers.

The third shift in management structure, introduced earlier this year, collapses the School-Support Organizations and Integrated Service Centers into new Children’s First Networks. These networks, each with roughly 25 schools, are chosen by the schools to provide similar support services, in many cases across borough as well as neighborhood lines. Every school pays about $40,000 a year to the network for whatever services it offers. Six "cluster leaders" manage these networks.

Apparently in response to criticisms that the chancellor has too tight a grip on schools, his office argues that the current system is "decentralized." But the study's authors point out, "While principals have been given more management discretion, this has been accompanied by new powers and accountability demands coming centrally from Klein's headquarters. ... Neither the [community school] superintendents nor the school network teams have direct control of the principals."

According to the Center for New York City Affairs, it is the chancellor’s Division of Performance and Accountability -- where the school progress reports are developed -- and his Division of School Support and Instruction that "largely oversee schools today." The chancellor’s "restructuring has all but eliminated middle management and abolished day-to-day supervision of principals," the report finds. Extensive interviews with principals suggest that some thrive in this structure and that others simply become lost.

The two reports -- one internal and the other external -- together suggest that any notion of a single Bloomberg administration "management style" is going to be hard to find. The idea, for instance, that this mayor has a business-like, centralized style is belied by the Goldsmith report, at least with regard to several back-office agencies that attract little public (and mayoral?) attention.

The bluntness of Goldsmith's assessment is encouraging. Maybe he can go on to answer some of the overarching questions about the administration's approach -- and its attitude toward centralization and decentralization, perhaps in a revamping of his Office of Operation's tired and largely irrelevant Mayor's Management Report this September. He and the mayor have made a good first step in setting out a management agenda that actually saves money. Tracing its progress in the management report would be a good second step.