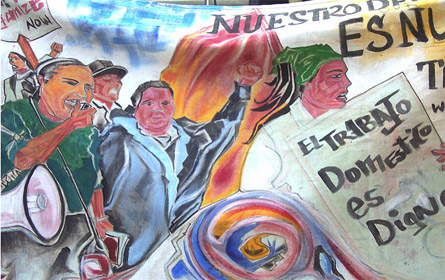 Photo by Poverty Initiative
This poster, displayed at a demonstration several years ago in Albany, calls for dignity for domestic workers.

By amending the Human Rights Law, Workers Compensation Law and Labor Law, the state government gave the more than 200,000 domestic workers in the metropolitan area -- housekeepers, nannies, home aides -- a package of limited rights and benefits previously denied them.

The measure provides statutory protections from harassment, mandates for overtime pay, a six-day (or shorter) workweek and three paid vacation days after the first year on the job even if there is only one employee in a household instead of four under prior law. The changes will extend disability benefits to employees who work fewer than 40 hours per week. While the new laws apply to employees who do some work on an ad hoc, or casual, basis, they do not extend to the teenager who baby-sits once in a while or the person hired to clean out closets every spring. The Human Rights Law will prohibit "unwelcome sexual advances," seeking "sexual favors," or verbal and/or physical conduct which tends to be a condition of employment or creates an "intimidating, hostile or offensive work environment."

Overtime pay is defined as one and one-half times the hourly pay over 40 hours; for live-in domestic workers (who may be present to assist elderly or disabled persons day and night), it is 44 hours. In barring a seven-day work week, the Bill of Rights does not require, but does encourage, allowing that that the day off be the worker's Sabbath or day of worship.

The bill of rights protects workers against discrimination on the basis of sex, race, national origin and religion, but does not extend that to some of New York's other protected classes, such as those discriminated against because of age, sexual orientation or marital status. Nor is the Bill of Rights about discrimination in hiring, salary issues or other conditions; it covers only what is specified.

A Change in Attitude

Organizers working with a coalition of non-profit groups fought for paid sick leave or sick days, vacation days and severance pay but won none of those benefits. While they did not succeed in getting their entire agenda passed, the changes do represent some shift in attitudes toward those who work in other people’s homes, almost all of whom are minority women employed at the lowest pay scales, often working under difficult and demeaning conditions. According to Joycelynn Campbell, organizing coordinator for Domestic Workers United, 93 percent of domestic workers are women, 95 percent are women of color and 99 percent are immigrants, mostly from Caribbean and Latin American countries.

The new benefits are minimal compared to those that unions regularly negotiate for their members, and are less than what was sought by the 10-year old, non-profit organization Domestic Workers United. Union membership and collective bargaining are explicitly unavailable to domestic workers. The Bill of Rights requires an investigation into the feasibility of a union being established and recognized by the state Employment Relations Act, which applies to private employment.

According to the domestic workers law, the labor department was to examine and report on whether an employee organization could be formed in accordance with the State Labor Relations Act; how bargaining units could be formed; whether there are issues unique to the domestic work context; and alternative frameworks for collective organization., and the unionizing portion has not been released. So far, the state Department of Labor has not authorized unions for these workers.

A report has, however, been issued rejecting several other demands. In addition to the collective bargaining issues, the legislature directed the Department of Labor to consider sick leave, notice of termination and severance pay. All were rejected.

Whether and how covered employees will be made aware of the protections and benefits without a union may depend in part on the good will of and information provided by their employers. Information on the workers' new rights will be available on Domestic Workers United website. The group is considering using billboards to get the information out.

Enforcement will require workers to file complaints about violations with the state, but it may be that, even when employers are not in compliance, employees will be reluctant to make formal complaints or will remain unaware of their options.

This could be a particular issue for the affected workers who are undocumented immigrants. The legislation does not address them or their employers. Campbell of Domestic Workers United said, "Immigration is not an issue. Our members are not afraid of speaking out. They have been educated about their rights, and these are workers' human rights."

Legal representation is available pro bono through NELA, the National Employment Law Association and today, as law goes into effect, Domestic Workers United will announce the opening of its legal clinic at 1201 Broadway (Suite 807-8) in Manhattan.

A complaint of harassment or abuse filed with the Department of Labor could expose the employer to further filings if they have, for example, not paid unemployment and disability insurance or workers' compensation, as well as state and federal taxes.