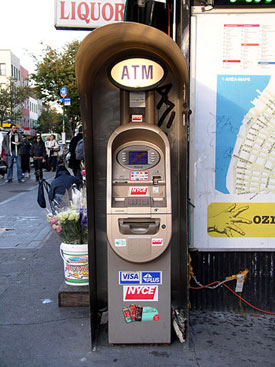 The City Council approved legislation Wednesday to crack down on illegal ATMs, which saturate city sidewalks, provide a haven for graffiti and pose a security risk for cash-strapped pedestrians, officials said.

Flooding nightlife-laden areas, like the Lower East Side, Williamsburg or either Village, these ATMs have proliferated for more than a decade, council officials said.

But they have done so illegally.

"It really makes them not automatic teller machines," said Council Speaker Christine Quinn. "It makes them asking for trouble machines."

Under the legislation (Intro 257-A) fines for having an illegal ATM on your property could increase 20-fold -- from $250 to $5,000. Mayor Michael Bloomberg plans to sign the bill, which was approved by the council unanimously.

Robert J. Benfatto Jr., the district manager for Community Board 4 in Manhattan, which spans the west side from 14th Street to Midtown, knows these notorious ATMs well.

"There is a sign one after the other, ATM, ATM, ATM," Benfatto said of Ninth Avenue. The Community Board supports the legislation, he added. "[The ATMs] take away from the street space. They are open to crime problems."

Benfatto said the board has also received complaints of identify theft and fraud. Other officials said the ATMs can attract theft.

"It's something that begs criminals to stake it out," said Quinn.

The problem was pointed out across the city -- from Grand Street in Williamsburg to Sixth Avenue in the West Village. These ATMs are only illegal if they are located outside of a store on the sidewalk. The bill will not affect ATMs inside bodegas or bank vestibules.

Council officials could not estimate how many illegal ATMs the city hosts, but a quick survey of any neighborhood shows their prevalence.

A report from Manhattan Borough President Scott Stringer in 2009, which pushed for regulations to discourage their use, found 99 in the East Village -- 70 were between First Avenue and Avenue B alone.

Under the bill, the Department of Transportation will give property owners 30 days to remove the illegal ATM. After that, a property owner can be fined between $2,500 and $5,000 every five days if the ATM is not removed. If the owner racks up unpaid fines of $50,000 over the course of 90 days, the city will seize the ATM.

Officials said the retooled ATM ban would prevent the obstruction of sidewalks and prohibit graffiti. This legislation, said Quinn, would increase New Yorkers quality of life.

The council also unanimously approved legislation (Intro 396-A) to establish guidelines for the Commission on Human Rights to report to the City Council. Currently, the commission must file an annual report with the council, but it is given no deadline or guidance.

The bill will require the commission report to the council by March 1 every year and provide details on complaints, inquiries from the public and outreach efforts.

The council also approved legislation (Intro 343-A) to bring the city's energy code up to date with the 2010 state energy code.

Among those named in this round, Det. Omar Edwards, who was the victim of friendly fire in Harlem in 2009, will have a slice of East 123rd Street, and Officer John Scarangella, who was killed in the line of duty, will have a section of Baisley Boulevard named for him in Queens.