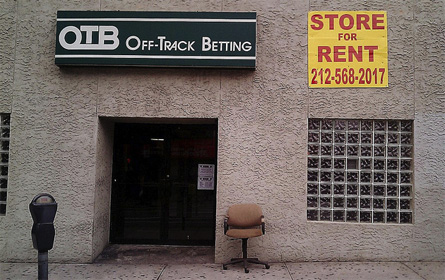 When the doors to the three remaining city OTB parlors shut for the final time Monday night, few New Yorkers probably noticed. The parlors seem like a remnant of a forgotten age -- dank, poorly furnished caves where old men waste away their days laying down their remaining dollars on that horse, the one they have that feeling about.

But the closings represented much more than that. For about 1,000 workers it meant the loss of their jobs. While OTB will remain open in the rest of the state, the shutdown in the city brings great uncertainty. Beyond that, the move could deal a death blow to thoroughbred racing across the state.

The city OTB owes the New York Racing Association around $25 million. About half of the purse money that the racing authority pays out comes from the city OTB, which handles about $750 million in wagers a year.

"A thousand New Yorkers are out of work and the whole thoroughbred racing system in New York is in danger," said Sen. Diane Savino, who presided over the State Senate session at which a bill that would have rescued New York City OTB from bankruptcy failed, by a vote of 29-21. "Like John Sabini [chairman of the State Racing and Wagering Board] said, it wasn't like ripples in a pond from a stone; it was like throwing a boulder in there."

The End of OTB?

The city OTB has long been plagued by financial problems. Former Mayor Rudy Giuliani famously described it as "the only bookie joint in the city to lose money." Mayor Michael Bloomberg, though, said that it wasn’t OTB's fault.

"OTB did make money," Bloomberg told John Gambling on his radio show, "but they (the state) demanded 120 percent of it go to support the racing industry."

The institution has been on the verge of bankruptcy many times. Bloomberg had the state step in to take over the betting franchise from the city in June 2008 after he threatened to shut it down. “One of the great transactions in history was New York City pushing OTB into the state's lap, Bloomberg told Gambling, "because it isn't that OTB didn't have more revenue than expenses, it is that the state, by law, took â€¦ 120 percent of the profits."

Now it seems the parlors will stay closed for good.

Closing the OTB parlors is expected to cost the state $20 million, and the move will leave the state -- i.e. the taxpayers -- with $600 million worth of the OTBs liabilities including the money it owes creditors as well as employee pension and health costs.

Experts say the closure of the city OTB and the loss of the $750 million in annual wagers it brought it in could jeopardize the entire racing industry. Track operators will have less money to keep their doors open, pay jockeys and manage expenses. Sabini has said that he expects the number of race days to decline and possibly to see race tracks close.

OTB chairman Larry Schwartz who is also Paterson's top adviser told a morning radio show, "This is going to have a tremendous impact on the racing industry. I believe upstate tracks will close. Horse farms will shut down, breeders will be moving out of state. Many small businesses that support racing will have to lay off people or shut down their operations. With a 9 percent unemployment rate in the state of New York, the Senate had a chance not to add to those figures by passing a restructuring plan that the Assembly approved."

Beyond those effects, the shuttering of the city OTBs represents another colossal failure by the New York State Senate to function as a legislative body when it is most needed. With the city OTB facing $67 million in debt, Gov. David Paterson put forward a bill that would have given its creditors, including the racing authority and Yonkers race track, use of telephone and internet betting, which are thought to be worth millions, in exchange for forgiving OTB's debt. The bill also would have exempted the city OTBs from provisions believed to be a strain on them. Other regional OTBs would have continued to operate under those provisions.

Republicans opposed Paterson’s bill, because they wanted to extend those breaks to OTB throughout the entire state. Democrats said that they needed to deal with the city OTB first, because it was on the verge of bankruptcy. They also noted that the city OTB already had done a large amount of restructuring and made concessions that showed it was working in good faith to improve.

"Regional OTBs have their own problems," said Savino, "but they are not facing imminent disaster -- bankruptcy -- and they have not made the concessions the city OTB has. They have not made any concessions. This was not the time to address them. We could have done it next year, but now the entire system is in jeopardy."

Republicans fault Democrats for failing to negotiate, particularly since they did not have enough Democratic votes on hand to pass the bill alone.

"By insisting on a take-it-or-leave-it approach, Senate Democrats voted to close NYC OTB and put people out of work â€“â€“ plain and simple," said Republican spokesman Scot Reif. "Their bill was brought to the floor even though it didn’t have the votes and despite the fact we had offered a compromise bill that would have passed."

The Senate failed to vote on the OTB bailout when Paterson called them to a special session in late November. The Assembly passed the bill. Facing pressure to act the Democrats called the follow-up session last week. Several Democrats then missed the vote.

Senate President Malcolm Smith was in China, and Sen. Kevin Parker was on the way back from hearing the verdict in his felony assault trial. Sens. Ruben Diaz and Pedro Espada, who lost his bid for re-election, skipped the session. Sen. Liz Krueger was reportedly in the building but only willing to vote on the bill if her vote would put Democrats over the top.

"If the Senate Democrats want someone to blame, they should look in the mirror,"Reif said.

Democrats in turn say that Republicans who had agreed to vote for the bill backed out. The most striking example is Sen. Hugh Farley, whose district includes Saratoga, a town that benefits greatly from the racetrack there. Farley had even voted the bill out of committee and said he intended to vote yes. He explained that he was caught up in a conversation with Senate Minority Leader Dean Skelos and missed his name during the roll call vote.

Farley's absence proved crucial, according to Austin Shafran, spokesman for the Senate Democrats. "Had Farley kept his promise we could have delayed the vote procedurally," giving missing Democrats a chance to get to the Senate chamber and vote. Shafran said Parker, for example arrived half an hour later.

Savino said that Republicans could have indicated to her that Farley was delayed and she would have waited for him. But she thinks the Republicans really wanted to kill the bill. "This was them deciding that they wanted to manipulate this to their favor to benefit regional OTBs, and instead it failed," Savino said.

"There are 1,000 people out of work because of the cowardice of senate Republicans," Shafran continued. "Seventeen thousand New Yorkers could possibly be out of work statewide," Shafran said, if the OTB closure leads to the downfall of the racing system across the state.

Members of the state's racing industry do not actually support the Republican legislation. They were in favor of saving the city OTB and say that the Republican bill would have given the racing authority $11 million less in payments a year from regional OTB's on top of millions less from the city OTB. "The consequence of the legislation being advocated by the regional OTBs is that NYRA would be forced to close," Charles Hayward, president and CEO of NYRA, told The Saratogian.

Republicans, including Farley and Skelos, continue to insist that negotiations over a broader OTB rescue package continue, but Senate Democrats and Paterson’s office disagree.

"People have talked a lot lately about negotiations," said Savino. "Well, if anyone is negotiating they are negotiating with themselves, because Schwartz would have to reopen this, and so far I don’t think anyone is talking to him."

Paterson told a morning talk show host last week, "The reality is we’re not negotiating." Paterson spokeswoman Jessica Bassett confirmed on Monday that nothing has changed since then.