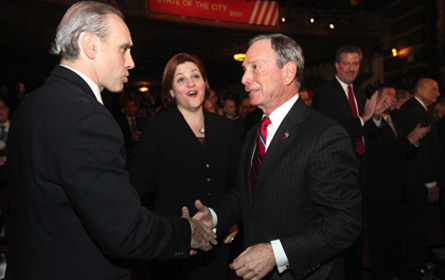 Mayor Michael Bloomberg fired off some of his feistiest rhetoric at the city's unions Wednesday during his annual State of the City speech -- adding one more voice to a growing national cacophony that targets the cost of pensions and perks in municipal labor forces.

Beneath the gold embossed ceiling of Staten Island's St. George Theatre, Bloomberg outlined a state legislative strategy to cut down on the city's escalating pension costs -- which have increased by more than 360 percent under his tenure.

"If all consumer prices had gone up at the same rate as the price of our pensions, the subway fare would be $7.05 this year and $8.39 next year for the same service we're getting now," said Bloomberg. "New Yorkers can't afford those subway fares, and we certainly can't afford pension costs on that level either."

Pension reform has been a staple on the mayor's fiscal agenda for years, but some of the particular pieces he unveiled Wednesday appeared for the first time, including doing away with holiday bonuses.

His tactic did not sit well with the city's unions.

"Mayor Bloomberg chose to take the low road in his State of the City address; attacking city workers and the modest $17,000 per year pensions they’ve acquired after making contributions during decades of dedicated service and sacrifice," said Lillian Roberts, the executive director of DC 37, the city's largest municipal union. "The city’s budget crisis is not the fault of municipal workers and their benefits. Rather, the fault lies with the massive fraud and recklessness of Wall Street and the loss of municipal revenue as the financial sector nearly collapsed in 2008-2009."

With the exception of the mayor's pension and labor proposals, his address was light on major public policy overhauls. New initiatives the mayor did announce were on the smaller scale -- such as forgiving health code fines if a restaurant received a grade A on its inspections.

All in all, Bloomberg used the address -- his tenth -- to tick off his accomplishments as mayor, including planned development projects, like Willets Point and Hunters Point Southx, and maintaining a balanced budget without so-called severe cuts. He did so as the city becomes more critical of the third term executive, whose recent blizzard blunders sent his approval rating in a tailspin.

"His approach sounded classic Michael Bloomberg, contentious, a little less respectful of the other players than I think he's going to have to be," said Public Advocate Bill de Blasio. "He's only going to get this done with the labor movement, with Albany."

Taking on Labor and Albany

Nothing sparked more ire than the mayor's proposal to curtail union benefits and power.

Specifically, the mayor proposed to raise the retirement age for new hires in non-uniformed employee unions to 65. He called for ending holiday bonuses, approximately $12,000 for uniformed employees, and for the consolidation of the city's pension systems, which would save $8 million in administrative costs.

He indicated he meant what he said.

"Today I will make this commitment: I will not sign a contract with salary increases unless they are accompanied by reforms in benefit packages that produce the savings we need to continue making investments in our future and protecting vital services," the mayor said.

To get it done -- the proposals will need approval from the State Legislature -- the mayor solicited former Mayor Ed Koch as his messenger. Koch has been on a crusade in Albany to get legislators to commit to independent redistricting reform. He will employ a similar strategy on pensions.

Comptroller John Liu refused to take a stance on the mayor's proposals yesterday, but he said all of the stakeholders should be at the table to discuss lowering costs.

Council Speaker Christine Quinn said it was "irresponsible" to take a position on the reforms, but said she is willing to consider every one.

Others praised the mayor's proposals.

"I thought it was great he made pension reform such an important part of his agenda," said Carol Kellermann, president of the Citizens Budget Commission. "No one ever brings up the Christmas bonuses except CBC."

Beyond pension benefits, the mayor also reiterated his call to do away with the last in, first out rule for city teachers. State law requires the last teachers to be hired to be the first to be laid off.

The mayor also called for capping the amount of time a teacher can stay in the reserve pool, which keeps educators on the payroll as they wait for a new position. Most teachers land on the list due to low enrollment or school closings.

Both of these proposals would need approval in Albany.

Neither of them, however, settled well with Michael Mulgrew, the president of the United Federation of Teachers.

Asked if he supported anything the mayor said on education on Wednesday, Mulgrew tersely retorted, "In terms of education, I support nothing, which he said today."

Despite his floundering poll numbers, Bloomberg's reception at the St. George Theatre was warm. The audience, which included approximately 700 attendees, applauded when the mayor touted his budget management record and gave Hizzoner a standing ovation as he exited and entered the theater.

Bloomberg promised he wouldn't raise taxes, but would instead deal with an approximately $2.4 billion budget deficit by shrinking the size of government.

In addition to the budget, Bloomberg said he would create community forums for New Yorkers to submit ideas on how to simplify government.

The event, which was more subdued than in previous years, still had some fanfare, including a welcome video message from a cartoon replica of Staten Island's Chuck -- the groundhog who bit the mayor's hand in 2009.

And, as always, the mayor tried to inject some humor into the afternoon.

"At no time has it been more important for us to put aside rivalries and focus on what's truly important: winning the big game," said Bloomberg. "Of course, I'm talking about the Jets winning the AFC Championship game on Sunday."