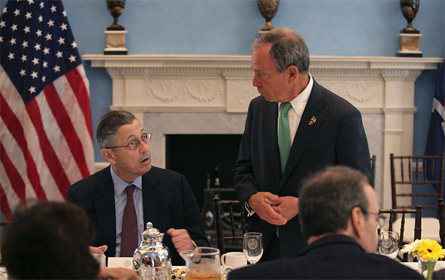 In his State of the City speech, Mayor Michael Bloomberg hoped to distract focus from his administration’s recent missteps by offering new initiatives. Whether or not that worked, the address earned Bloomberg the ire of unions and many of their members.

In his speech Bloomberg said he intends to do away with the requirement that the newest teachers will be the first laid off and to take away variable supplement fund payments (otherwise known as holiday bonuses) for uniformed city workers. Complaining that the city simply could no longer afford the cost of its pension, Bloomberg declared, "Today I will make this commitment. I will not sign a contract with salary increases unless they are accompanied by reforms in benefit packages that produce the savings we need to continue making investments in our future and protecting vital services."

The mayor, in his typically brash style, made his point and got his reaction, but as Bloomberg has learned before that doesn't mean he will get his way in Albany. If he wants that, legislators say, he will have to negotiate with the unions he has so angered.

The legislature has never been particularly kind to Bloomberg. He has had his victories -- winning and renewing mayoral control of schools, approval of Tier 5 pensions for teachers-- but he has also met with major defeats; congestion pricing and a bailout for the Metropolitan Transportation Authority are examples of the latter.

So what are the odds the mayor will get what he wants this time around?

A Tough Time for Unions

It certainly can't hurt that Gov. Andrew Cuomo -- the man with a 70 percent approval rating -- has made it his priority to get concessions from unions and harps on how union benefits drive up the state's $11 billion deficit. Cuomo issued a supportive statement after the State of the City.

"Mayor Bloomberg has laid out an innovative and realistic agenda to position his administration to aggressively address the critical challenges facing New Yorkers. He rightly recognizes that government has to do more with less and that during these difficult times, tough choices and sacrifice are required. I look forward to working with him to restore and revitalize the city's economy and put New Yorkers back to work," it said.

As Sen. Diane Savino puts it, "The mayor is getting a lot of help from Gov. Cuomo and the New York Post." He will also have the assistance of Mayor Ed Koch, who plans to use his group NY Uprising to lobby Albany for pension changes on the mayor's behalf.

The increasing tide of anti-union sentiment that is becoming quite popular also should bolster Bloomberg’s chances, as will the Republicans taking control of the Senate. In general, the GOP legislators favor reducing labor's influence of labor, and the party has received significant donations from Bloomberg. While Senate Republicans didn't do Bloomberg a lot of favors while they were the minority party -- they voted against a number of measures the mayor supported including microstamping for handguns and the MTA bailout -- But it seems likely that the labors issues are something Republican senators can get behind.

Senate Democrats may do what they can to block them. One, new Sen. Gustavo Rivera, said while he supports Bloomberg's comments on immigration during his speech, he didn't like what he heard regarding labor and pensions. "I wouldn't call what he was talking about pension reform. What I heard I would call pension erosion," Rivera said.

Rivera said that he thinks the approach by both Bloomberg and Cuomo is backward. "When we start by talking about cuts right away I think we have to stop and think about revenues. Like I said I am supportive of the mayor in a lot of his agenda but I didn't hear him talk about the financial divide in the city -- about pay equality," he said. "Wages for the middle class have been stagnant for a while and the rich keep getting richer."

Savino, one of four Democrats who have split from their party's Senate leadership and a former union organizer, said that while Democrats are traditionally more supportive of labor than Republicans, she doesn't think it will matter who is in the majority.

"Albany has been reluctant to get involved in the past when there isn't an agreement," Savino said. She thinks the mayor needs to do what he did to get Tier 5 approved for teachers last year: negotiate with the unions and make concessions.

And she thinks he might be able to do that. "I don't think unions are tone deaf," said Savino, "They are willing to negotiate."

If labor opposes one of Bloomberg's measures they will almost certainly be able to jam it up in the Assembly, where they the enjoy great support from Assembly Speaker Sheldon Silver. "The labor unions are very visible in Albany and they have a lot of sway in my conference," said Assemblyman and former City Councilmember David Weprin.

Weprin echoed Savino's sentiments, saying that, for the mayor's ideas to gain traction in the capital, there would need to be union support and good faith negotiations.

"I think we would be much more willing to accept something as long as there have been negotiations, but if we go into this with the unions opposed and an adversarial situation with the unions saying, â€This is unfair,’ I think the mayor will have a hard time getting what he wants from my conference," he said.

Rivera echoed the need for the mayor to talk with labor, saying said that he would not consider allowing the mayor to reduce pension benefits or giving him new negotiating rights without having Bloomberg come to an agreement with the unions. "If the unions reach a deal with the governor or the mayor then I would be supportive of that," he said, "but I think they need to start by negotiating because it was hard fought for working people to get these benefits in the first place."

Bloomberg tried to acknowledge that in his speech. I've always believed city workers deserve a safe and secure retirement," Bloomberg said, "but right now, they receive retirement benefits that are far more generous than those received by most workers in the private sector."

If Bloomberg needs union support to make his plans a reality, he may face a tough challenge. The reaction of union heads to the State of the City did not indicate that they are rushing to negotiate and make concessions to the mayor.

A number of union heads said that blaming unions for rising pension costs is unfair and it is Wall Street that should take the blame for mismanaging pensions "His friends on Wall Street created this problem, but the mayor won't join us in changing the law to let us sue to the people who lost the money," said United Federation of Teachers president Michael Mulgrew.

Mulgrew said he was "disgusted" with Bloomberg's reasoning for changing the first in last out provision, adding, "I have never heard a mayor say that people should be laid off on the basis of salary."

When asked if he supported anything the mayor said in his speech, Mulgrew said, "In terms of education, I support nothing, which he said today."

"The Variable Supplement Fund benefit -- what the mayor refers to as a holiday bonus -- was bought and paid for by New York City police officers, having been derived from a collective bargaining agreement that benefited both the city and our members," said Lynch in a statement. "Police officers gave over $75 million up front and in excess of a billion dollars of surplus pension earnings over the years to the city's coffers while a small portion was shared with our members in a defined benefit. Having realized billions in benefits, the city now wants to renege on the agreement. We intend to hold them to it."

If what legislators say is true, Bloomberg has a lot of work on his hands to mend fences and begin good faith negotiations with the unions -- otherwise his plans may be dead in the water.

"The mayor has said he wants to negotiate -- so I would suggest that he get out there and try to negotiate," said Savino. "He would have much easier time getting something through that way."