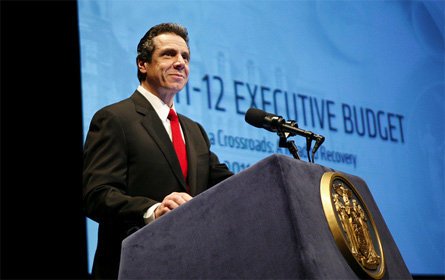 Photo by the office of Gov. Andrew Cuomo
In presenting his budget, Gov. Amdrew Cuomo urged legislators to stand up to lobbyists and cut spending.

The snow and sleet that began blanketing Albany on Tuesday at the start of a pair of major storms were well matched to the main theme of Gov. Andrew Cuomo's first budget address. It seemed like he was saying, "Albany is in a financial hell that is about to freeze over."

"New York is functionally bankrupt," he declared as the same words appeared on the screen behind him as part of his Power Point presentation.

Cuomo's address was nothing if not doom and gloom. Before introducing Cuomo, Lt. Gov. Robert Duffy told the crowd that New York's business climate ranks number 50 among all states, dead last. Warning that the state is "bleeding people and jobs," Duffy added, "All I can say is it stops today."

True to Cuomo's predictions, many groups did begin assailing the spending plans even before the governor had finished speaking. Health care and educations advocates, as well as those representing the poor, said Cuomo's budget, if enacted, would exact huge human costs -- particularly in New York City. While conceding the state needs to address its fiscal problems, many criticized Cuomo for not looking at ways to increase taxes and for his plan to do away with a tax on the wealthiest New Yorkers.

Many in the business community and even the Tea Party applauded Cuomo. However painful, some said New York needed to cut spending so the state could attract the businesses and jobs it needs to return to economic health.

Cutting the Increases -- and More

Cuomo's strategy in presenting the budget was clear. In addition to the warning of doomsday, he launched an attack on the state budget process, particularly on the formulas for education and Medicaid, which he said built in substantial spending increases year after year. While the governor's claim that this shocked him did not convince many, the issue did underscore his argument that the state could no longer afford those automatic spending increases and so would change its ways.

The governor's $132.9 billion budget would be the first budget in nearly a decade to actually reduce spending. It would reduce half of the projected $10 billion deficit by chopping $2.85 billion each in planned spending from both school aid and Medicaid.

The plan has few new revenue generators but does include $456 million in expected income from changes to gambling and gaming laws as well as better enforcement of tax laws. The customary $85 million in pork barrel money legislators get to dole out is gone from the budget. Cuomo claims he wants to completely do away with these projects. Not only would Cuomo let the tax on the wealthy expire but he wants a property tax cap. Critics say Cuomo is both cutting income and expenses, and the situation will become untenable for schools and other service providers.

All of this leaves the city facing major cuts; Cuomo proposes slashing $918.4 million in aid to the city. Half of that aid would have gone to schools. Funding to CUNY would be cut by by nearly $1 million.

Mayor Michael Bloomberg issued a statement sympathizing with Cuomo's budget troubles and agreeing with Cuomo's message of "shared sacrifice." But he said the city is being asked to bear an undue burden of cuts.

"Unfortunately, the budget does not treat New York City equitably; it eliminates 100 percent of New York City’s revenue sharing aid -- more than $300 million -- while cutting other localities by just 2 percent. The residents of our five counties pay a disproportionate amount of state taxes, and they deserve the same level of support," said Bloomberg in his statement.

Bloomberg also complained that the budget does not offer the city any relief on pensions, procurement, education and other issues. Bloomberg had, for example, wanted Cuomo, in the budget speech, to propose ending the requirement that the most recently hired teachers be laid off first. Cuomo did not mention that, or any of the changes in pension requirements Bloomberg wants.

In other areas, such as special education, the state expects the city to maintain the same level of services it has provided while drastically lowering the aid it contributes to help pay for them.

"We can’t only look at one side of the equation," said Bloomberg. "We need relief from unfunded state mandates, as well as changes in state law that would allow us to save money, particularly where we can find ways to save money that would not cost the state a dime. Without those changes, we will be looking at thousands of layoffs in our schools and across city agencies."

Bloomberg expressed hope that he still could get those changes. "This is just the beginning of the process," he said. "The governor will have another opportunity within 30 days to propose cost savings that will save thousands of city jobs and other reforms, and we look forward to working with him in the weeks ahead."

Other city officials focused more on the cuts themselves.

The City Council's Progressive Caucus released a statement warning the reductions could create "far more serious problems than the budget itself."

Council Finance Chair Domenic Recchia voiced some support for Cuomo's plan, but is concerned about what the cuts will mean to the city, particularly to its schools. "Our classrooms are already overcrowded and under funded," he said, "That being said, I believe this is a starting point."

Cuomo's education cuts were particularly stinging to some advocates because the state has not made good on court ordered school aid increases to underprivileged school districts.

"New York still has a two-tier public education system that does not provide adequate resources for our neediest students to receive a quality education," said Gerry Palast, executive director of the Campaign for Fiscal Equity.

Despite that, she said, the state has not come through on the funds for needy students and now wants to cut education spending. As a result, she said, "another generation of school children will see their education sacrificed again on the altar of fiscal discipline when tax cuts to the wealthiest New Yorkers are on the table."

Cuomo did not announce specific reductions to Medicaid spending, as a taskforce he created has until next month to come up with a plan for the reductions. But the health care lobby is not happy.

Health care providers and workers say that planned state spending increases to Medicaid were based on more people signing up for the health program for low-income people. The Greater New York Hospital Association and SEIU 1199 issued a joint statement saying, "If levied across the board, the cuts would be the staggering equivalent of a 10 percent decrease in Medicaid payments to hospitals, nursing homes, and home care." According to the statement, the cuts would trigger a loss of $3 billion in federal funds for health care in resulting in a total loss for New Yorkers of $5.9 billion in Medicaid funding."

Cuomo has created another task force, this one to deal with the issue of underutilized prisons and which ones to close. To make the plan more palatable to legislators from the rural upstate districts where most of the prisons are located, he announced that the state would provides a fund of $100 million to cities where prisons are closed to help with job losses.

The budget also calls for cutting almost 400 beds from the state's juvenile detention system. In addition, it includes a 49 percent cut in state reimbursements to localities that run their own juvenile detention facilities. Although Bloomberg did not address this in his statement, this could irk him as well. The mayor has pressed the state to allow localities to oversee their own programs; the cut in funding will likely make that more difficult.

Opposition to Cuomo's budget came swiftly, with critics charging that Cuomo is ignoring the human consequences of his proposed cuts.

A number of groups say Cuomo should renew the millionaire’s tax, which is set to expire, to lessen cuts to Medicaid and education.

"The only way New York can recover is to ask everyone to pay their fair share," said Robert Tolbert, a Bronx resident and board member of Voices of Community Activists and Leaders. "By not extending the millionaire's tax, Gov. Cuomo is giving up one of the best tools we have to fix our state's long-term revenue crisis." Tolbert accused the governor of protecting real estate, financial and other corporate interests -- despite his "rhetoric of shared sacrifice."

"The budget reflects policy choices. Cuomo is asking lawmakers to put the needs of Wall Street and the wealthy ahead of the needs of our students, the poor and the middle class," said Mark Dunlea of Hunger Action New York.

The New York State Tea Party is particularly fond of the plan; they issued a statement on Monday calling for all New Yorker's to back the plan.

But the most supportive statements came pouring in from the business community.

Heather Briccetti of the Business Council of New York State said, "Gov. Cuomo is proposing a budget that finally addresses the need to reduce government spending and put New York on the road to recovery. This budget proposal ends the business as usual in Albany that has led to a loss of jobs and population in our state."

The Partnership for New York agreed: "The executive budget released today by Gov. Cuomo is true to his campaign promises. He has made the tough choices that will insure that New York State once again can lead the nation in job creation and business investment. He has challenged Albany's tax and spend habits, reversing a pattern that has made New York unaffordable for residents and businesses alike."

The battle lines seem pretty clearly drawn. The New York Senate, led by Republicans and with the four Democrats who broke from the Democratic conference to form the Independent Democratic Caucus, will probably support much of the proposed budget, with the backing of the business community.

The Assembly, led by Speaker Sheldon Silver, is likely to fight to restore cuts, with the support of labor, health care and education interests. Meanwhile, Bloomberg and his staff will be lobbying Silver, who is from Manhattan, and the Senate Republicans, who have received significant donations from Bloomberg.