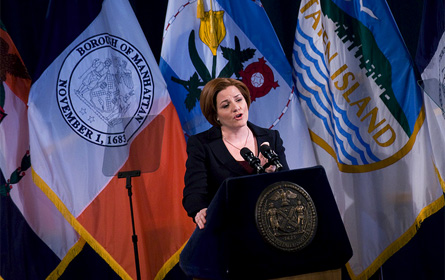 Setting herself apart from other 2013 mayoral contenders and with the current occupant of City Hall, Council Speaker Christine Quinn proposed cracking down on wasteful contracts and city debt in her sixth State of the City address Tuesday.

Before a crowd of at least 500 at the City University of New York's Graduate Center, the speaker hinted at what promises to be a likely 2013 mayoral campaign platform focused on problems both "big and small" -- from avoiding skyrocketing debt to making sure residents do not get unfair parking tickets.

In what could be her most ambitious and challenging proposal, Quinn suggested the city start paying for some of its capital expenditures -- normally financed through issuing bonds -- with cash up front. The process, which has been done before on a smaller scale during Bloomberg's tenure, would reduce the amount of debt while also ensuring the city invests in its infrastructure and creates jobs, Quinn said.

"Under my pay as you go proposal, we can keep these New Yorkers hard at work, while still reducing the debt we leave for future generations," said Quinn, while perched on raised stage with the flags from the five boroughs behind her.

According to a council spokesperson, Quinn hopes to kick off the program in 2013 with a $200 million up front payment for projects. The allocation would increase by $200 million every year thereafter, eventually rising to $1 billion, said the spokesperson.

Quinn's position puts her at odds with Mayor Michael Bloomberg's proposal to trim debt service by simply cutting the capital budget by 20 percent, which he ordered in December.

Quinn said yesterday: "That kind of across the board cut comes with serious consequences -- and I simply cannot support it."

In response to Quinn's proposal, Marc LaVorgna, a Bloomberg spokesperson, said in an e-mailed statement: "We understand the speaker’s position and agree that we need to reduce debt service costs. We work closely with the speaker and council, producing on-time, balanced and responsible budgets every year, and we will be discussing this as a part of the budget process."

The mayor is scheduled to release his preliminary budget on Thursday.

Getting Control of the Budget

In 2003, the city spent $2.4 billion on debt service to cover capital costs. It is projected to spend nearly $5.1 billion this fiscal year. Costs will climb to nearly $6.7 billion by fiscal year 2014.

According to budget experts, paying for capital projects up front would also provide a buffer if the economy heads south again. The practice, said Ronnie Lowenstein, the head of the city's Independent Budget Office, is not unusual. But some question whether it is fiscally and politically feasible.

"This is nothing you would want to do in a downturn," said Lowenstein. "The question is are we enough out of the downturn to do it?"

The city faces a $2.4 billion deficit in the upcoming fiscal year. Paying for capital projects up front would force the city to cut back even more on programs.

The capital budget was not the only fiscal proposal Quinn touted.

Thrusting in the air a 1,500-page contract to clean up snow around bus shelters, the speaker said the city spends more than $10 billion each year on "contractual services." To make sure that money is spent appropriately, Quinn said the council would approve legislation to create a new Web site that would detail financial information in plain language on all of the city's 17,000 contracts. She also said keeping contract costs flat in the next budget year would save the city $100 million.

"I'm happy to hear the speaker talk about the need to rein in out of control contracts," said Comptroller John Liu, who has been criticizing bloated contracts for years. "It's something that the mayor doesn't even talk about."

Liu is another potential mayoral candidate in 2013.

Like the mayor, Quinn also called for pension reform in her address. She said unions and officials have to come to the table to negotiate. Quinn, however, did not offer specific proposals.

Quinn got her start in politics as a housing advocate. In her speech Tuesday, it seemed like she was getting back to her roots.

In addition to the capital budget and contract proposals, Quinn honed in on affordable housing, calling for the repeal of vacancy decontrol in Albany -- a stance she has made clear before.

Quinn said she would streamline the application process for affordable housing by creating one online application. Currently, residents have to apply for an apartment via snail mail developer by developer. Partnering with New York University's Furman Center, the speaker said the council would for the first time track affordable apartments on the brink of going market rate. Knowing where they are and working with advocates in tandem could help keep these units affordable, said Quinn.

Quinn received the loudest round of applause when she said the council would approve a package of legislation to make parking regulations fairer. Part of the proposal would prohibit traffic agents from issuing a ticket if a driver is walking to a muni-meter. Quinn also said the council would reduce the amount of alternate side parking for streets that have had clean ratings for more than two years.

By taking up politically sensitive issues like affordable housing and alternate side parking, some observers said Quinn doesn't have 2011 in mind, but 2013.

'"It speaks to a constituency she needs to run for mayor," said Democratic political consultant Hank Sheinkopf of the speaker's address. "She has to impress outer borough people that she’s serious about this. â€¦ The things she is talking about are post-Bloomberg."