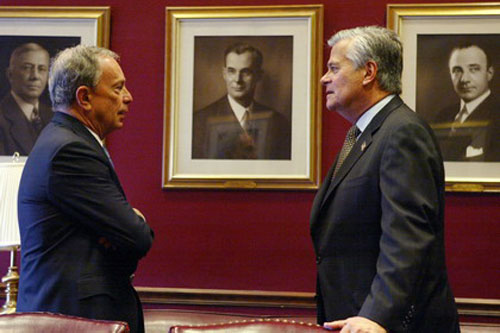 On Wednesday, hordes of protestors poured into the New York State Capitol in Albany chanting, "Hey ho, hey ho, these budget cuts have got to go!"

Simultaneously, legislators worked to pass the $132.5 billion fiscal plan -- most ignored the chanting as much as they could.

But it wasn't just the protesters who weren't being listened to.

Mayor Michael Bloomberg stamped his feet and gnashed his teeth about how the state budget hurts New York City. It wasn't enough to shake the will of the Cuomo administration. The newly minted governor convinced legislators to vote for almost the exact same budget the governor presented to them -- except for a few small restorations. All told, it looks like the city lost just under a half billion dollars in education aid.

Expecting cuts, Bloomberg didn't do the traditional lobbying in Albany. Rather than focusing on restorations, he pushed Albany to reduce state mandates and give the city more flexibility in negotiating public contracts.

Unfortunately for Bloomberg, and some would say the city, he didn't get any of it.

Bloomberg's biggest request was for the state to do away with "last in, first out," or LIFO. Rescinding the policy would allow the city to lay off teachers based on performance, not seniority. He made his case in Albany during budget hearings, as did Schools Chancellor Cathie Black. The issue was pressed in editorial pages and through like minded legislators in the Capitol, but in the end Bloomberg struck out; LIFO is not part of the budget agreement.

There is a possibility that Senate Republicans and the governor will continue to work with Bloomberg to reach a deal on LIFO after the budget is voted on, but at the moment it just seems that Bloomberg's agenda utterly failed.

Bloomberg's other gripe was a cut out of millions of dollars in revenue sharing funds that the state gives to localities every year. New York City sends more money to the state than any other locality, yet for the past two years the state has proposed eliminating the local aid. The Cuomo administration argues it didn't zero out those funds -- the cut was made in budget extenders last year under Gov. David Paterson. Cuomo just didn't go out of his way to restore aid to the city. New York City was singled out by Albany and eliminated from the revenue sharing program, while other localities took no more than a three percent cut.

"We appreciate that some of the cuts in education aid were restored. But make no mistake: the final budget still cuts New York City more than ever before," Bloomberg wrote in a statement. "The restorations are merely a fraction of the $600 million necessary to avoid additional layoffs and cuts in the city's budget -- beyond what was announced in February -- for the upcoming fiscal year."

Cuomo's spokesman, Josh Vlasto, blasted Bloomberg, saying the budget "restores tens of millions of dollars in additional education aid, millions to keep senior centers open and millions to protect the homeless. AIM aid to the city was not cut 100 percent. AIM aid was eliminated last year, so it is a zero percent decrease for fiscal year 2011-2012. Prudent budgeting would not have counted that as an increase. In addition, the City Department of Education has a surplus of over $300 million and the City revenue position has improved, so they have much less pressure on their overall budget."

Bloomberg, however, sent out a mailer blaming Albany for cuts and painting himself as a champion for the working class. His literature read: "Albany budget cuts will hurt our families. That's why Mike Bloomberg is standing up for us." The flyer also says that Bloomberg is "protecting vital services like police and fire that keep our neighborhoods safe."

In response to the flyer, Councilmember Jimmy Oddo asked Bloomberg in a letter if his planned cuts to fire stations still stood. "Respectfully, I ask that the appropriate individual within your administration publicly state whether the aforementioned direct mail piece does, in fact, signal a change in administration policy eliminating the threat of closing any fire companies as part of the FY 2012 budget."

The council's progressive caucus made it clear that they think Bloomberg has been fighting the wrong battles in Albany. Rather than pushing for changes to last in, first out and other labor concessions, they say Bloomberg should have been focused on restoring cuts to education and Medicaid funding and joined them in calling for the renewal of the state's millionaire’s tax.

Since the state budget does not reauthorize the millionaire’s tax, the progressive caucus is calling on Bloomberg to support the creation of one on the city level. The odds of accomplishing that are extremely low; Bloomberg hasn't even supported the state version.

"We urge Mayor Bloomberg to keep the millionaire’s tax for New York City. If Albany won’t look out for the over 1.8 million New Yorkers who live below the poverty line, the one-third of city residents who rely on Medicaid, the 17,000 children who stand to lose daycare, and the one out of every four working New Yorkers who rely on food stamps -- then we must," wrote the Progressive Caucus in a statement.

Another major way the city lost out in the budget talks, according to a number of Democratic legislators, is rent regulations were not renewed as part of the package. The laws are set to expire in June. Cuomo and Senate Republicans have close ties to the real estate lobby that opposes stronger laws for tenants. At one point in negotiations it seemed that a deal might be made to include a property tax cap along with a renewal of the rent laws, but that fell apart.

Meanwhile good government groups, including Citizens Union, the sister organization to Gotham Gazette's publisher, are decrying the fact that the budget continues funding for the Legislative Task Force on Demographic Research and Reapportionment -- the group of legislators that decides district lines. Groups such as NY Uprising and Citizens Union have been pushing for legislators to pass independent redistricting to prevent gerrymandering. A majority of legislators pledged to support the move, but by continuing to fund the old system, it becomes less likely a new one will be instated before the redistricting process begins.

The Senate finished passing bills late on Wednesday night. The Assembly was still working past midnight--meaning Cuomo did not get an early budget, but likely one that will be on time.