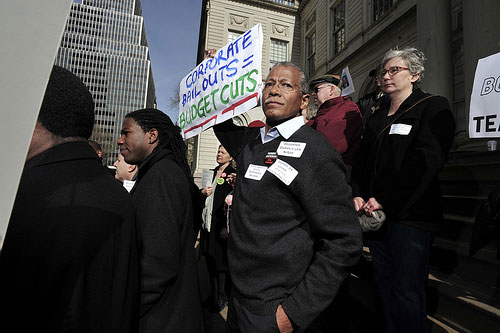 City Comptroller John Liu strode into the spacious fifth floor conference room in the municipal building last week to hold his first impromptu press conference as the steward of the city's finances.

"I think its safe to say there just hasn’t been enough oversight for the better part of a decade," said Liu.

That same morning, Manhattan Borough President Scott Stringer stood in front of the municipal building and blasted the Bloomberg administration for its so-called bloated education contracts.

"With all of this increase -- over millions of millions of dollars -- they cannot cut back one dollar, that's absurd," Stringer said, standing next to the head of the teachers union. "Every contract should be evaluated. The problem is the process is so opaque."

The recent contract scandals have brought renewed attention to the city's contract budget -- which has grown by more than 70 percent during Mayor Michael Bloomberg's tenure. Nowhere has that increase been more evident than in the budget's professional services or consulting area -- which blew up from $357 million in fiscal year 2003 to nearly $1.5 billion in the proposed budget for fiscal year 2012 budget.

Those increases have caught the attention of Bloomberg's potential successors. A central focus of Council Speaker Christine Quinn's State of the City speech early this year was city contracting. Other prospective mayoral candidates, like Liu and Stringer, are now also calling for culling contracts.

While the administration has more recently been receptive to cutting back, officials balk at any across-the-board cut or substantial decrease. The debate is pitting the council speaker against the three-term mayor -- a rare occurrence -- as the two attempt to negotiate a budget deal before the June 30 deadline.

The amount the city pays for those services -- which cover everything from social services to computer consultants -- has skyrocketed well above the rate of inflation.

City officials, particularly Quinn, can't seem to figure out why.

"There are a lot of unanswered questions," Quinn said in a phone interview this week. "What's the $290 million of data processing equipment?" Quinn asked referring to a one portion of the contract budget outlined in the mayor's executive budget proposal.

"I am not saying that every dollar of that $290 million is unnecessary," the speaker continued. "Maybe it is necessary. â€¦ let's just not assume it is without drilling down."

The contract issue has become a key point in this year's budget negotiations. As the city faces laying off thousands of teachers and closing fire companies and swimming pools, officials at the council, particularly Quinn, question why the administration insists on keeping outside consultants.

Between the 2012 preliminary budget proposal, released in February, and the executive budget, released in May, the contract budget grew by $110 million, according to council officials.

During a hearing on the education budget on Wednesday, Councilmember Robert Jackson criticized consultant contracts in the Department of Education. He questioned why the city would consider laying off more than 4,100 teachers, while it continues to contract out funds for professional development.

Quinn said she has no exact goal for how much she wants to reduce the contract budget this year. The speaker has said just holding spending flat on contracts in fiscal year 2012 would save $100 million.

But the administration disagrees. Bloomberg Spokesperson Marc LaVorgna contends the city cannot amend contracts until they expire. He said it would be impossible to hold spending flat.

Ultimately, she added, "I believe every single city contract can be broken."

LaVorgna said the city is making some strides in reducing the size of the contract budget -- specifically in technology consultants. The city used to hire outside consultants for quality assurance to oversee technology contracts. They started to hire project managers at the Department of Information Technology and Telecommunications to replace those outside consultants. By creating staff positions, the city will save $37 million, according to the administration.

These proposals, LaVorgna said, are part of a larger attempt to find contract savings.

But, LaVorgna wrote in an email, "There will still be needs for highly specialized, outside technical expertise of course."

Based on the numbers, it looks like New York may have a greater "need" than other big cities.

Sitting in the union's Barclay Street office, Henry Garrido, the union's associate director, said consultant contracts are negotiated in cycles, with one individual bouncing from department to department. They are paid by the hour, costing the city thousands more than if they had been on staff, Garrido said.

Scandal aside, there is so little oversight of some of these projects, Garrido said, they can end up costing the city more than double what it had originally projected.

"[There is] the overutilization of contract consultants on the one hand that have exorbitant prices," Garrido said. "In other areas, it's just change orders."

Critics of DC 37's efforts are quick to suggest Garrido may just be trying to save his members' jobs. Garrido doesn't dispute this. He argues the consultants should be put on staff, which would allow them to become union members.

"Forget the union," Garrido said. "If you think it's in the best interest of the city, make a cost comparison."

DC 37 isn't the only union using this tactic this budget season. The United Federation of Teachers, which faces the largest employee loss, is also blasting the administration for consultant contracts in the Department of Education.

Standing alongside Manhattan Borough President Stringer last week, the head of the teachers union, Mike Mulgrew, said city funds should be used in the classroom not for consultants.

"There is something wrong here," said Mulgrew. "The parents in this city, the children in the schools, the teachers are sick and tired of every week hearing about another scandal with outside contractors and consultants making millions of dollars that should be used in the classroom for direct services to students -- not lining the pockets of privateers who are trying to use children to make money."

Should the latest budget deal include a reduction of contract services, it is likely Liu, Quinn and Stringer will all claim some sort of victory -- a win that could easily be spun to saving jobs during the next campaign season.

Ultimately, trying to cut contracts now, may be less about a budget crisis and more about the mayor's race.

"There are real fiscal issues and there are fiscal issues as political issues," said Doug Muzzio, a professor at Baruch College. "Clearly this administration is rich in contracts, or made other people rich through contracts. Clearly there are questions about the efficacy of many of those contracts."