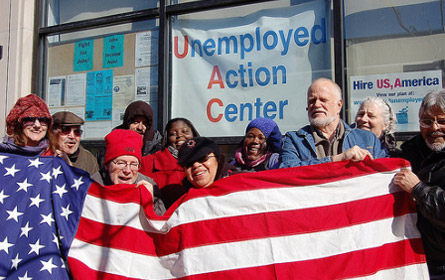 The package of job creation and stimulus measures proposed by President Barack Obama last week is welcome medicine for an ailing economy. If adopted, the president's plan will boost job growth and help reduce unemployment that has stayed high despite the fact that the Great Recession of 2008-09 was deemed to have come to an end in June 2009. The president's plan is an important step in the right direction, particularly after a summer of political preoccupation with the long-term federal budget deficit, and it is likely the most that can be done given the current makeup of the Congress.

The effects of that crisis are being deeply felt in New York. Twenty-six months into the "recovery," over 600,000, or one in every seven, New York City workers is unemployed, under-employed or has given up looking for work. While there has been improvement in some economic indicators for the city, job growth has been too weak to put a meaningful dent in the continuing unemployment. The city's overall under-employment rate tops 15 percent, for blacks it's 22 percent, for young black men it's 40 percent.

The reported decline in the unemployment rate -- which includes only people actively looking for work -- is deceptive. People who would like to work but have given up on finding a job in this labor market are no longer counted as unemployed. If these discouraged workers were counted, New York City's unemployment rate in July 2011 would have been 10.1 percent, about 1.5 percentage points higher than the official 8.7 percent unemployment rate for that month.

These and other indicators of the continuing "unemployment crisis" in the city and state are documented in the latest edition of The State of Working New York. Long-term unemployment, the report finds, is at record levels for the nation and for New York. Half of those unemployed in New York City and elsewhere around the state have been out of work for more than six months, and 29 percent have been jobless for a year or more.

A great deal of political energy has focused on the federal budget deficit, but the deficit that matters most for many New Yorkers is the "jobs deficit." To bring New York state's unemployment rate back to where it was before the recession, New York would need 512,000 additional jobs today.

Hundreds of thousands of New York families are struggling to make ends meet and to keep a roof over their heads. Worker skills are eroding, and the likelihood that tens of thousands of long-term unemployed workers will never productively re-enter the work force increases with every passing month. Our economy is squandering the productive labor of unemployed men and women on a colossal scale, and our homegrown small businesses that depend on local sales are put in jeopardy because the unemployment crisis deprives them -- even more than other businesses --of customers with money in their pockets.

This is the weakest recovery from a recession since the 1930s. Following other recessions since World War II, the real Gross Domestic Product (GDP) grew an average of 5.4 percent in each of the first two years of the recovery. In the two years of this recovery, annual GDP growth has been less than half the average, only 2.5 percent per year. The housing collapse, consumer demand dampened by unemployment, and state and local government budget cuts all contribute to this record weakness.

New York lost fewer net jobs in the 42-month period from the start of the national recession in December 2007 through July 2011 than 40 other states around the country. This is largely because the housing bubble of 2003-to-2007 bypassed upstate New York and the unprecedented taxpayer bailout of the finance sector saved several of the largest New York-based banks and securities firms from catastrophe.

Yet this "good news" has done little to help most New Yorkers. The state has seen its employment rate -- the ratio of those holding a job to all working age people -- continue to decline during the recovery, dropping from 57.3 percent at the end of 2009 to 56.9 percent in the first half of 2011.

New York state has re-gained 118,000 of the 316,000 payroll jobs lost during the recession, or 37 percent. Fourteen of the 18 major sectors of the state's economy lost jobs during the recession, but only two (other services and management of companies) have completely made up recession losses. The two sectors that lost the most jobs -- manufacturing and construction -- continued to lose jobs, but at a much slower pace through June 2011.

In the first half of 2010, New York City had gained jobs faster than the nation, but since then the city's job growth has been about the same as for the nation overall.

Government is the only sector that has lost more jobs during the recovery than during the recession. Over the past three years, New York has lost 54,000 jobs for teachers and other state and local public servants. That is a greater decline than in any other sector except for manufacturing, with government seeing more jobs lost than finance and insurance, or construction. It is expected that New York's schools opened this fall with 12,000 fewer teachers and other staff than they had last spring.

The problems in the city and state reflect those in the nation as a whole. In the last three or four months, job growth and other economic indicators have slowed so much that more and more economists are talking about the risk of a "double dip recession." It is in this context that the president correctly shifted his focus at the end of summer from the federal budget deficit to the national jobs deficit.

The president's $447 billion American Jobs Act proposal includes a range of measures to increase consumer spending, re-hire public school teachers, expand infrastructure investments, and provide tax cuts to businesses to spur hiring. Some of it continues current programs that expire at the end of this year, like federally funded extended unemployment benefits. Others enhance remedies currently in place like Obama's proposal to up the individual payroll tax cut from 2 percent to 3.2 percent. (See the box below for the main components.) 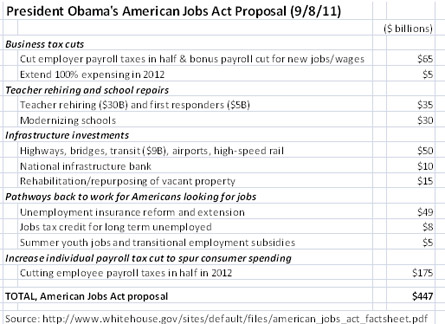 The proposed American Jobs Act is a little more than half the size of the American Recovery and Reinvestment Act (ARRA), the $787 billion stimulus legislation crafted by Obama's presidential transition team and House Democrats and passed by Congress in February 2009, with not a single House Republican voting in favor.

With the House Democrats' loss of their majority in the 2010 midterm elections, the united opposition of the House Republicans is now a real impediment to the making of coherent economic policy. The jobs act, for example, includes far less money than the recovery act to provide relief to state and local government budgets, and proportionately relies far more on tax cuts. The $35 billion proposed in the jobs act for state and local governments to re-hire teachers and first responders will help to reduce the negative impact that state and local job cuts are having on the recovery. The current bill, though, does not include an increase in the federal Medicaid share that was the main form of state fiscal relief in the recovery act.

In another important difference, well over half -- 57 percent -- of the jobs act funding takes the form of tax cuts; in the recovery act, tax cuts accounted for about 37 percent of the total. Even though most economists believe that direct spending provides more economic stimulus bang for the buck than do tax cuts, the president has likely crafted a package heavy on tax cuts to try to win Republican support.

Mark Zandi of Moody's Analytics and an economic advisor to 2008 Republican presidential nominee John McCain, has written that, if enacted, the Obama jobs plan can add 1.9 million jobs and 2 percentage points to GDP growth next year. While Zandi thinks this would keep the economy from sliding back into recession, it would only cut the unemployment rate by one percentage point.

Of course, passage of the act is by no means certain. Zandi and conservative economist Doug Holtz-Eakin believe that key parts of the jobs proposal like the payroll tax cuts, the unemployment insurance extension and some of the infrastructure proposals may garner enough Republican votes to pass. There is also the possibility that conservative interests will refuse to support any meaningful part of the jobs act based on a cynical political perspective that their electoral success in 2012 depends on keeping unemployment high.

What New York Can Do

New York cannot escape the adverse effects of the extremely weak national economy. Whether or not the major elements of the American Jobs Act are enacted, New York policy-makers can do several things to boost jobs and the state's economic future:

If New York cuts state income taxes on the wealthiest by $5 billion in 2012 as it is set to do, it will have to make budget cuts that will further damage the precarious recovery and exacerbate the unemployment crisis. Keeping New York's current income-tax surcharge on high-end taxpayers after it is set to lapse in 2012 would make a huge difference in staving off job cuts for state and local government employees, including school teachers and educational support staff. Greater reliance on a progressive state personal income tax, an expanded circuit breaker to provide property tax relief, and closing corporate tax loopholes will benefit all New Yorkers with a more evenly shared tax burden.

Unemployment insurance benefits have been a lifesaver for tens of thousands of New York families during and following the economic downturn. Yet, the state's unemployment system has not been updated in over a decade and has fallen behind nearly every other state in the extent to which it replaces lost wages. New York’s average weekly unemployment benefit of $304 replaces only 26 percent of the average weekly wage, putting New York in 48th place compared to other states.

New York should link its economic policies to raising wage levels so that workers can start to bridge the wage-productivity gap and provide a modest boost to consumer spending and job growth. New York could raise the state minimum wage in stages to restore the purchasing power of its low-wage residents. The wage now currently is worth 26 percent less than it was in 1970. Eighteen states and the District of Columbia have minimum wages higher than New York’s $7.25 minimum. For its part, New York City could expand its living wage ordinance to companies receiving significant city economic development assistance.

Taken together, these measures represent important steps to increase jobs and begin to counter the substantial income disparities that have built up in New York and elsewhere in the U.S. over the past 30 years.

James Parrott is deputy director and chief economist of the Fiscal Policy Institute (www.fiscalpolicy.org). He has been studying and writing about the New York economy for over a quarter century.