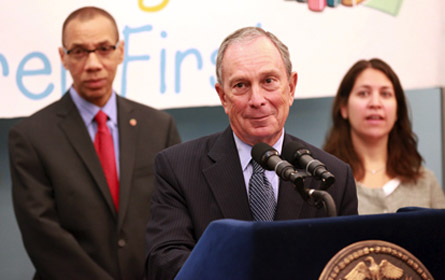 Photos by Spencer T. Tucker
In August, Mayor Michael Bloomberg, shown here with Schools Chancellor Dennis Walcott, announced private philanthropists -- including himself -- would pick up the tab for the January 2012 Regents tests.

In the face of extreme budget cuts and tough times, Mayor Michael Bloomberg recently has turned to private donations to fill some high-profile budget holes. Last month, Bloomberg announced that six private donors -- himself included-- would each donate $250,000 to reinstate a round of state standardized testing that had been eliminated because of budget cuts.

"For thousands of our students, taking the Regents exams in January will mean the difference between graduating and not graduating," Bloomberg said at the time. "I've always believed that you can either complain about your problems or do something to fix them -- in New York City, we choose the latter."

In this high-profile use of outside funding to provide a core service in the public schools, many education experts see more than just a last-minute save.

"From a systemic point of view, this is a very worrisome pattern in New York and around the country,” said Michael Rebell the executive director of the Campaign for Educational Equity at Teachers College, Columbia University. Rebell, who critiqued the decision in a New York Times op-ed last month that lambasted states for leaving public schools in New York and around the country without adequate funding.

Private money in the public service doesn't stop at education. Increasingly, donations fund all sorts of programs -- parks, social welfare initiatives and museums, to name a few. While some praise the philanthropy, others question the lack of funding by government and the increased influence these often-unnamed donors may have on policy and decision-making.

In his announcement, Mayor Bloomberg emphasized the importance of a long-term solution for funding the January Regents, as the donations will only cover the 2012 tests.

Rebell says the one year reprieve from budget cuts could hurt prospect for solving the schools’ funding issues in the long-term. Private donations like this alleviate pressure points, but they don’t fix the problem, Rebell said.

"It takes the attention and the pressure off the need for adequate public funding of public education," he said. If the donors had not stepped in, he added, "People might have been up in arms when they saw graduation rates go down."

From a government standpoint, the funding also poses a risk, said Charles Brecher, the executive vice president and director of research for the Citizens Budget Commission, a government watchdog group. "What do you do if it disappears? What if that money goes away?" he asked.

Brecher, who is also a professor at New York University's Wagner School of Public Service, published a study in 2007 that tracked how private donations leverage public funding to the parks.

Many parks have non-profits, such as the Prospect Park Alliance, that augment their park's public funds. Donations to the nonprofits are usually given with a stipulation that public funding will be maintained to certain levels, allowing donors to use their philanthropic muscle to preserve public funding -- even in times of budgetary crisis. Brecher said this often leaves "parks without Fifth Avenue and Central Park West as neighbors" with less public funding and comparatively limited funds.

"It's always good to have extra resources," Brecher said, but "it's best done when it doesn't distort what otherwise would have been done with the public money."

In many cases, the private funds influence use of public funds as well. Officials see a donor giving money to cover 80 percent of the cost of a new skating rink, say, and then ante up the remaining 20 percent, even if that money might have ben better spent on a playground. In education, some critics have charged that school districts like New York City's have embraced smaller, themed high schools, not because they are necessarily a good idea but because funders such as the Gates Foundation have poured so much money into them. Gates himself has expressed disappointment in the result

Last month, Bloomberg announced a $30 million donation from his own foundation -- and a matching one from hedge fund manager George Soros -- to fund a new initiative aimed at young black and Latino men.

The city added $22.5 million dollars in public funding for the program to the City Council budget at the last minute, as well, alarming many City Council members who complained that they hadn’t been alerted to the change in the budget or included in the discussion.

Queens Councilmember Peter Vallone Jr. now is looking into possible legislation that would prevent such late in the game additions to the budget.

"I have no problems with private money for public programs," Vallone said, "but I'd just voted on a budget without more police officers, and we were on the cusp of closing firehouses. Yet after the budget was passed, there was an announcement for a program that had millions of dollars and no public oversight at all," he said.

Bloomberg's announcement came less than a week after the council approved its budget. "If Bloomberg was able to find that money, then we should have been able to direct it to more police officers if we saw fit," Vallone said.

Brecher said the funding for the initiative exemplifies how private donations affect the city's allocation of public funds. "In this instance, it probably did affect the priority setting process," he said.

The $22.5 million addition was included in the final, printed $66 billion budget that was given to City Council members, but Vallone said it is "impossible to be aware of last minute additions in a massive document like that."

Marc LaVorgna, a spokesman for the mayor, said that while the initiative's public funding was added at the end of the budget process, "the council was notified that we were seeking to add dollars for this program into the budget and the program was printed in the budget."

He said that the presence of the private money in the deal had "zero to do with" the public funding of the program, adding that "the City Council changes literally hundreds of millions of dollars in the budget at the 11th hour every single year."

The Poor Get Poorer

Private donations often leave those in poorer areas with even fewer resources than they might have otherwise had.

In public schools, parent teacher associations have long been sources of private funds. When services are cut, fundraisers and private donations fill out the budget. But in poorer areas, where donors are scarce, the services remain un-funded and can face cuts.

This inequality is "totally inconsistent with any concept of [public] schools," and often unconstitutional, Rebell said. (Most state constitutions have a provision that guarantees an education, though exactly what that means in practice is often debated.)

The private funding also has an effect because upper or middle-class parents --the people at "the forefront of political advocacy" â€“ then are not affected by cuts and so are less likely to complain about them, Rebell said. The people who are hurt -- those in low-income communities -- are less able to make their concerns known. If more affluent parents have "found a way to satisfy their needs, it’s not going to come to the floor," Rebell said. "Its well-known that low-income people don't have the articulation or organization skills to protest it themselves."

Vallone, however, would rather have the money donated than not.

"We’re not living in John Lennon's imaginary world," he said. "We're living in a world where very few people would donate if their kids wouldn’t see the results."