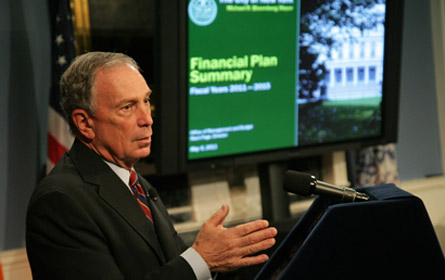 Photo by Edward Reed
In May, Mayor Michael Bloomberg announced a budget that relied almost exclusively on cuts to erase a budget gap. With more red ink on the horizon, will he do the same this year?

If it's September, it must be time for Mayor Michael Bloomberg and his budget office to start cutting spending by city agencies. The current, fiscal 2012 budget that was adopted less than three months ago projects a $4.6 billion deficit for the next fiscal year. A year ago, facing a much smaller projected deficit for the next year -- $3.7 billion -- the mayor began a series of cutbacks that eventually reduced spending by $1.1 billion.

If there was any doubt about fiscal prospects, recent reports from the state Financial Control Board, the state comptroller and the city comptroller dispel them. These grim reports from fiscal monitors and recent studies from the Independent Budget Office, however, also suggest some new ways the mayor could fill budget gaps.

The key reality facing the mayor is that, unlike in recent years, there is no sign that the city will have a substantial budget surplus at the end of this year. Without something like last year’s $3.7 billion surplus, and with deficits averaging $4.8 billion over the next three years, the city's fiscal future looks "problematic" to the Financial Control Board and "challenging" to the state comptroller. Put a bit more dramatically, the board says, "The city's ability to avoid contentious expenditure reductions will be tested."

Expenditures and Other Fiscal Uncertainties

Over the last three years, the mayor has shown a certain political genius in avoiding "contentious" responses to his 10 packages of budget reductions. To accomplish this, he has very effectively used his extraordinary discretionary powers to make modifying the city budget a year-round -- rather than once-a-year -- process, with little opposition from the City Council.

The impact of 10 consecutive reductions is equally extraordinary. The State Financial Control Board totaled the effects: The $1.1 billion cut in 2011 was preceded by cuts of $1 billion introduced in fiscal year 2008, $2.1 billion in 2009, and $1.1 billion in 2010. Add them together and that means that the current $66 billion city budget is $5.3 billion smaller than it would otherwise be.

The fiscal monitors are not in the business of telling the city how to balance its budget, but they do a good job of explaining how the mayor balances the budget and at noting the fiscal uncertainties the city faces. The uncertainties include questions about projected out-year budget deficits, collective bargaining, pension costs, workforce cuts and the use of reserve funds.

In explaining why the city faces an ominous budget outlook, the state comptroller analyzes what actual revenues come in during a fiscal year and what actual spending occurs during that year. For instance, in spite of the cuts of more than $3 billion introduced in 2008 and 2009, "spending exceeded current-year resources by about $2.4 billion in FY 2009 and $2.1 billion in FY 2010." Those budgets were balanced only by using surpluses accumulated from previous years.

In FY 2011 the report estimates that, because of unanticipated revenues from an improving economy, current-year spending exceeded current-year revenues by only $303 million. The report goes on to say, "For FY 2012, however, we project a current-year deficit of $4.4 billion, reflecting the city's heavy reliance on nonrecurring resources accumulated in prior years to balance the budget."

The Financial Control Board suggests what the mayor should do next: "The task for the city will be to manage the FY 2012 budget in a way to start to build a surplus to the level achieved in FY 2011." In other words, the mayor should continue the same early-year and mid-year budget cutting he has made into a near science.

The Unknowns of Collective Bargaining

But there are many other uncertainties this year, including contract negotiations with city workers. The mayor's current three-year wage freeze, for instance, has freed up labor reserve funds for balancing the current budget.

The question is how long the mayor can keep the freeze on. According to the state comptroller's report, more than 90 percent of the city workforce is working without a collective bargaining contract. And the adopted budget includes funding for only a 1.25 percent annual wage increase for three years following the expiration of the three-year wage freeze.

Since the three-year freeze and proposed minimal raises for the following three years are still being negotiated, the state comptroller points out, "If instead wages were to rise at the projected inflation rate during the six-year period without any offsetting savings, costs would increase by $1.5 billion in FY 2012, $1.6 billion in FY 2013 and reach $2.7 billion in FY 2015."

The teacher's negotiations present more uncertainty. The state comptroller notes that the city "has yet to conclude an agreement with the United Federation of Teachers for the previous round of bargaining." That means that in FY 2009 and 2010, while other civilian employees received 4 percent annual increases, the teachers had no increase. Instead, the labor reserve funds for teachers again went to budget balancing.

Negotiations between the teachers union and the city, with the help of a mediator, continue, but a settlement apparently is not imminent. The state comptroller concludes, "A retroactive agreement similar to those negotiated by the city's other unions for those years would increase costs by $1.7 billion in FY 2012 and by $900 million annually thereafter."

Another uncertainty is the projected cost of city pensions. Costs have increased dramatically beginning in fiscal 2003 after the "state enhanced benefits, and pension fund investments fell short of expectations," according to the state comptroller. The city currently estimates pension costs, which averaged about $1.4 billion a year in the 1990s, will be $8.4 billion in fiscal 2012, increasing to $8.7 billion in 2015.

In anticipation, the city in its four-year financial plan set aside $1 billion a year in a reserve fund. But it's not clear it will need that fund this year.. Nor, on the other hand, is it clear $1 billion will be enough.

To balance budgets recently, Bloomberg has tapped into the Retiree Health Benefits Trust Fund -- to the tune of $672 million in the current budget. The fund was set up by the mayor several years ago to set aside money for the city to cover its accrued liability for future post-employment retiree benefits, including health benefits. That liability, according to the state comptroller, reached $75 billion as of fiscal 2010. (The city has been paying these benefits on a pay-as-you-go basis.)

The Financial Control Board agrees: "It is unfortunate that the city has continued to reduce the trust over the last two fiscal years to cover investment losses incurred in prior years while [post-employment benefit] liability continues to grow at a constant high rate."

Yet this fund, which now holds about $2 billion, remains a tempting resource for an administration reluctant to find new and recurring tax revenues and that regularly uses ad hoc, non-recurring revenues for budget balancing.

Cutting the size of the city workforce has also helped balance the budget. The fiscal 2012 executive budget in May reduced staffing by more than 9,000 positions. However, the City Council reversed some of those cuts. The state comptroller estimates that the final budget eliminates 5,475 slots in fiscal 2012, including 2,655 positions in the Department of Education.

Originally, the mayor wanted to eliminate 6,166 schools jobs, including 4,166 teachers. But the negotiated restoration of 4,666 education jobs should not mask the loss for the school system. Many of the restored positions, for instance, are funded for only one year.

The state comptroller notes that in fiscal 2012 the schools will have 7,000 fewer teachers than in fiscal 2009, and another 1,200 fewer in fiscal 2013. The effect? "Class sizes are expected to continue to rise, and other services, such as after-school programs, may be reduced," his report says.

The fiscal monitors also touch on some management areas where potential savings could help budget balancing. One is the rapidly growing contracting budget, which emerged as a point of contention during last spring's budget talks. The state comptroller notes the "heightened scrutiny because of the increasing amounts spent on [contracted] services, and instances of waste and fraud." This, of course, is undoubtedly a reference to the scandal surrounding the City Time contract, which continues to unfold.

Spending on contractual services rose by nearly 75 percent between fiscal 2001 and fiscal 2010. It then totaled $10.6 billion, or 16.3 percent of the 2010 budget. According to the state comptroller, the 2012 budget is slightly less -- $10.5 billion for contractual services -- although that could grow as the city receives federal and state grants later in the year.

The city could also save some money by reducing overtime costs, now over $1 billion a year. Uniformed agency overtime alone, including civilian personnel, reached $963 million in fiscal 2011, according to the Financial Control Board. That's $240 million more than the city projected at the beginning of the fiscal year.

The board says the current four-year financial plan "grossly underestimated" future overtime costs. The city comptroller estimates the city's overtime projection for fiscal 2012 is $210 million less than it will ultimately be. If he is correct, the city would have to fund the extra costs during the fiscal year, adding yet another uncertainty to mid-year budget balancing.

As the mayor begins his mid-year -- or earlier -- modifications in the current budget to meet next year’s $4.6 billion deficit, there is no indication he is willing to address tax revenues. But as the reality of yet another $1 billion to $2 billion mid-year cut in agency services unfolds, it might be time to do just that.

The Independent Budget Office's Budget Options is an excellent source of practical expenditure-saving and tax-revenue programs. One of the more familiar ones is a restoration of higher personal income rates for joint tax filers with incomes above $200,000. New top rates of 4.013 percent and 4.264 percent (affecting only 7.8 percent of city resident tax filers) would still be much lower than the top rates in effect from calendar 2003 through 2005 and most of the 1990s, yet produce an additional $450 million in fiscal 2012.

In a recent web blog the budget office noted that the city's biggest tax, the property tax, will bring in $17.6 billion in fiscal 2012, about 42 percent of city tax revenue. But it would generate $13.5 billion more were it not for "the slew of [property] tax exemptions."

Most of these exemptions, of course, go to government property and religious property, and so are untouchable.

Some exemptions, however, could be challenged. Perhaps the most outrageous case is Madison Square Garden, which has not paid any property tax for decades, costing the city $15.1 million in lost revenue in this year alone. The Independent Budget Office points out that a case can also be made that some private institutions -- health facilities, foundations, charitable organizations, and private schools, colleges and universities -- could negotiate voluntary payments (called payments in lieu of property taxes, or PILOTs). Many do that in other cities.

In other words, the mayor need not simply announce yet another autumn round of agency downsizing and lost services. He has a chance to address alternative strategies that could minimize such cuts: Management reforms and a willingness to find new, equitable tax revenues would be good places to start.â€¨

â€¨ Glenn Pasanen, who has taught political science at Lehman College, has been in charge of Gotham Gazette's finance topic page since 2001.