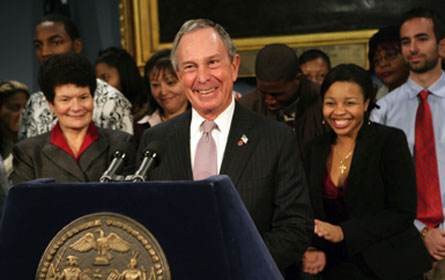 Photo by Spencer Tucker, New York City Mayor's Office
Mayor Michael Bloomberg celebrated the work of his Center for Economic Opportunity in 2007, but in the years since poverty in New York has increased.

What is the city's response? Budget cuts. Less than two weeks after â€¨the U.S. Census Bureau reported that the city's poverty rate jumped to â€¨20.1 percent in calendar year 2010, Mayor Michael Bloomberg's budget â€¨director demanded that all city agencies, including education and uniformed â€¨services, immediately plan to cut 2 percent for the remaining eight months of this fiscal year and 6 percent next year.

Yet a series of reports make it clear that even without the latest round of cuts, poverty agencies -- facing rising need and falling resources -- â€¨cannot maintain services.â€¨ In fact, the Mayor's Management Report for fiscal year 2011, released in mid-September and not generally known for highlighting â€¨bad news is â€¨full of bad news. A companion report from the mayor's Office of â€¨Contract Services and a new Independent Budget Office fiscal brief on children's servicesprovide further evidence that the agencies can't meet their stated goals.

But the mayor in his own press release for the management report ignored all that saying simply: "The data show that city agencies continue to provide the high-quality services that New Yorkers have rightly come to expect."

The U.S. Census report in September not only noted the overall poverty â€¨rate rising to 20.1 percent in 2010, up from 18.7 percent in 2009, but that the rate for families with children headed by single mothers â€¨in New York City reached 41.1 percent last year, up from 38.8 percent in 2009. The mayor responded: "When the economy slows down, there are fewer jobs. â€¦ People pay less, tip less, whatever. That certainly filters all the way down." But he added, "The city has one of the strongest safety nets in the country."

The safety net in some agencies, though, looks torn.

TheAdministration for Children's Services itself notes in the Mayor's Management Report that â€¨there was a 20.2 percent decline in children in at-risk families receiving contract â€¨preventive services in 2011, â€¨compared to 2010 (down from 29,945 children served to 23,881). The â€¨decline, Children's Services reports, was "due to continuing pressures on preventive services."

The new fiscal brief from the Independent Budget Office paints a larger picture of what has happened at Children's Services. Between 2000 and 2011 the agency shifted its emphasis from placing children in foster care to providing preventive â€¨services and therefore minimizing foster care placements. The shift â€¨"contributed to a 54 percent reduction in the number of children in â€¨foster care and a 28 percent increase in the number of children receiving preventive services while remaining in their homes," the â€¨report says.

Then came the recent budget cuts. "Because spending on â€¨preventive programs is discretionary, these services compete with other programs for scarce city dollars," the budget office explained. â€¨This has led to a 25 percent reduction in the number of children receiving services over the last two years.

The cuts are counter-productive in fiscal terms. A family preventive â€¨services slot, according to Children's Services, costs an average of $10,000. On the â€¨other hand, "the average cost of keeping a child in foster care â€¨averaged $49,000 in 2010," the budget office notes.

The report goes on to explain the problems that providers face -- and will face in the future -- as budget pressures make funding uncertain. For instance, in early 2010, the mayor wanted to eliminate 3,000 preventive care slots. The City Council â€¨restored funding for 2,900 slots, but for only one year, fiscal 2011. Then in May 2011, the mayor continued funding for those 2,900 slots for the current 2012 fiscal year "and provided enhanced funding for â€¨2012 and later years." Yet, the brief continues, "significant risks" remain "as long as the â€¨majority of preventive services are considered discretionary by the â€¨state."

The strain appears within the offices of agencies dealing with low-income New Yorkers. Ten years into the Bloomberg administration, the Human Resources Administration blames delays in registering its $606 million human-services contract -- only 62 percent were sent to the city comptroller on time, vs. 97 percent on time in 2008 -- on the "implementation of multiple new automated tracking â€¨and management systems," a lot of contracts with similar start datesâ€¨and the "implementation of new business procedures."

Average lateness in registering contracts in these agencies "increased â€¨to 41 days in fiscal 2011 compared to 27 days in fiscal 2010." One result: Cash-flow loans from a city fund for human-service contractors who start or continue services in spite of not having a registered contract jumped from $29 million to $43 million in the past year.

Who Funds the Safety Netâ€¨

The Mayor's Management Report also shows that whatever strength the city's safety net retains stems primarily not from the city, but â€¨from federal and state funding and mandates. For instance, the number â€¨of New Yorkers receiving city-administered cash assistance from the Human Resource Administration's basic assistance program has actually fallen by 1.4 percent since 2007, from 360,700 to 355,600 in â€¨2011.

At the same time, the enrollment numbers in the federal food stamp and â€¨Medicaid programs have grown dramatically. From 2007 to 2011 the â€¨number of New Yorkers receiving food stamps (funded by the federal â€¨government) has grown by 67 percent, from 1.1 million to 1.8 â€¨million. The city administers the program and has received an award for â€¨its role in expanding food stamp enrollments.

The number of New Yorkers enrolled in public â€¨health insurance programs, including Medicaid, (funded by city, state, and federal â€¨governments) has grown by 14 percent, from 2.56 â€¨million to 2.91 million.

Yet the Mayor's Management Report shows that overall city, state and â€¨federal spending on social services has remained essentially flat for the â€¨past three years, ranging from $8.3 billion in 2009, $8.5 billion in â€¨2010, to $8.1 billion in 2011 (numbers not adjusted for inflation).â€¨

Budget Cuts and the Schools

The Department of Education differs from several of the human service agencies because of its nearly $2 billion increase in spending over â€¨the past three years. Its budget now totals over $19 billion in a $66 billion city budget. Despite that, â€¨problems are obvious even in the good-news Mayors Management Report.

School class size increased in grades kindergarten through eight by an average of 1.6 â€¨students per class. In the crucial early elementary grades, average â€¨class size rose by 2.2 students.

As scaling back in the city's capital budget has slowed school construction, the number of new class seats has dropped in just one year, from 18,525 in â€¨2010 to 3,684 in 2011. The percentage of elementary and middle school students in schools that exceed capacity increased to 24 â€¨percent in fiscal 2010, up from 20 percent in 2008. (Many 2011 results are not yet available.) Thirty one percent of elementary schools â€¨exceeded capacity in 2010, up from 26 percent in 2008.

The department's convoluted management of student â€¨achievement data in the Mayors Management Report makes it difficult if not impossible to â€¨judge the educational impacts of the past three years of cuts. From 2008 to â€¨2010 the four-year high school graduation rate improved from 56.4 percent to 61.0 percent, and the rate for students with disabilities â€¨improved from 22.5 percent to 27.9 percent.â€¨But from 2008 to 2011 the percent of students in grades three to eight â€¨meeting or exceeding standards in English language arts declined from â€¨57.6 percent to 43.9 percent. In math the percent declined from 74.3 â€¨percent to 57.3 percent.

The department blames the achievement declines in grades three to eight on changes in state's method for scoring standardized tests, but achievement indicators crafted by the department itself also show â€¨declines. For instance, the percentage of schools receiving As or Bs â€¨on the department's own "School Progress Reports" dropped from 79.0 â€¨percent in 2008 to 62.3 percent in 2010.

In another department-created indicator, the percent of schools with "Well Developed or Proficient on â€¨Quality Reviews" dropped from 94.7 percent to 84.1 percent between 2010 and 2011. The â€¨management report explains, "This change reflects a higher standard of â€¨school performance for schools to meet â€¦ to ensure all schools are â€¨ready for the increased challenge of the Common Core Learning â€¨Standards."

The city recently laid off some 672 school aides, but mayoral threats to lay off teachers have been abandoned. It should be noted, however, that through resignations and attrition, school staffing from 2008 to 2011 fell by 6,059 or 4.3 â€¨percent. This decisions by the mayor and his school chancellors to not fill these vacant position is of course the main reason for increasing class size.

The round of budget cuts now underway could prove to be much more challenging to agencies and service beneficiaries and could faceâ€¨more challenges from the City Council and New Yorkers. Put simply, the two city management reports and the Independent Budget Office's report on one human service agency together suggest that city agencies are stressed and that poor New Yorkers are not getting the level of services they did three or more years ago.

The new tack in the budget-cutting directive -- demanding across the â€¨board cuts, with no exceptions -- is especially troubling. The evidence in these reports is that the cuts are already disproportionate. School kids, children at risk, working mothers, poor seniors -- they are the ones experiencing reduced services.

As two earlier public finance columns illustrated, the Bloomberg administration's efforts on poverty issues have been limited â€¨to pilot programs and a push for private, philanthropic action. These new reports suggest that this is not a time for promoting and administering charity but for taking a hard look at the public policies and â€¨ programs that are losing any battle against poverty in New York â€¨City.â€¨

Glenn Pasanen, who has taught political science at Lehman College, has been in charge of Gotham Gazette's finance topic page since 2001.