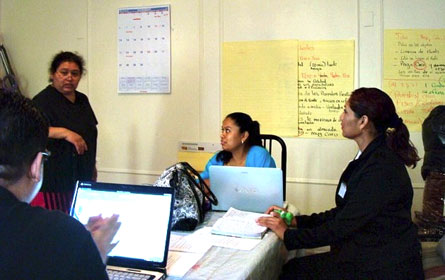 In 2006, Teresa Perez and 14 other immigrant women began meeting at the Center for Family Life in Sunset Park to launch an employee-owned housecleaning business. Together, they called it SĂ­ Se Puede. The name was a nod to immigration reform protests then popping up across the country but in Brooklyn, it doubled as a sales pitch to flush homeowners in neighboring Park Slope: We Can Do It!

Within four years, SĂ­ Se Puede’s worker-owners, many of whom did not speak fluent English, tripled their wages to as much as $25-an-hour. Last year's open house to recruit new members drew over 90 applications for 13 spots. The company, now with 37 worker-owners, has grossed $1.6 million.

In an October speech widely reported as a balancing act between business interests and the then-ascendant Occupy Wall Street movement, Quinn, a likely mayoral candidate in 2013, pledged funding to the Center for Family Life to incubate three new worker cooperatives per year in low-income neighborhoods. It is welcome support; there are fewer than 20 such co-ops in the city.

Organizers say there should be more. Worker coops, they maintain, create living wage jobs and, in partnership with food, housing and credit union cooperatives, have the potential to transform high-poverty neighborhoods.

For that to happen, though, significant barriers, not least, access to capital, must be overcome. Lack of information is another huge problem, says attorney Ted De Barbieri, who advocates for community development organizations through the Urban Justice Center. Supporters readily admit the average straphanger does not have a clue about what a worker cooperative is or how it functions, much less that employee-ownership can raise wages.

What is certain at this nascent stage is that worker cooperatives transform owners' lives.

"I was able to grow my ambition," Perez said through a translator. "Before, I'd say I can't study but now I say, 'I would like to go to school.' Now, I think of things like that."

The most well-known cooperative in New York City is probably the Park Slope Food Coop. It is the largest of its kind in the nation, and by co-founder and general manager, Joe Holtz’s estimate, people join for a sense of community as much as for the cheapest organic tomatoes in the five boroughs.

Worker coops, which started organizing through the NYC Network of Worker Cooperatives in 2009, are slightly different. Economic and social justice motivates many of their owners.

In the south Bronx, Green Worker Cooperatives creates jobs, "as a response to high unemployment and decades of environmental racism." In Brooklyn and Queens, former day laborers formed Apple Eco-Friendly Cleaning to escape buyer whims at la parada, a decade-old, all-weather corner at the intersection of Marcy and Division where women line up for work every day. Take the Brooklyn-Queens Expressway farther south and factory workers fed up with standing eight-hours-a-day, are meeting weekly to create Golden Steps, which specializes in non-medical elder care.

“These are the new generation of worker coops," said Vanessa Bransburg, coop coordinator at the Center for Family Life. "Even if you don’t know how to write you can join."

From California to Maine, over the last 15 years low-wage workers have steadily organized employee-owned small businesses. The trend counters a common perception that coops are products of middle-class enclaves like Park Slope.

If labor exploitation initially pushes workers into forming coops, those that stay do so because of an intense commitment to the welfare of the group. It is this orientation toward consensus, not profit that distinguishes the worker coop model from traditional businesses. Along the way, worker-owners discover and develop an enviable set of skills, not least, patience and conflict resolution.

"It's very difficult to get along with 20 to 30 people, each one having different opinions," SĂ­ Se Puede vice president Catalina Rodriguez said through a translator. "You have to be very open."

Listening and a willingness to compromise, as well as the courage to enforce established rules, benefit Rodriguez. Before forming SĂ­ Se Puede, Rodriguez earned $8 an hour to clean homes. Invariably however, homeowners also expected her to care for children and prepare meals, and Rodriguez was in no position to object. She received no pay for overtime. Now, she said, "I manage my own time and for four to five hours of cleaning, I earn up to $120."

After a year in operation, the owners of Apple Eco-Friendly Cleaning earn more money than could be had for the few hours they would work after long waits at la parade. But getting there and the time demands -- six months of twice daily meetings for about five hours --whittled down interest from 20 women to the current five who often meet in the Jackson Heights living room-bedroom-office of member, Luz Maria Arias. It is a strong reminder: Worker coops are not easy.

"Not everyone wants to become an entrepreneur or face the responsibility of being an owner," said day labor organizer Ligia Guallpa. She cautions against well-meaning nonprofits inserting bodies into pre-packaged companies and industries. Instead, the impetus should come from the workers. During Guallpa's weekly support meeting for women working at la parada, some of them asked for her help in forming the company.

Excluding the salaries of Bransburg and Guallpa, neither SĂ­ Se Puede nor Apple Eco-Friendly Cleaning required much up-front funding. Members pooled their money to get the little that they did need.

But for many if not most worker-coops, access to capital has been a persistent issue -- and one that limits coops to come-as-you-are sectors like cleaning or childcare.

Most banks do not recognize the coop model. Even if they did, "service-industry workers typically don't have the wealth or assets that banks traditionally look to for collateral," said Carmen Huertas-Noble, an associate professor at CUNY School of Law and founding director of its community and economic development clinic.

As a result, worker cooperatives typically attach to community-based nonprofits. Others also seek funding from local credit unions or the National Consumer Cooperative Bank based in Washington, D.C.

Other funding sources may be emerging, though. In addition to Quinn’s $150,000 pledge, the United Nations recently launched a global campaign declaring 2012 the year of the cooperative. And in December, U.S. Rep Chaka Fattah of Pennsylvania will introduce a bill to help grow coops nationwide.

At the neighborhood level, SĂ­ Se Puede and Apple Eco-Friendly Cleaning are encountering a new challenge: competition. SĂ­ Se Puede has experience but Apple’s owners mix their own non-toxic cleaners, a competitive advantage that opens another exciting prospect for 50-year-old Arias.

"Maybe we’ll become millionaires by making products and not cleaning!" she said in Spanish, to laughter from her four co-owners. They are huddled around their other office, a four-top in Starbucks.

"Look, dreaming doesn’t cost anything," Arias says, with a deep shrug. "This is America."

Carla Murphy is a freelance journalist and graduate of the CUNY journalism school.