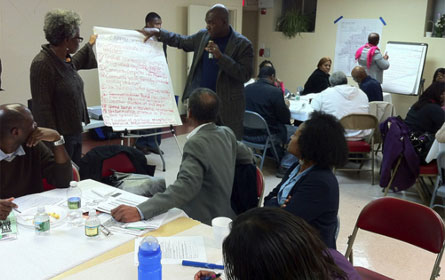 Photo by Daniel Latorre
Residents of Councilmember Jumaane Williams' district in Flatbush met in October to review ideas about how he should spend his discretionary funding.

From the Occupy protestors to millions expressing disgust with debt ceiling debacle, many American are angry about how the government spends money,. something most of them have little control over outside the polling booth. Now, four New York City Council members are trying to change this and give residents a direct say in where the funding goes, at least on a local level.

"I walk down my street every day, wishing I could do something about the conditions," said Ali Abdul Rahman, a resident of Brooklyn’s 39th district, who is getting the opportunity to do some budget . "Well, now there is."

Under the plan, resident volunteers take ideas from residents of their community and work with their council member to come up with a budget plan for capital projects. This will affect only the pot of money -- often castigated as pork -- that members get to allocate to their communities as they see fit. It will not apply to expense items, just money for new building or equipment or improvements to facilities. And so far only four of 51 council member are participating: Brad Lander of District 39, Jumaane Williams of District 45 in Brooklyn, Eric Ulrich of District 32 and Melissa Mark-Viverito of District 8.

Most districts will allocate about a million dollars to the project though the exact amount of available discretionary will be determined by the council speaker, in the spring. Districts can usually count on several million each, some of which is already allocated to ongoing projects.

The participatory plan faces the challenge of involving the community and educating people about how budgeting works. However, proponents of the program say that participatory budgeting enhances democracy on a local level, improves the relationship between elected officials and their constituents, educates the public about local government processes and can boost the popularity of elected officials.

Participatory budgeting originally started in the Brazilian town of Porto Allegre 20 years ago. It then spread through much of Latin America, Europe and elsewhere, according to Josh Lerner of the Participatory Budgeting Project, a nonprofit organization, which tries to advance the practice in new areas. He said that the program exists in over 1,000 cities worldwide, in one form or another.

New York is only the second place in the United States to try participatory budgeting after Chicago's 49th Ward represented by Alderman Joe Moore. The program was very popular there, according to Betsy Vandercook, Moore's chief of staff.

It already is gaining ground among New Yorkers. "This is definitely the most popular thing we've done," said Alex Moore, Lander’s chief of staff.

Listening to the Public

The process involves many steps -- and many meetings. first, the elected officials reach out to their constituents and invite them to large town hall meetings that anybody from the district can attend. There, residents get together into groups and brainstorm ideas on how to improve the district and take care of the most glaring flaws.

Suggestions range from practical ones like fixing sidewalks and improving trash collection to outlandish ones like buying a gondola for the Gowanus Canal or winterizing a playground by putting it under a science fiction style retractable, transparent dome.

Around 100 community members then volunteer to be delegates and do the research needed to assemble these suggestions into feasible proposals. These delegates work together to weed out the totally unworkable plans, while grouping the workable ideas into categories, with the help of the council member's staff. The delegates then split into groups based on their area of interest, such as public health, safety and sanitation.

The delegates in each subgroup will then meet between five and ten times before March 2012. They also will need to spend some of their free time researching the city's many rules and regulations to understand what each project requires. Because they have a finite budget, delegates are encouraged to look for ways to get the most out for the least amount of money.

By spring, the committees will have selected their favorite ideas and, together with the council member, fleshed them out enough to go on a ballot. The elected officials will then gather their constituents' ideas and hold a district-wide vote where the public chooses which projects will get priority. This will allow the discretionary budget to be spent according to the will of the residents.

Everyone in the district 18 years of age or older can vote, regardless of whether he or she is a registered voter or a citizen living in the district. (People can serve as delegates when they are 16 or 17.)

"I had no knowledge [of the process] before, this is why I got involved, I see flaws and they don’t get fixed," said Rahman. "But I started to understand bureaucracy and why it takes so long."

A Lesson in Government

As they work through the process, residents come to appreciate just how difficult it is to make a working budget. At a 39th district environmental delegates' meeting, the group discussed ways to improve trash pickup and recycling, keeping in mind what the Department of Sanitation is and is not authorized to do, and adhere to the rules on what discretionary spending and capital money can and can't buy. This is hardly a trivial task for people with limited bureaucratic experience, many of whom have full-time jobs.

Participatory budgeting also requires extra effort on the part of council staff as they supervise the delegates and try to make sure all members of the community have the opportunity to participate. In Chicago, Vandercook said that the first year saw a disproportionate number of college-educated and white participants. The alderman’s staff has since improved its outreach, using word of mouth, online social networking and other tactics, so that people from a wider range of economic and ethnic groups have gotten involved.

In New York, the diversity of the participants may depend on the individual community. "The thing about our district is that it's extremely gerrymandered and diverse," said Trina Hickey from District 39. "So we get a good mix of people."

"A big part is community development," added Lerner. “Groups which ordinarily never work together, now do."

Proponents also say that participatory budgeting brings people closer to their elected officials. After three years of the program, Alderman Joe Moore has become "hugely" popular among participating residents, according to Vandercook, and his election victory margin rose significantly. Lerner said that in Brazil, mayors who instituted participatory budgeting were about 10 percent more likely to get re-elected than those who did not.

Alex Moore said that because the program is brand new, the council members expect to make mistakes. Each district will make adjustments so that the process better fits its needs. But overall, many participating residents are excited about the project and the transparency it can bring.

"We're not used to looking at other countries for ideas about democracy," said Lerner. "We think we know best, what can we possibly learn from Brazil? We should pay closer attention."