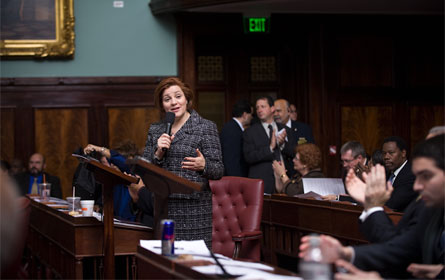 Photo by William Alatriste
The City Council voted unanimously yesterday to override a mayoral veto in a rare rebuke to Bloomberg.

The City Council voted unanimously yesterday to override a mayoral veto of the Outsourcing Accountability Act today — taking a stand against outsourcing and the mayor, too.

The bill, dubbed a “no-brainer” by Councilmembers, aims to save the city money and keep contracts with city workers. It was passed unanimously in October by the Council , but the Mayor vetoed it last month saying that it keeps the city from getting the best deal for their money.

“The bill asks, â€can the service be provided more cheaply by city workers?’” Council Speaker Christine Quinn said during the stated meeting. “If the answer is yes, why would we possibly contract it out?”

The bill 624-A will require the City to perform cost benefit analyses for some outsourcing contracts, give public notice of planned service contracts to allow for more competition and bidding, and if possible at a cheaper rate, award the contracts to city employees.

The vote continues the Council’s departure from their ordinarily cooperative relationship with the Mayor, which was kicked off last week when Quinn announced that the Council would sue the Bloomberg administration over a policy requiring people to prove their homeless status before receiving shelter.

Quinn, who is leading this move, is a likely mayoral candidate in the upcoming election; Bloomberg has seen as approval ratings slip as his third term drags to a close.

The city has come under fire this fall for a lack of oversight in city contracts, leading to fraud and hiked prices. The Department of Education was overcharged by at least 6.5 million by an outside firm, the city’s special commissioner of investigation recently found. And who can forget the notorious CityTime, a payroll system which was supposed to prevent fraud, but ended up costing the city $760 million dollars and leading to a federal criminal investigation?

The Bloomberg administration has argued that private contractors can deliver services more cheaply than city workers, though Quinn is quick to note that the bill increases oversight, it doesn’t stop the city from hiring private companies if indeed the service comes cheaper.

When he vetoed the bill, Bloomberg said that adding such an oversight process creates inefficiency and red tape. “My administration has sought to work with the Council to strike the proper balance between accountability and efficiency in the City’s procurement process,” the Mayor wrote in a statement. “Unfortunately, this bill goes further than past efforts and crosses from the questionable to the clearly unwise and impermissible.”

Bloomberg has also questioned such a bill’s constitutionality, which may bring the whole matter to court, though a mayoral spokesman wouldn’t comment on that yesterday.

The vote was among the first legislation passed in the recently renovated Council Chamber, which has been upgraded and preserved as part of a larger $119 million dollar City Hall renovation.

“The roofs are no longer falling in,” Council Speaker Christine Quinn said with a laugh inside the Council Committee chamber, where she recalled plaster had fallen from the ceiling during Committee meetings earlier this spring.

The Council used a temporary gathering space in the Emigrant Savings Bank Building for the past five months.

The Council Chamber itself, amongst other upgrades, has refinished and polished wood paneling and new curtains (which lack the binder clips Quinn said had held them before — “Nothing says dignified government like a binder clip,” she said with a laugh.) The building is also being brought up to code, extending an elevator to the third floor to make it handicap accessible, and installing a sprinkler system. It is the first significant construction of City Hall in more than a half-century; renovations are expected to be complete by 2012, in time for the building’s 200th anniversary.

“Speaking of Greenâ€¦” Quinn quipped, referring to the new green paint in Council offices below the Chamber, the city will be getting â€greener’ thanks to several pieces of legislation passed in today’s stated meeting — notably, the Council approved the first Energy Neutral school. The school, which will be built on Staten Island in the Rossville/Woodrow section, will have 444 seats and will open in 2015.

Three other code additions will also keep the city from polluting its water, land, and air: the first prohibits water used to rinse concrete off equipment at construction sights from being disposed in the sewer system; the second will increase the use of recycled asphalt, and the third requires additional filters in heating and air conditioning systems in new buildings.