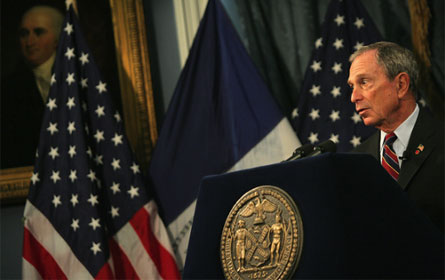 More city budget cuts are up for discussion, but the end of the chopping block is far from near.

In an attempt to close a projected $2 billion budget gap, Mayor Michael Bloomberg proposed another round of cuts last month, cutting hundreds of jobs by attrition and lay-offs. Among the hardest hit will be the Departments of Sanitation, Cultural Affairs and Health and Mental Hygiene.

These sorts of cuts are the "new norm" for the city budget, Citizens Budget Commission’s Senior Research Associate, Maria Doulis explained. “Things are looking really grim for the next year or year and a half.”

Layoffs, Doulis said, have been "a last resort" over the years, particularly in departments that provide core services, but the city has exhausted typical saving strategies like renegotiating contracts, "so now we're going towards real service cuts," she said.

And what’s more, Doulis predicts that before a 2013 budget is adopted this summer, the Mayor will announce another round of budget cuts.

Last year’s midyear budget cuts focused on cutting capital spending, with Mayor Bloomberg asking for a 20 percent cut in spending for construction and maintenance of city-owned buildings and infrastructure, but now, Doulis says the city is running out of ways to find savings and income.

The city had hoped to find $1 billion in revenue from the Mayor’s taxi medallion plan that would allow livery cabs to legally pick up street hails in the underserved outer boroughs and northern Manhattan. The Governor, who has expressed concerns about the bill from the start, has said he won’t sign the bill with its current compromising amendments. As of yet, he hasn’t outlined the changes he wants made to the bill. A statement from the Governor’s office on Tuesday said that “outstanding issues are handicap accessibility of livery cabs, the transferability of and market for livery permits, livery and yellow cab pickups at airports, lack of financial incentives to purchase handicap accessible licenses, and concerns regarding the effectiveness of Taxi and Limousine Commission enforcement.”

The statement also announced a Wednesday summit aims to finalize some sort of deal, but no solution has been announced as of press time.

If the bill isn’t resolved in Albany, the city’s expected deficit would increase by a third — bringing it up to $3 billion dollars.

The Governor’s announcement of the planned summit indicated that the unresolved issue was less about the city and the governor’s office, and more about the yellow-taxi industry’s worries that giving livery cabs medallions, which have been picking up street hails illegally for years, would devalue their pricey medallions.

“The issues are not primarily governmental ones among the Governor, the state legislature and the City. There are, however, remaining issues among the various stakeholders, business and advocacy groups whose interests must be reconciled," yesterday’s statement read.

As reported by Capital New York, the Bloomberg administration was not invited to the summit until well after its announcement.

City Council Financial Committee Chair Domenic Recchia said this hitch in the Mayor’s plan puts “some big holes in our whole outlook — we’re one billion dollars short.” Reached the night Cuomo refused to sign the taxi medallion bill, Recchia said he was bringing the budget home to search for more sources of income. “I don’t know where we’re going to find this.”

Recchia said that the Council would negotiate with the Mayor and some version of the proposed cuts would be approved by the City Council, though it is unclear whether or not the Council would have a hearing on the matter, which Councilwoman Letitia James has called for repeatedly.

James told Gotham Gazette that she particularly found fault in the cuts to an after-school program that serves children in low-income communities and to the department of Health and Mental Hygiene, calling both cuts “disturbing.”

“The best way to disclose all of these cuts and more is for the Council to hold an oversight hearing,” she said.

"We should not sign off on a budget that has the kind of contracts you’re speaking so eloquently against today," he said, as his colleagues criticized high-prices for outside contractors doing work that critics say city employees could do. Since the Mayor took office, the city contract budget has grown by 70 percent.

Despite the huge gaps, Recchia added that “we have to stop nickel and diming the people of New York City,” referring to the fine and permit hikes the city has begun using to try and draw in revenue. The city also found income sources by raising restaurant fine enforcement, fingerprinting fees, and refinancing some debt.

But those fine hikes and other small changes represent a small portion of the city’s cost cutting measures, Doulis said.

“What they really did to generate savings in 2013 is that they refinanced some debt. That was one of the biggest sources of savings,” she said. “They've been trying to do that and shield the agencies from cuts, but it’s hard to see closing this budget without more cuts in addition to these.”

The refinanced debt will save the city $229 million in the coming year. Future cuts, Doulis said, will likely start eliminating core services more than ever before.

The Mayor’s cuts to the Sanitation Department have come under criticism, particularly in light of last year’s snow-removal disaster, but the Independent Budget Office’s Doug Turketsky notes that the majority of these cuts are cuts of attrition, as the Marine Transfer Stations the department would have staffed won’t be completed by 2013. He also added that there is a significant snow budget that covers winter weather costs.