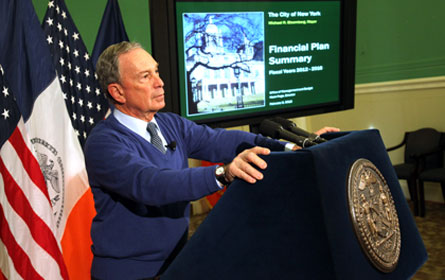 The mayor’s $68.7 billion preliminary budget released last week spares teachers and uniformed employees from additional cuts and won’t raise taxes. However, funding for many other programs will shrink to accommodate growing pension and health care obligations.

Programs targeted for the biggest cuts include after-school, child care, libraries and cultural centers, programs which have faced the chopping block many times in the past but have enjoyed protection from council members. The financial plan also proposes closing twenty firehouses across New York City.

The mayor called his plan “a responsible budget that continues to make responsible spending cuts, while protecting the core services and investments.” He added “Cities across the country have struggled to keep their heads above water â€“ laying off teachers, police officers, or firefightersâ€¦we’ve avoided those painful steps.” Last year, the mayor considered laying off 4,000 teachers. New York State pays only 39 percent of the city’s education expenses.

Councilman Domenic Recchia, the chairman of the city council’s finance committee, said that the plan was “not as bad as we thought it was going to be” and that it was balanced and fiscally responsible. However, he said, the council will push against cutting $74 million from libraries and $40 million from cultural institutions.

Public Advocate Bill De Blasio also criticized the mayor on cutting child care and after school programs, which he had repeatedly supported in the past. Cutting these programs could wreck many parents’ working schedules, potentially endangering their jobs and putting their children in uncertain situations, he said. The cuts would also affect employment in the day care sector.

“Living within our means must be our top priority. But we cannot stop investing in our future. This is why I am disappointed the Mayor put forth a budget proposal that hurts New York’s children and makes it harder for families to work,” said De Blasio.

Some council members, including De Blasio and Council Speaker Christine Quinn also opposed plans to shutter 20 fire houses, which they deem essential to public safety. A spokesman for the fire department said that the proposal is undergoing review and it’s too early for the department to comment on any specifics.

Last year, many of these programs faced cuts as well but the city council wrangled a concession to keep most of them, adding $300 million to the budget.

The city ran into an approximately $2 billion budget deficit this year, which it balanced through revising calculations for pension liabilities, using some of the previously reserved surplus and the sale of new taxi medallions. In a year, the gap is expected to grow to over $3 billion.

“Pensions are leveling off but at a high level,” said Doug Turetsky, communications director with the Independent Budget Office. “Which squeezes out other spending we might want to do on other programs and services.”

Turetsky added that health benefits are another major area of cost growth and that even though medical inflation is down, it continues to have a strong effect on the city’s economy.

Even though New York City gained back 65 percent of its jobs to the country’s 36 percent, its rebound is sluggish. Uncertainty in the Euro zone hit the returns on pension investments and the financial sector, which contributes about 10 to 20 percent of the city’s tax revenues didn’t add any jobs. Most of the city’s job growth has been in low-income positions. The residential real estate market remains very slow, which slows construction and drives down property tax revenues.

Commercial real estate is doing much better, with only a 9 percent vacancy rate and office space sales at their decade highest, according to Recchia. The city’s tourism industry is also booming, having attracted a record 50.5 million visitors in 2011. Many hotels are operating at full capacity.

Under the plan, the mayor proposed raising capital expenditures by $700 million over the next five years, to total $39.4 billion. Part of that would go towards the construction of the new NYCTech campus for Cornell University on Roosevelt Island, which is expected to provide 30,000 permanent jobs and create 600 spin-off companies.

The financial plan will go through agency hearings in March, when many programs will fight to lose as little as possible. But the overall sense among council members is that the plan, while not all desirable, is less painful than the budgets of previous years.

“Today’s Preliminary Budget, following on the Governor’s proposed Executive Budget last month, gives us all hope that the worst effects of the economic downturn are finally starting to pass,” said Recchia.