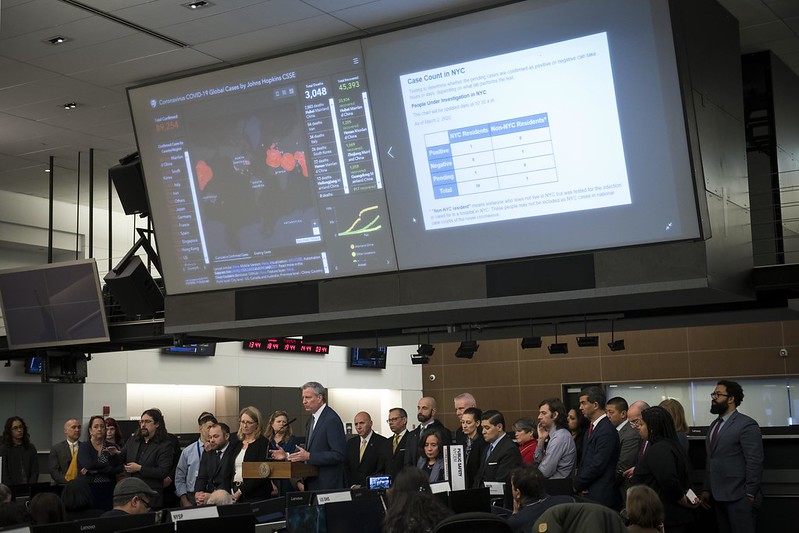 I’m writing this from my living room. My three-month-old daughter is across the room, sleeping in her activity gym. My wife is watching television. This should be another normal day, but all of us, including you reading this, knows it's not. Our daughter has barely seen her grandparents since February. My wife hasn't seen the outside world in almost two months. Aside from a few stressful trips along empty streets to the grocery store, neither have I.

Nothing about this pandemic has been normal — not even our response. The COVID-19 outbreak rekindles the darkness of Hurricane Sandy. No one knew what to do or where to go. By the time the government acted, it was too late. No master plan existed to deal with prolonged school closures, hold an election after a disaster, and mobilize large-scale relief efforts. Tragically that is still true.

There was no plan in place before the first coronavirus case was confirmed in New York City. The Greatest City on Earth is letting its people down time and time again because we fail to prepare for the next inevitable disaster.

The City of New York needs to do better, and I have a plan to make that happen. My first bill introduced to the New York City Council will be the New York Create and Learn Emergency Action Response Act. The NY CLEAR Act would create a five-level, color-coded alert system based on the post-9/11 federal system. New Yorkers should be able to know green means everything is smooth sailing; blue could indicate a closure or restriction due to standard winter storms; and red would mean the city is shut down in its current form.

The NY CLEAR Act would live up to its name by being concise and easily understood. It would be a universal language so our diverse communities all understand the severity of a situation. No matter which of New York City’s more than 200 languages you speak, you’d know that green means everything is fine — the city is safe. New Yorkers would know it’s safe to enjoy a park, go to work, or get on a subway that’s as unreliable as normal.

Blue would indicate the city is monitoring an evolving situation. This code should be in place when we send more police officers to Penn Station and other crowded areas after a terror attack, as we did the night of the 2015 Paris shooting. It would give New Yorkers a sense that the city is aware of a threat and is working to address it. Internally, blue signals to the Office of Emergency Management it must collect data on the event to adapt the city’s standard response plan.

Yellow means that threat is now inevitable. Hospital administrators would start implementing plans to increase supplies and staff. Alternate side parking rules would be suspended, while garbage pickups and mass transit service would be modified. Small businesses should take yellow as a warning that their hours might change or close completely.

Orange would mean the emergency is already happening — such as when the number of positive COVID-19 cases spiked over 1,000. Schools, courts, and all non-essential offices would immediately close. If severe weather has caused us to go orange, evacuation centers are opened.

Red tells New Yorkers that leaving their home is life-threatening. At this point, each agency’s specific emergency plan would go into place. Pre-identified roads will close to non-emergency vehicle traffic. City government should be ready to deliver food, protective equipment, and other life-saving materials door-to-door.

Imagine the number of cases we could have prevented, the number of lives saved, if city government had a wholesale plan in place for when a crisis strikes. Instead, our collective anxiety was compounded by the government operating on the fly — obviously without a serious plan for this type of situation and without the people of New York knowing how or being prepared to respond.

The NY CLEAR Act will make New Yorkers safer. Informational posters will be clearly displayed at every workplace alongside other key documents such as the Department of Labor’s “know your rights” sheet. Every New York City hotel room would provide a mandated pamphlet, so visitors can learn the emergency system quickly.The NY CLEAR Act should also be taught at an age-appropriate level in classrooms so young people will know how to adapt in the event of an emergency.

It is critical every New Yorker knows how to prepare for an emergency, and how to respond when the time comes. They deserve for New York City to declare an emergency at the right time, and for agencies to be held accountable for their responses. The NY CLEAR Act will mandate a hearing any time the city goes to yellow or higher. When a service is suspended, or when certain plans are put into place, it should require the city to conduct a wholesale look at whether protocols were properly followed and what we can learn to improve our response.

Crises have historically challenged us, well after the actual tragedy. We are judged both by our response in the moment as well as what we did to mitigate future catastrophes. Hurricane Sandy and COVID-19 both cost us too many lives. It’s time we learn our lesson and prepare. The next disaster will come. Whether or not we are ready, that much is clear.

***
Nick Roloson is a candidate for the New York City Council in District 22, in Queens. On Twitter @nickroloson.