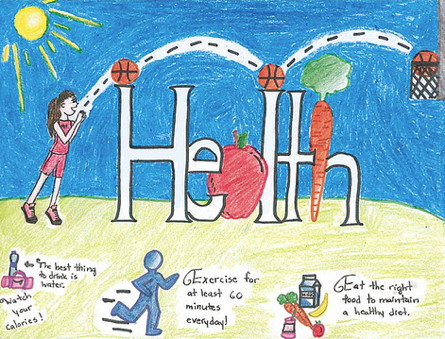 A winning design from the DOE's 2012 school wellness poster contest.

NEW YORK — A group of City Council members is trying to change the conversation about the obesity epidemic from soda to the lack of physical education in public schools.

In a letter sent earlier today to Schools Chancellor Dennis Walcott, the group of 34 led by Melissa Mark-Viverito and Letitia James, called for increased physical activity in the public schools, citing reports that they are not meeting state standards.

They also requested information on how much time children spend in physical education classes.

"With all of the public discussion about the mayor’s proposed ban on the sale of large sugar-sweetened beverages, we cannot neglect the critical role that physical activity plays in reducing obesity," they said in a statement.

The city's Department of Education responded by saying it had created an office dedicated to overseeing physical education, health education and wellness in 2003.

“We are helping schools provide a high-quality physical education, and through the obesity task force, we will be expanding fitness and wellness programs," said Deidrea Miller, a DOE spokeswoman.

The obesity task force was convened in January, with commissioners from major agencies, to find innovative policies to reduce the rates of New Yorkers who were obese or overweight. Among the proposals, the DOE said it would increase funding for health intiatives; create "wellness coordinators" to advise schools; and work to develop the connection between health and nutrition in cafeterias.

The proposed ban on the sale of sugary drinks in containers larger than 16 ounces at any food establishment that receives a health department inspection also came out of discussions by the task force.

The proposal has won praise from public health experts, and ridicule from comedians.

The Bloomberg-appointed Board of Health will vote on whether to pass the new soda regulation in September.

See the letter below: