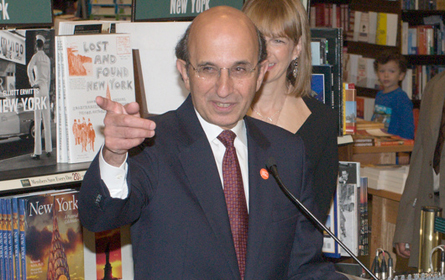 "It was never about power, it was about empowerment," said Sen. Pedro Espada Jr., on Thursday, having just switched back to the Democratic caucus to end a month-long power struggle between Democrats and Republicans in the state Senate. Democrats now have to deal with Espada in a position of power and also with the threat that any Democrat could follow in Espada's footsteps and break with party ranks whenever it serves them.

According to sources, had things gone just a little bit differently last week, Espada and his fellow "amigos," Sens. Carl Kruger, Ruben Diaz Sr. and Hiram Monserrate, could have been standing by the sides of the Republicans on Thursday.

A Democratic conference that was once led in a moderate way by Sen. Malcolm Smith, will now see its fate determined by its most extreme members. Some Democrats were devastated that their efforts to reach a power-sharing agreement with Republicans collapsed at the last minute. But now the Democrats find themselves part of a party ruled by the whims of Espada and his amigos, who on many issues tend to be more conservative than other Democratic members.

The splintering of the Democrats means bills with even a whiff of controversy could fail. Any progressive agenda Senate leaders had hoped to pass will now likely be stymied. Gay marriage is doomed this year, as is tougher rent regulation. But there is one contentious issue that Democrats have decided not to simply ignore: the governance of New York City schools.

With every passing hour it becomes clearer that the newly reshaped Democratic leadership structure will have to allow for more debate and dissension among its members. Individual senators have been empowered to speak out, bolt their caucus and, as Diaz demonstrated in the wee hours of Friday morning, vote against the wishes of their leadership.

Diaz voted with Republicans against a bill that would have approved mandatory surcharges for traffic offenses in Suffolk and Nassau counties. He later revealed that his vote was an attempt to get Republicans to oppose a half-percent sales tax increase for New York City that was backed by Mayor Michael Bloomberg and the City Council. Diaz openly begged Republicans to join him. "Show me that you are my friends. Show me that I can work with you when we need each other," he said. The sales tax increase passed, but the message was sent: The amigos, and now likely other disenfranchised Democrats, have no master.

As a result, controversial legislation is not likely to come to a vote for some time. Gov. David Paterson has said he will not force a vote on gay marriage. Diaz vehemently opposes the measure.

Rent control legislation, including a measure that would have done away with vacancy decontrol, is now unlikely to see the light of day, because Espada opposes it.

During the Democrats’ Thursday press conference, reporters asked Espada about those measures. Espada answered that the Senate eventually would enact reforms that would allow members to bring legislation to a vote as long as they have enough support to pass the bill. (As things currently stand, the majority leader has all the power to determine which bills come to a vote.) But those changes have yet to be instituted, and it is still unclear if or when they will be.

Against a backdrop of confusion and some rancor, Democrats are expected to bring the Assembly's school governance bill to a vote when they return to session on Wednesday. The Assembly bill, proposed by Speaker Sheldon Silver in the Assembly and Sen. Frank Padavan in the Senate, essentially extends the current system with minor changes. The mayor supports it. In the Senate, some Democrats are expected to introduce amendments that the sponsors say would "enhance" that bill. Those amendments are designed to increase the public's input.

Three amendments have been introduced -- one by Smith, one by Sens. Martin Dilan and Bill Perkins, and the other by Sen. Shirley Huntley. Smith's and Perkins' bills would fund parental training to the tune of $1.6 million to help them be more involved in the school system. Huntley's bill would not fund training, leaving it instead to the borough presidents.

Perkins has been outspoken in his desire to see mayoral control truly overhauled. "I will do whatever I can to prevent the continuation of mayoral control as it existed," he recently told the Daily News.

Perkins' bill would place a two year term limit on members of the board of education. "Each voting member shall serve a two-year term," reads Perkins bill. Perkins' and Huntley's bills would require one of the mayor's appointments to be a parent of a special education student. Perkins', Huntley's and Smith's amendments would also establish a citywide council of the arts to increase arts education.

Sen. Jose Serrano has pushed for other measures to increase arts education. (To read a commentary on arts education by Serrano, go to "Saving Arts Education from Politics.")

On school control, "there is a great diversity of thought amongst the members of the conference, to put it mildly," said Serrano, a former City Council member who voted in favor of mayoral control. He says he still stands by that vote would like to see school governance do more for arts education.

Serrano, who said on Monday he was still reviewing the proposed amendments, finds himself in a centrist position on school governance compared to his colleagues. Some Democrats want to leave mayoral control unchanged, while others, like Perkins, "say it has been a total disaster," Serrano said. A few Democrats have said they will do their best to stop the Assembly bill from becoming law.

There is talk that some of the senators who are most opposed to mayoral control want to see measures, such as the one proposed by Perkins, that would put term limits on the members of the educational policy panel and further reduce the mayor's power over school policy.

Austin Shafran, spokesperson for Senate President Malcolm Smith, said that Democratic members are "absolutely entitled to input into the final version of the bill." Shafran said that negotiations over the amendments are ongoing.

If Democrats in the Senate get behind the Assembly bill and then add amendments, it will almost certainly pass the Senate, as it has support from Republicans as well some Democrats. The amendments will face a stiffer test depending on what is negotiated and how Republicans feel about them.

A spokesperson for Padavan, who sponsored the Assembly's school governance bill in the Senate, said that the senator was focused on getting the Assembly bill passed and felt confident that it would succeed.

Even if the amendments pass the Senate, they cannot become law unless the Assembly returns to session and approves them. Assembly Speaker Silver made it very clear last month that he did not want to fiddle with the Assembly bill. If he has consented to the amendments in some sort of deal, they will almost certainly pass.

Shafran said that there had been discussion with the Assembly but declined to comment about what might result. He did say that the Senate is interested in "increasing parental input, which I think is something that we all can get behind."

For a number of senators, the proposed amendments, which were apparently negotiated with Bloomberg's office, do not go far enough. Some say the new amendments are intended to placate members who wanted to see more drastic changes.

Sen. Kevin Parker, who has sought greater reforms to school control, said on Monday night that a whole new bill is being negotiated. "Amendments might be how we get this done, but at this point I think we are negotiating a new bill," Parker, a frequent critic of Bloomberg, said.

Parker said that things have changed since last week, adding "My sense on mayoral control is that the landscape has dramatically changed because the Democrats retained control of the majority."

According to Parker, negotiations are continuing between Paterson, the Assembly and the Senate with "two points of real contention." The first, he said, is "whether the board on educational policy is an arbitrary board that basically serves as a staff meeting for the mayor or whether it has real input." The second, he said, is "whether the chancellor has the ability to arbitrarily close schools."

As for getting this all done by Wednesday, Parker did not make any promises: "If we can do it by Wednesday that is great but as I said to you about June 30, the deadline is arbitrary. Schooling is not being negatively affected." (June 30 was when mayoral control of schools officially expired.)

On Thursday before senators from both sides entered the Senate, Sen. Liz Krueger was asked about mayoral control. Although she generally supports the Assembly bill, Krueger would prefer to see increased parental input in city schools. But, as senators prepared to vote on legislation together for the first time in a month, she repeated her mantra on mayoral control. Despite the chaos and division that reigns over her party, despite the fact that she was uncomfortable with Espada, Krueger said as she had many times, with only a hint of exasperation, "We'll get it done."