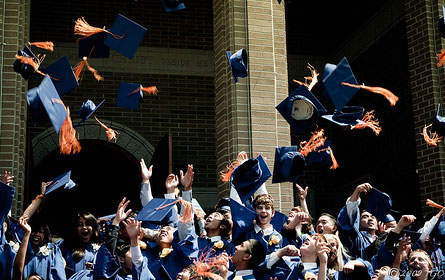 Photo (cc) Yume Photo
One of the more controversial aspcts of the comptroller's audit disputes the Department of Education's calculation of high-school graduation rates.

Two new audits of the city's Department of Education by mayoral contender and Comptroller William Thompson help explain some of the changes the New York State Legislature will apparently make in its reauthorization of the state law that gives Mayor Michael Bloomberg control of city schools. Specifically, the audits raise questions about transparency and accountability in the department, two issues that the state Assembly bill, approved by a wide margin in mid-June, addresses. (The state Senate bill, which is slated to be taken up on Thursday, has similar provisions.)

The bill also gives the Independent Budget Office new powers and resources to expand its analyses of the education department's budgets and performance measures. This should make for more transparent budgeting at the department and provide a useful supplement to the mayor's management report.

These new responsibilities will provide some sunlight to counter the strong control over the schools that the mayor and his chancellor will continue to have.

The need for more sunlight, transparency and accountability at the education department is illustrated by the two audits, one on the calculation of high school graduation rates and the other on the administration of state standardized testing in elementary schools.

Whatever their merits, the audits have been caught up in politics. Mayor Michael Bloomberg uses improvements in graduation rates and school test scores as evidence that mayoral control of the schools has been a success. But Bloomberg's mayoral control experiment will no doubt be a topic of debate in the fall mayoral campaign, where his opponent will most likely be the comptroller.

The audit's central finding is that the department "needs to institute stronger controls to ensure that official records corroborate the classification of students as graduates."

In a 38-page response to the audit, the executive director of Department of Education's research and policy support group calls "attention to two peculiarities in the comptroller's report." First, according to the response, the comptroller downplayed his own auditor's favorable findings. Indeed, the auditors, after much searching, found reasonable evidence that 195 of the 197 high school graduates in their sample had satisfied graduation requirements.

The second, the response states, "is the comptroller's strained efforts -- based on a clear misunderstanding of the requirements governing the storage of records -- to cast shadows on the hard work and achievements of the students, teachers, counselors and administrators in New York City high schools."

That's the polite part. The rest of the 38-page response slams the auditors for expanding the scope of the original audit plan, for not doing their homework, for not asking department officials for help, for rushing those officials to respond, and for ignoring the final confirmation of a 99 percent accuracy rate.

Subject matter aside, this offers a rare look at the conflicting views of reality as the final report lists the auditor's findings, prints the Department of Education's often heated responses, and then reaffirms the auditor's original findings.

To take one example, the education department argues that the auditors ignore their own confirmation of the accuracy of the department's calculations and focus "almost exclusively on minor quibbles about aspects of schools' use of a new automated tracking systemâ€¦ and raising unwarranted, unfair suspicions regarding school conduct, based on cursory and incomplete inquiry."

The auditors kick back at the phrase "minor quibbles," arguing, "Permanent records that do not reflect the graduation status of students, students receiving multiple credits for the same major courses, and inadequate grade change controls are indications that the controls over students' permanent records need to be strengthened."

Because high school principals are increasingly judged by their schools' graduation rates, the auditors say there should be a centralized, monitored system. Yet use of the "automated tracking system," a centralized computer program for high school transcripts introduced in 2003, remains optional for individual schools.

In any case, in its final response the auditors find the DOE "arguments refuting the findings we identified in this audit to be unsupported and without merit. Accordingly, we stand by our findings."

The second audit, released the next day, focused on how the department administers state math and English tests in grades 3, 4 and 5. The audit findings are generally positive: The Department of Education has established "adequate internal controls" and "procedures for the administration [of the test]," including memoranda to staff and staff training. Auditor reviews of department materials and sample observations on the day of the tests "did not reveal any instances of cheating."

The auditors did find, however, some "significant weaknesses" in administering the exams that the education department should address to ensure that cheating does not occur. The audit recommended the department provide additional oversight of testing monitors and look more closely at data that might reveal suspect patterns among school results. "DOE lacks sufficient preventive and detective controls [such as erasure analysis] aimed at deterring inappropriate manipulation of test scores," the auditors wrote.

The 58-page response, from the education department's chief accountability officer, much like the response to the graduation report noted above, does not give not an inch. That response says comptroller's report "ignores his auditors' entirely positive findings about the integrity of the tests and their results and makes a series of trivial debater's points, replete with clear mistakes and loud demands for changes DOE already made months ago. â€¦ One can only wonder why the comptroller would go to such lengths to find fault where clearly none exists." The auditors, in response, again stand by their findings.

an overview of Comptroller William Thompson's seven and a half year tenure, during which time he has issued 650 audits by 150 auditors. The article notes that several of the audits "lodged major criticisms of the administration's performance, called for significant changes in how the city did business and spurred strong reactions from Bloomberg appointees."

The June Assembly bill enhances the power of the city comptroller. The office will now review and register education department contracts, franchises and concessions -- as it now does for all other agencies. (The education department has avoided this by claiming at times to be a state rather than city-monitored agency.) The comptroller will be given the authority to do operational and programmatic audits in addition to financial audits "to the same extent that such comptroller has such authority for agencies of the city of New York."

The Independent Budget Office would be authorized to look at, among other things, graduate and drop-out data, enrollment projections, class size, service delivery, and Title I (federal) funding. In a November 2008 study of the costs of the new schools accountability office, the budget office complained about how hard it was to get relevant data. Now that office would be is "authorized to provide analysis and issue public reports regarding financial and educational matters of the city district, to enhance official and public understanding."

The legislation funds the Independent Budget Office's new work by requiring the city to add an amount equivalent to 2.5 percent of the budget of the mayor's Office of Management and Budget to the independent office's budget. (The city charter now requires the Independent Budget Office's annual funding to be 10 percent of the amount allocated to the Office of Management and Budget budget).

Overall, the Assembly bill does little to limit the mayor's political and administrative control of the schools. Although the bill adds parents to the city's Panel on Educational Policy and more access and a greater voice for parents and other members of the school community, the mayor retains the power to pick the majority of board members, thus maintaining policy as well as administrative control. However limited the changes, though, the expanded roles for the city comptroller and the Independent Budget Office will perhaps give the public a better sense of whether the recent comptroller audits have uncovered real management problems or are simply quibbles.