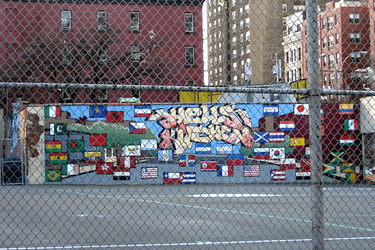 To many New York City kids, it is part of life in the city. Hold a basketball in one hand, hang on with the other and clamber over a 10-foot tall wire fence. These kids do not want to do anything wrong â€“ all they want is a little fun and exercise.

In a city with courts, playing fields, open space and greenery in short supply, the government has long ignored one key resource: its school playgrounds. Many school playgrounds are locked after school hours and so unavailable late afternoons and on weekends. Too many are used for parking, bleak asphalt wastelands without friendly play space or equipment. And too many school children never get to see trees and shrubs in their daily environment, or take advantage of their shade and the wildlife they attract.

Mayor Michael Bloomberg’s long-term sustainability plan calls for opening up school playgrounds for community use to help meet the goal of putting every New Yorker within a 10-minute walk of a park by the year 2030. But is the city using short-term stopgap measures instead of long-term strategies, creating play areas that may not last for even a decade? And will these areas really meet the needs of their communities?

In 2006, some 746 school playgrounds stayed padlocked weekends and during the summer, according to numbers compiled by City Councilmember Gale Brewer. All together, these areas totaled 948 acres of unused public land, an area larger than Central Park. (Another 257 were already open last year.) While no one argued New Yorkers would not benefit from the open space, the schoolyards seemed caught in a kind of limbo between the Department of Education and the Department of Parks ad Recreation.

That has apparently changed.

The mayor’s Schoolyards to Playgrounds plan unveiled earlier this year calls for eventually opening 290 schoolyards for use from 8 a.m. to sundown and on weekends. To finance this, the mayor put $3.5 million in the 2008-2009 budget and proposed another $107.3 million in capital spending over a period of eight years. While the playgrounds are maintained by the Department of Education, private and non-profit sponsors can contribute to improvements and support recreation programs.

A key partner for the city in all this is the Trust for Public Land. On October 10, the city inaugurated a renovated playground at PS 64 in the Bronx, one of 24 to be developed through a partnership with the non-profit trust. The organization, working with the education department, hopes to turn 25 schoolyards into new community playgrounds over the next five years. Money will come from the city, the trust, individuals, corporations and foundations.

THE QUALITY OF SPACE

The one clear step forward of Schoolyards to Playgrounds is that it will help meet the city’s enormous deficit in public open space. PlaNYC2030 identifies many pockets of city-owned property that are now only minimally accessible to the public. The city’s Department of Transportation, through its Office of Planning & Sustainability, is taking a hard look at the enormous asphalt jungle under its jurisdiction to see where there is potential for new public spaces. Large expanses of city roadway are underutilized, monopolized by small numbers of private vehicles and turned over to car owners for free parking.

The Bloomberg administration says that the opening of the schoolyards alone will allow more than 400,000 children and their families to be within a 10-minute walk of a park or playground by 2030.

But what will be in those parks? Sixty-nine of the playgrounds have opened without any major improvements. Another 185 were slated for physical improvements

By using manufactured turf on many these new parks, greater doses of capital funding are likely to be required to repair them long before the year 2030 comes around. And without clear evidence that the artificial materials being used will have no long-term negative health and environmental effects, the program could undermine PlaNYC2030’s promise of a healthier and greener New York

The city accepts industry claims that the manufactured products are safe for children and claims that they are cheaper than natural grass. A 2006 parks department report, “A New Turf War,” claimed that although it costs $675,000 more to install artificial turf, annual maintenance is $14,000 less than natural grass. Over the 23-year period of the 2030 plan, the city would thus save $332,000 on maintenance.

Most turf manufacturers, though, only warranty their product for eight years, and no one can say for sure how long it will last. With natural grass, regular maintenance means that it is continuously replaced and, in the end, this will probably cost less.

One big advantage of artificial turf is that it can be used year round and almost continuously. It is ready for use shortly after a rainfall, whereas natural areas need time to drain and dry out. It requires no use of polluting industrial fertilizers and pesticides.

But there are some big questions about the long-term environmental and health effects of manufactured turf. Artificial turf increases surface temperatures dramatically, not only contributing to global warming and the local “heat island” effect but possibly affecting the health of children using the fields. Reducing global warming is a major goal of PlaNYC2030. And the fake grass increases groundwater runoff into the city’s overburdened sewer system. The long-term effects on soil quality and underground water remain unknown.

Some studies show that the materials used in artificial turf, including recycled rubber, release volatile organic compounds, chemicals that are known carcinogens. In the absence of research examining the long-term health effects, many schools systems and governments have chosen not to use these products. Artificial turf may also increase the risk of certain types of injuries. There is an ailment called “turf toe,” a sprain where the big toe meets the rest of the foot, that, according to NYU medical center, is caused by “playing sports on artificial turf.”

The Trust for the Public Land’s model for school playgrounds involving community-based partners opens up many possibilities for change in city where neighborhoods often have little say in what goes on in their midst. At P.S.64, the trust worked with students from the school and residents and staff from the nearby New Settlement Apartments to plan the new playground. The space, which opened last month, features a track, sports field, basketball court, swings, play equipment, maps, trees and benches. The trust also got money to turn a blighted vacant lot adjacent to the playground into an outdoor classroom and garden.

The group has plans for 24 model playgrounds such as the one at P.S. 64. But, while it anticipates providing design workshops for people involved in developing the 161 other playgrounds, they will not necessarily have the same close collaboration that P.S. 64 enjoyed. The partner—in P.S. 64’s case, the New Settlement Apartments -- is responsible for organizing after-school programs. Without programming, the schoolyards could easily lapse into disuse and disrepair.

Beyond Hoops and Swings

The development of the playgrounds could strengthen the role of schools in communities and encourage neighborhood involvement. This would be a welcome change for a Department of Education that does not usually embrace the idea of community schools.

Because schools are one of the few city facilities in every neighborhood, they could become models and training grounds for ecological citizenship. In other words, they could be a lot greener than artificial turf. This is happening in school systems throughout the nation and there is no reason why it can’t happen here.

While PlaNYC2030 commendably continues the city’s commitment to replace aging school boilers, there is a long way to go before each building is retrofitted to maximize energy efficiency and the use of natural sunlight. We can also imagine solar panels instead of the ancient 20th century technology that relies on fossil fuels. And if schools become true centers for community activity, they could also generate more employment for community residents â€“ including people to maintain the grass and landscaped areas.

In New York City, lots of kids never have the sheer thrill of tumbling in dirt or mud during a soccer game. That is as important as preserving handball and stickball wherever there is asphalt or concrete. The Schoolyards to Playgrounds initiative is a step in the right direction, but it could become the first step in something far more ambitious and exciting.

Shira Siegel contributed research for this article, and is working on a longer working paper for Sustainability Watch about the school playground program.