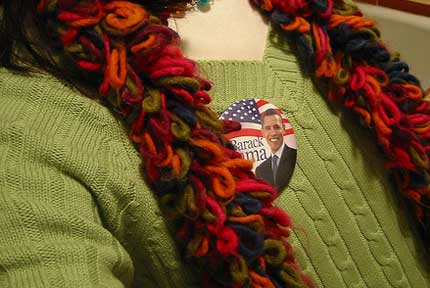 In the final days of the hotly contested and contentious presidential campaign, three New York City public school teachers and their union president commenced a federal lawsuit claiming a violation of their constitutional rights. The question was whether the school chancellor could bar plaintiffs from using union bulletin boards in schools to post political material; whether candidate-based political materials could be placed in mailboxes in Department of Education buildings; and the hot button issue of whether teachers could wear political campaign buttons in school.

The answer from a federal district judge in Manhattan was yes and no. Yes, the Department of Education can ban the wearing of buttons, and no, teachers and their union cannot be banned from displaying or disseminating political material on candidates in school on their bulletin boards in schools or among themselves. The result is that the judge denied in part and granted in part a request for an injunction against the city's enforcement of its regulations.

The school chancellor's regulations state that "while on duty or in contact with students, all school personnel shall maintain a posture of complete neutrality with respect to all candidates." Another section of the regulation says, "No material supporting any candidate ... may be distributed, posted or displayed."

Judge Lewis Kaplan agreed, and the city did not dispute, that an unconstitutional infringement of First Amendments rights would cause irreparable harm to the plaintiffs and all teachers. However, citing a series of cases that reached the U.S. Supreme Court, the judge concluded that the plaintiffs would be unable to establish that their freedom of speech or expression had been denied if they could not wear buttons on the job.

The judge referred to a case in which Supreme Court held that a public school could restrict a teacher's speech regarding matters of public concern only if the speech would harm the school's ability to operate efficiently or the teacher's ability to perform his or her job. That case involved a teacher who was fired for writing a letter to a newspaper criticizing the school system. The court found that the letter writing, which did not take place in the school, did not interfere with the school's mission.

Kaplan also looked to Tinker v. Des Moines, a famous case in which the issue was whether students, while in class, had the right to wear black armbands to protest the war in Vietnam. There, the Supreme Court concluded that the constitutional rights of the students could not be stopped "at the schoolhouse gate," and found in their favor, with the warning that free expression could be limited only if it interfered with school work or with other students. In a third case, which, as Kaplan put it, the plaintiffs invited him to follow, the U.S. Supreme Court ruled that a high school teacher could not be suspended for wearing a black armband in a similar protest of the Vietnam war, since it did not disrupt the educational mandate.

Kaplan took a different view, relying on another line of cases which concluded that school boards have the right to determine what is inappropriate in their classrooms and that reasonable restrictions could be imposed where they relate to legitimate pedagogical concerns. He emphasized the determination that students should not be exposed to views that they might attribute to the school rather than to an individual teacher.

In his ruling, the judge adopted this more recent reasoning, rather than the cases plaintiffs relied on. The judge borrowed the language of a California case that also involved teachers wearing political buttons during working hours. "Public school authorities may reasonably conclude it is not possible to both permit instructors to engage in classroom political activity and at the same time successfully disassociate the school from such advocacy" without the school board having to establish the disruptive nature of the activity or the wearing of buttons, Kaplan said quoting the California Court of Appeals.

Kaplan also looked favorably to a 2007 case in which another federal court upheld a school board decision not to renew the contract of a probationary elementary school teacher who had taken a political position in class. There, the court reasoned that students are a "captive audience," and said as an aside that a teacher's views could lead to "indoctrination."

In the recent New York case, known as Weingarten v. Board of Education of New York City, the school system feared that some students would misunderstand the personal nature of the buttons, and that the greater goal was to avoid "the entanglement of their public educational mission with partisan politics." The judge found no evidence that political buttons appearing in the classroom would lead students or their parents to the conclusion that they were expressing the views of the school system. Still, the question remained as to what authority the Department of Education has, and the opinion in Weingarten is that the buttons "might reasonably be perceived to bear the school's imprimatur or otherwise interfere with the accomplishment of defendants' public role."

In other words, the prevention of that possible perception would trump the First Amendment argument. This is based on the theory that the department has the expertise to determine the "needs, capabilities and vulnerabilities" of the school population, although the judge cautioned, in a kind of risk benefit analysis, that there was a balance to be achieved, which had to include the "sensitivity of [the department's] judgment to First Amendment values."

As far as the wearing of buttons, Kaplan concluded that the restrictions were reasonable and "reflect a good faith judgment by the defendants in their professional capacities about the impact of teachers' political campaign buttons in the school rather than a covert attempt to favor one viewpoint over another or a willingness to paint with too broad a brush."

Further, the judge decided, that in this instance, the Department of Education deserves the court's deference. To counter that, the teachers and their union would have had to have shown there was a likelihood that they could establish that the ban on the button was unconstitutional. Kaplan decided they had not done that and so he denied the plaintiffs an injunction against the ban.

On the question of disseminating information to teachers in the school building but not in the classroom and not to students, the court reached a different temporary conclusion that will be considered as the litigation continues after Election Day.