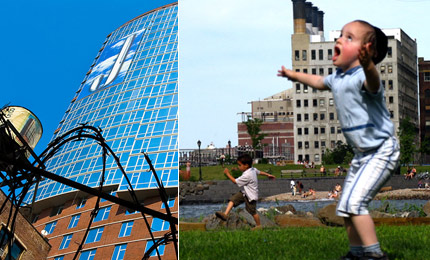 The current flurry of new luxury housing construction in New York City has created a number of quandaries for the city's public schools.

The influx of students threatens to undermine the quality of nearby schools --often the very thing that helped attract young families in the first place. To further complicate matters, the high land values that good public schools help create make it increasingly difficult for the city to obtain land on which to build new ones. Developers see the expensive real estate as appropriate for only the most profitable projects, and that does not leave much room for schools.

State Sen. Liz Krueger, whose Upper East Side district includes some of the most severely affected areas, has been urging developers and the Department of Education to find solutions. "Given the value of real estate in New York City," she said, "why should we have any schools, firehouses, or police stations at all?"

The joke is grimly funny because these are essential amenities. But that doesn't make it any easier for the Department of Education to find land for a school in Midtown or Downtown Brooklyn.

Some of city's most seriously overcrowded schools are in the priciest of Manhattan neighborhoods. Six out of eight elementary schools on Manhattan's West Side are operating at more than 100 percent capacity, according to a letter sent to Schools Chancellor Joel Klein by a number of Manhattan elected officials, and several have had to give up teachers' lounges and art classrooms to make space. PS 116 in Murray Hill recently hit 113 percent of capacity as new housing went up all around it, the area's City Council member, Daniel Garodnick, has said. As a result, some students eat lunch at 10:30 a.m., and the school has dropped pre-kindergarten classes and classes for the gifted, according to the Daily News.

The problem extends beyond Manhattan: A recent report by Comptroller William Thompson identified nine areas where the Department of Education's current five-year plan for new school construction will not meet anticipated population growth. The list includes sought-after districts like DUMBO, Downtown Brooklyn, and Long Island City alongside burgeoning immigrant neighborhoods like Flushing and Sunset Park. Some 3,000 new apartments are being planned for an area around one school in DUMBO -- PS 287 -- but the department has no plans for any new schools in the area, according to the comptroller. Similarly 2,300 new homes are currently slated for the Upper East Side -- but just one project that would add school seats, the report said. It also found the average elementary school in the area was operating at a debilitating 129 percent of capacity.

Under city law, developers are not required to mitigate the effects their building would have on schools or infrastructure such as subways and roads. (See related story). Given that, city administrators and elected officials have had to be creative about finding ways to convince builders to help address school overcrowding. The strategies for getting additional classrooms tend to fall into one of two categories depending on whether the land is publicly or privately owned.

When the City Has Land

If the city owns the land for the new school, the building can become a project of the Department of Education's Educational Construction Fund, or ECF, an agency that offers developers the chance to build on public land in exchange for funding schools. The fund does not sell the land it gets from the city. Instead, it issues a request for proposals, picks a developer, then rents the property long-term in exchange for the developer's agreeing to plan and pay for the construction of a school on the site.

There are currently two ECF projects under way. One will provide a new home for East Side Middle School, or MS 114, at the same 91st Street and First Avenue location that PS 151 occupied until 2000. The new school will seat 540 students-190 more than the school's old building at 78th Street and York-in a five-story red-brick structure next to the Azure, a 34-story luxury apartment building slated for construction on the same site. The DeMatteis Organization and The Mattone Group, the project's developers, will pay the entire $45 million cost of building the school.

On May 30, the site came to public attention when a crane collapsed there, killing two people and damaging nearby apartments. When the New York Post learned about the city’s involvement through the construction fund, it blamed the city for the accident. But the incident points to a deeper problem with public/private partnerships. While the director of the Educational Construction Fund, Jamie Smarr, said the developers the fund contracts must follow the same regulations and procedures that the city would when building a school, it’s likely that a developer accustomed to cutting corners will continue the practice when working on a public building.

Staff at East Side Middle school said that they believe the project will proceed in spite of the accident, although work on the site has stopped and they have not been told when the new facility will be completed.

The other project, at 57th street and 2nd avenue, is larger and more complex. The developer, World Wide Holdings, Inc., will replace the High School for Art and Design, rebuild PS 59 with 730 seats rather its original 400 and add an additional school on 63rd Street at a site that students from the other two schools will use as a temporary location during construction.

Not everyone applauds the project, however. Krueger acknowledged that some members of her community "say 'enough is enough' when it comes to new high-rises." But, she argued, at least these buildings offer essential amenities. "The developer is being responsive to the needs of the community," she said.

For their part, company officials described the Educational Construction Fund as a responsive and efficient partner. "The request for proposals process was fair and transparent and took place in an efficient amount of time," Terry Stanley, the co-manager of the 57th Street project, said.

Things can get more contentious when a development is going up on private land. Then, communities must use the various approval procedures to try to get schools included. Requests for rezoning, the city's land use process -- known as ULURP -- and City Council votes all provide some opportunities for neighborhoods to make demands. However, the amount of leverage the community can muster depends more on whether a rezoning is needed than on the urgency of their needs.

Two current cases in this category involve Sheldon Solow and Bruce Ratner, developers not known for harmonious relations with local groups. Solow has proposed converting the former Con Ed site along the East River from 34th Street to 41st Street into a complex of residential and commercial towers. The developer's Environmental Impact Statement estimated that the project would add 417 new students to the already strained local schools, an increase that U.S. Rep. Carolyn Maloney projected would bring them to 164 percent of capacity by 2014. Originally the developer said the city could bus those students to other areas.

Fortunately for the students, the particularities of the project gave officials plenty of leverage. "Remember," said Garodnick, who was active in the fight to put a school in the project, "they were looking to rezone the site from a manufacturing zone to a zone amenable to both commercial and residential uses. The council could have rejected that rezoning."

Eventually, Solow's firm agreed to include a school in its plan, although the 630 seats slated for the project will do little more than cover the new development's own residents.

Of course, the arm-twisting can go both ways: Bruce Ratner, who agreed to build a school at his Beekman Plaza development in Lower Manhattan, recently threatened to cease construction on it unless he received a 421-a tax abatement valid for 20 years.

Planning for the Future

Pressure tactics aside, will these public-partnerships do enough to abate school overcrowding? Smarr, the Educational Construction Fund's director, thinks they will. He said the city took a step forward when it reactivated the fund after a nearly 30-year hiatus. Additionally, the Department of Education's current five-year plan includes the "record amount" of 63,000 new schools seats.

Yet many elected representatives remain unsatisfied. Gale Brewer, the City Council member from Manhattan's Upper West Side, has been arguing for years that the city must reconsider how it measures overcrowding. Currently, the city looks at an entire community school district, which includes dozens of schools and many neighborhoods. "If you ask the Department of Education if school district three is overcrowded, they'll say no," she said, "because the area north of 96th Street is not."

She blames this system for what she sees as the department's failure to address overcrowding in the southern half of the district and a missed opportunity to build a school in the Riverside South project. There, the developer Extell actually handed the city a site, but the Department of Education has not committed to build a school on it because the district, according to the city's numbers, is not overcrowded.

The department has said it will consider Brewer's suggestion on how to measure overcrowding next year.

Other proposals look beyond the Department of Education to ask deeper questions about the responsibilities of developers in today's New York City. Krueger, for instance, suggested that the zoning laws be changed so that developers be encouraged to focus on essential amenities, such as schools, rather than minor ones like small pocket parks. And Garodnick is working with City Council Speaker Christine Quinn and Education Committee Chair Robert Jackson to research a possible bill or charter change that would "more directly tie new developments to new school construction."

Would Garodnick require developers to help build schools for the new residents they bring into neighborhoods? He's not sure yet. "It's a conversation we're having with the Department of Education," he said.

There is, of course, a danger in transferring too much of the responsibility for school construction to developers, who are not elected and don't necessarily act out of public interest. And this is just one idea under consideration. Under the banner of Scott Stringer's recent call for a "war room" of new school planning, elected officials seem to agree that the city must adopt measures to take into account the pressures that new developments put on local schools. What form that might take remains to be seen.

James Trimarco is a journalist and consulting editor at Yes! Magazine. Â