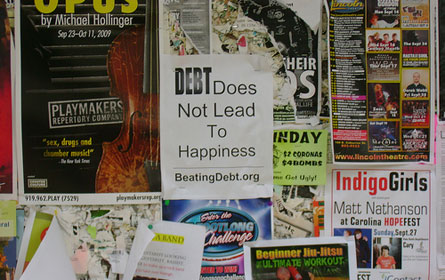 When Joshua Fensterstock, a 2003 law school graduate living and working in New York, consolidated his student loans by borrowing from Education Finance Partners, which is serviced by Affiliated Computer Services, Inc., he agreed to the terms of the contract they sent him. In fact, he had no choice.

Loan applicants don't generally read the terms set out in standard mortgages, loans and credit card agreements. They are usually in very small font, in legal language and, in any case, non-negotiable. That is, an applicant for a loan or a credit card, cannot negotiate the interest rates, fees, or any other terms. It's a take-it-or-leave-it document.

Those procedures, though, could change. A three-judge bench of the federal appeals court for the New York region has determined that two significant clauses of Education Finance's agreement with its borrowers are unconscionable and unenforceable under the applicable law. The contract, which requires disputes be resolved by arbitration rather than court action, was stricken in July as being an unbalanced, unfair take-it-or-leave-it document in which consumers had no bargaining power. The court also struck a clause that required borrowers to give up their right to participate in class actions.

When Fensterstock applied for the loan in 2006, two years after he received his license to practice law, he accepted the terms as offered. But he later realized that his payments were improperly apportioned between interest and principal. He filed a federal lawsuit alleging that the defendants "engaged in fraudulent and deceptive practices in connection with the solicitation, consolidation and servicing of student loan." But the lenders insisted on alternative dispute resolution -- arbitration -- and not court action, because that was part of the loan agreement.

Fensterstock’s agreement, like most transactions with banks and credit card companies, included a binding arbitration clause. Consumers may consider arbitration more informal and cozier than litigation in a courtroom. However, while courts are public and basically free -- aside from the expense of hiring an attorney -- arbitration is costly and far beyond the means of most people with student loans. While the plaintiff and defendant sometimes split the fees, more frequently the loser must pay.

In addition, whether the borrowers or card users have lawyers or represent themselves, the bank will always have a major law firm on its side. Its lawyers, along with the arbitrators, will charge huge hourly rates that the borrower may very well end up having to pay.

In signing the agreement, the borrower gives up the right to sue in Small Claims Court or other civil court, since the bank or credit company would demand arbitration. Not only that, but arbitration involves one claimant at a time, not the entire pool of individuals with similar contracts.

The Education Finance Partners' agreement also included a provision in which the borrower gave up the right to participate in class actions. When many borrowers get together as a class to try to seek redress in the courts, they can be very forceful. Individuals might not realize how their payments are being applied, for example, or take on a battle with the lender.

In ruling on Fensterstock's suit, the U.S. Court of Appeals for the Second Circuit, in Manhattan, just handed him a major victory. In a decision written by Judge Amalya Kearse, Fensterstock won the right to form a class action with others who entered the same agreement with the defendants. He also won the right to litigate in federal court rather than submit to arbitration.

Shortly after he graduated from Hofstra Law School in Hempstead, N.Y., and become a lawyer, Fensterstock had accepted the defendant's offer to consolidate his student loans into a single loan of $52,915.49 at an annual interest rate of 9.32 percent. At the end of the loan period of 29 years, he would have paid approximately three times the amount with monthly payments being applied "first to charges, costs and fees; next to unpaid interest and then to principal."

Fensterstock's payments were due on the 14th of every month, and he always mailed them in ahead of that date. After seven months, he had paid $7,051.84 but he realized that by far the largest share of his payments was being applied to interest. In other words, his debt was being reduced by only $17 a month.

This, he was told was because payments had to arrive on exactly the 14th -- not sooner, not later. On this basis, he calculated, there would be "an enormous" payment due at the end of the loan period -- not a final payment of $335 as he had been told at the inception.

Though Fensterstock was in New York the agreement said the "note will be deemed to have been made in California ... and governed by federal laws and the law of the State of California," where defendant was incorporated. (The co-defendant is a Delaware corporation.)

Consumers don't choose creditors on the basis of where they are incorporated, whether it be California, Delaware or North Dakota, for example. The plaintiff being in New York, and the lender being a California company, two different states, explains why the lawsuit was filed in federal court, and why the federal court located in Manhattan applied California law. The loan agreement, as prepared by the lenders' attorneys, could have specified another state, one less friendly to consumers in this type of situation, but they chose California, which takes a dim view of such contracts.

Fensterstock argued that under California law, "when an arbitration clause requires a consumer to waive the right to bring claims on behalf of a class, that waiver is unconscionable if ... it is alleged that the party with the superior bargaining power has carried out a scheme to deliberately cheat large numbers of consumers out of individually small sums of money. The party with the superior bargaining power drafts the contract and requires the other party to either accept or reject the contract in full. ... Such waivers are 'indisputably one-sided' because they operate to insulate a potential defendant from liability since any one plaintiff's damage will usually be too small to justify bringing an individual claim."

Citing various federal cases, the court said, "Individual actions by each of the defrauded consumers is often impracticable because the amount of individual recovery would be insufficient to justify bringing a separate action; thus an unscrupulous seller retains the benefits of its wrongful conduct. "

On the other hand, it continued, "A class action by consumers produces several salutary by-products. ... A company which wrongfully exacts a dollar from each of millions of customers will reap a handsome profit; the class action is often the only effective way to halt and redress such exploitation."

Because Fensterstock was a lawyer, albeit for only two years, the creditors argued he should have understood what he was signing and so, they said, Fensterstock was bound by the arbitration clause and had given up the right to a group lawsuit.

Kearse disagreed, writing, "Fensterstock was just three years out of law school. And although the expertise he had gained through representing clients in financial transactions may show that he was well aware of the presence of the ... class action and class arbitration waiver clause, we have seen nothing in his education, experience or expertise to suggest that he had any meaningful opportunity to negotiate that clause out of the contract."

Now the two controversial clauses have been ruled unenforceable in all contacts with the company, a class of many thousands will be formed, and litigation will continue in the federal court in New York on the issue of how the payments made by borrowers is applied to their debt.

The implications of the case may be very widespread. However, courts in other federal circuits could reach different conclusions about the laws of various states. In the end, the matter may be resolved not by arbitration or litigation but by the Supreme Court of the United States. But the offending clauses in the California agreement are out and unenforceable.